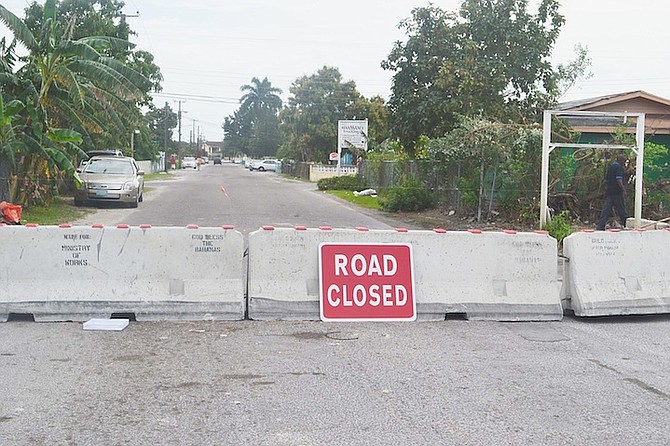 Barricades put in place to close Tucker Road, as part of the plan to develop the College of the Bahamas into a university.

THE Ministry of Works and Urban Development has closed Tucker Road – between Water Street and Thompson Boulevard – a significant milestone as The College of The Bahamas transitions to the University of The Bahamas, school officials said.

The road closure took effect following an announcement from the ministry that was initially gazetted in November 2014, according to a statement from COB.

Since Tucker Road west now ends at Water Street, the rest of the roadway has become a part of the Oakes Field Campus and will be transformed into the formal entrance for the University of The Bahamas.

“The proposed new entrance boulevard will bring cohesion to the southwest quadrant of the Oakes Field Campus. It will create a distinctively welcoming and monumental feature that will define the university’s presence. Bordering the entrance boulevard will be four new academic facilities – the Franklyn R Wilson Graduate Centre, currently under construction, the GTR Campbell Small Island Sustainability Complex, a new museum and fine arts building, and a new science building,” COB said.

“The plan is that the arts building would be positioned directly across Tucker Road so that would be the first building of those four buildings that you would see. The other buildings would be adjoining it or in the back of it,” explained COB’s Vice-president of Operations Ronnie Stevenson.

He added that there will also be opportunities for public engagement in the proposed changes to the college’s Oakes Field campus.

“We are very grateful for the tremendous show of support we are receiving from the public and private sectors as we transition our College to the University of The Bahamas,” he said. “Internally, several task forces have been mobilised and are meeting weekly to expedite this process. The task forces are focused across several areas, including the financial and administrative, technology infrastructure, academic programming, and, of course, our physical infrastructure. The closure of Tucker Road is a part of the latter and represents a significant announcement to the country that we are moving forward.”

“Under the chairmanship of Alfred Sears, the College Council is providing excellent oversight of this process as the college moves ahead with implementing the guiding blueprint entitled ‘University of The Bahamas: The Road Map,’” he added.

As the master plan is a significant step in the transition process, COB invites stakeholders to read the document which is accessible online at: www.cob.edu.bs/Council/MasterPlan.pdf

Didn't know about this until I went to pick up my daughter from last week's first week of classes. A massive inconvenience as it also increases traffic on Poinciana Drive. Hope they also do something about the Portia Smith Building where student services was located. If she were my relative I'd would ask her name to be removed ; the building looks disgraceful! Lots of plans for building, but any plans for parking? Less expensive landscaping would be one way to go. Reduce the size of the grassy area area near the new library and fountain so people can actually park.