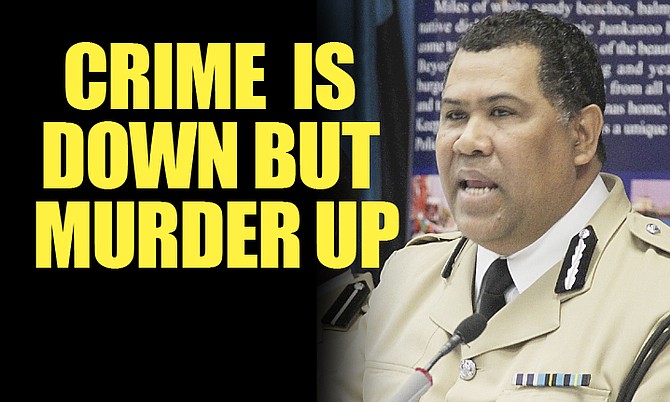 DESPITE a three per cent increase in murder last year, Police Commissioner Ellison Greenslade said yesterday that serious crimes in the Bahamas decreased by 18 per cent in 2014 compared to 2013.

The commissioner said despite the best efforts of the police, the Bahamas still recorded 123 murders, an increase of 3 per cent over the figure of 119 that was recorded in 2013.

He blamed prolific offenders for the high murder rate.

“This is a troubling reality which has generated significant fear and cause for concern across the communities of the Bahamas,” he said at a press conference at police headquarters.

“We have noted that a hardcore group of prolific offenders are one of the main reasons for the high murder rate. These prolific offenders are known to reoffend upon being released from prison and return to communities, after being charged with serious criminal offences, including murder and cause serious harm to people,” Mr Greenslade said.

The commissioner said 65 persons were arrested and charged with murders committed in 2014 – a detection rate of 43 per cent.

However, he said a number of cases are currently being reviewed by detectives at the Central Detective Unit and further charges are expected to be brought against several persons who are being sought by police. He also said the detection rate is low because in some cases, the public is “not helpful”.

Of the 123 murders recorded last year, 88 per cent or 108 were recorded in New Providence, 10 in Grand Bahama and five in the Family Islands.

Eighty-three murders, or 67 per cent, occurred on the streets and 15 per cent in a home.

Of the murder victims last year, 16 were killed in May; 14 in April; 13 in August and December; 11 in January, March, October and November; eight in February; seven in July; and four in June and September.

Retaliation was the main motive for murder in 2014 with 44 cases, followed by conflicts between individuals, 17, robbery 13, and drugs, 12.

The statistics also show that crimes against property decreased overall by 20 per cent.

The commissioner said he intends to retain the same policing plan in 2015 as the 2014 plan yielded “great results”.

However, he will “tweak” the plan in certain areas to combat murder, which continues to challenge police.

Comrade Commish Policemen's what the statistics don't but damn-well better start addressing, is the high degree of the pettiness of it all. Most times when reading news accounts yet another murder, shooting or stabbing or a court reporter's trial story, I am struck by the what can get you killed in our Bahamaland. How we this small bunch, often still in their 'youthful' years are prepared to kill or harm another human being, over the most trivial things. It could be as simple as looking at them in what they perceive be the 'wrong' way. Unfortunately, for the law abiding citizen or visitor, just being in wrong place at wrong time can get you killed.

The numbers as presented by the COP may be politically correct and properly categorized by the evolving crime statistician system ................. but ask the "man on the street" if he feels safer now compared to 5 or 10 or 20 years ago.

Let's pay, not commit crimes. Comrades maybe the 3% increase in murders is proof that the calls to use armed policeman's force and filling our court rooms and jails, both which we all know have not and will never work to make you and loved-ones feel more safer. What if we could combine taxpayers and the business community to fund effective community programs, where we offer cash payments to potential offenders, not to shoot or stab another human being? Comrades we can 'pay or pray.' So, take you must decide as a citizen to remove your blinders to make a quick decision, before it escalates from an increase 3% to 20%? Plan your grave digging, cuz soon - you too or a loved one, could very well be included among the murdered?

Barak Obama said in his state of the nation address last night that not only is crime down in the United States but so is the number of people going to jail. BUT unemployment in the United States is also down. Unemployment is at its lowest level in 10 years in the US while here in the Bahamas it has climbed beyond pre PLP levels. The credibility of the commissioner is not one that ordinarily come into question and he has always maintained that murder is directly related to gang and drug activity. The drugs and the gangs and the supply of guns on the street are all interconnected and once a young man gets caught up in this web of activity he will most likely pay with his life. Drug dealers recruit both on the demand and supply side and many drug dealers are also gun dealers who use the sale of these contraband to fund gang activities. The commissioner must now move to identify gang leaders and drug dealers and force them off the streets and flush them out of communities they use for cover. Then the murder rate will go down. Too many young men are being lured into drug and gang activity and it is too late when they find out the only exit is in a body bag.

Then the additional courts that were promised to help keep repeat offenders off the streets and to help with swift justice have not been delivered after some two years. Then when you see who got the contract to complete these courts, you can only look at this government and say "Dey ain't serious"

Unfortunately, for the 123 murdered just in 2014, no amount money or tougher justice, more new courts or judges can bring them back from their graves pick up where they left off with their loved-ones and friends. Comrades even knowing that, how is it possible that it would not make sense to buy commitments, not to inflict physical harm or murder another person? Remember, we have tried all the rest ideas and the figures continue escalating higher year over year?

these niggas mussy think we all really stupid to believe this shit. say crime down 18%. shut y'ass up!

It was disheartening to hear that police plan to 'swoop on persons known to have unlicensed shotguns or rifles, then arrest them and seize their weapons.' There are reportedly some 80,000 shotgun and rifle license holders in the Bahamas but 16,000 or around 20% of these weapons have not been licensed. Before the police make any such raid they should extend to these delinquent gun owners the opportunity to go in and regularize their licenses. Government has only recently tripled the fees for licensing shotguns (from $50.00 to $150.00 with similar increases for rifles). Persons who pay late are required to pay a $50.00 late fee on top of these fees, so many license holders may not be in a position to pay, especially if they have more than one weapon. Rather than trying to brand these individuals as criminals (less than one percent of licensed guns are used in crimes) the police should advise these persons what to do if they cannot afford to license their guns. In any event surrendering these guns to the authorities and losing ownership of it beats being arrested, and facing a possible fine of $2,000 and jail time for each weapon. It is petty for the police to brand these persons as criminals if they are simply facing economic hardship.