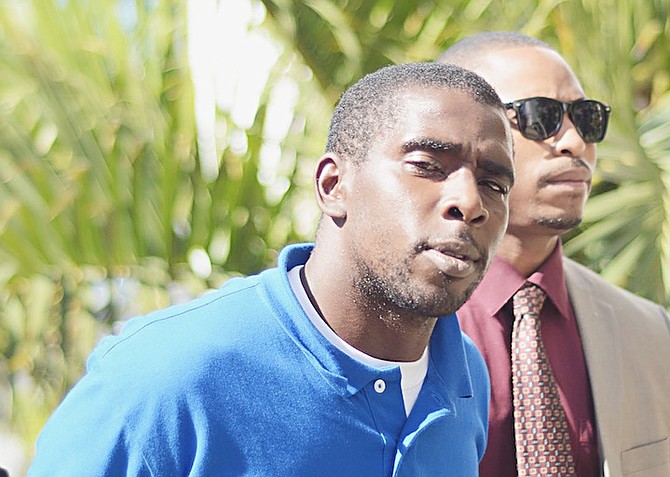 A MAN recently acquitted of murder found himself back before the courts yesterday facing serious charges, including murder.

Axanthio Patrick Thompson, 27, of Sea Breeze Lane, stood before Magistrate Andrew Forbes to be arraigned in connection with the death of Loren Jermaine Rolle, who was shot and killed in front of a home in Yellow Elder Gardens in November.

Just days earlier, Thompson was cleared in the Supreme Court of the May 30, 2012 late-night fatal shooting of Aaron Hepburn in The Grove.

In yesterday’s proceedings, Thompson was informed that he would not be required to enter a plea given the nature of the offence.

Magistrate Forbes then told the accused that he was “charged with murder contrary to Section 291 (1B) of the Penal Code, Chapter 84 and it is alleged that you, on Friday, November 28, 2014, at New Providence, did intentionally and by means of unlawful harm, caused the death of Loren Jermaine Rolle.”

“Do you understand the charge?” the magistrate asked.

He was further charged with assault with a deadly weapon that was allegedly committed on December 19, 2014. He denied assaulting a man with a handgun and opted to be tried in the Magistrate’s Court.

He will appear before Chief Magistrate Joyann Ferguson-Pratt on January 27 to be given a trial date.

Though the court had the discretion to consider bail on the assault charge, Magistrate Forbes noted that Thompson had pending matters before the court relating to firearms and would deny bail on that basis.

Regarding the murder charge, the magistrate did not have jurisdiction and remanded Thompson to the Department of Correctional Services until his reappearance in court, where the case would be forwarded to the Supreme Court.

Thompson was advised of his right to apply for bail in the higher court.

Thompson has retained Jomo Campbell to defend him.