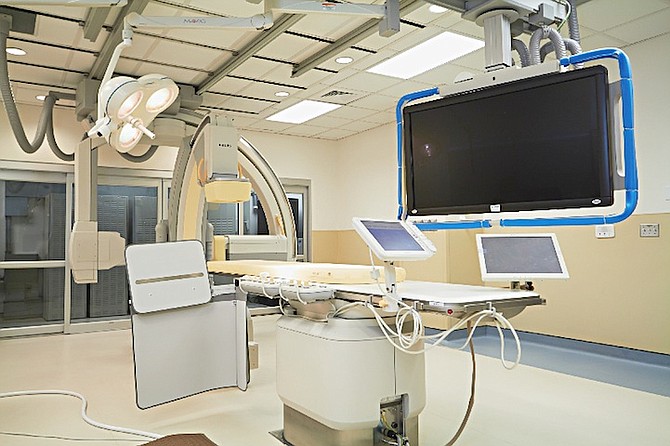 OKYANOS has started adult stem cell treatments at its clinic in Freeport, with patients experiencing some “remarkable” benefit from cell therapy, according to CEO Matthew Feshbach.

The facility has treated approximately 40 patients since it opened last October.

The Tribune got the first exclusive press tour of the $10m state-of–the-art clinic that is equipped with a world-class Philips Cath Lab – the first of its kind in the Bahamas and the Caribbean.

“We treated patients with a perfect safety record, and patient satisfaction has been extremely high,” said Mr Feshbach, who commends the Bahamas government for putting a rigorous regulatory framework in place for stem cell therapy and research.

He revealed that they are seeing early benefits in some patients treated at the clinic.

“While not all patients are far enough out to judge, those that are have shown benefits, with many having had remarkable outcomes,” he said.

Of the 40 persons treated so far, heart patients accounted for about 20-25 per cent.

Mr Feshbach said cardiac cell therapy is the new option for “no option” persons who have had heart attacks, bypass surgery, stents (mesh tubes used to treat weak arteries), and are on medication, with no improvement in their symptoms and a diminishing quality of life.

He said they have also treated persons with autoimmune and orthopaedic conditions.

“We have seen patients with rheumatoid arthritis, and fibromyalgia; patients with bone on bone knees and hips, shoulder injury, etc, and are no longer planning joint replacement or surgery; and we have also treated patients with Multiple Sclerosis (MS) and Parkinson’s disease and have seen some early signs of benefit,” he reported.

Okyanos obtains stem cells from a person’s own body fat. Mr Feshbach said they harvest the fat through water-assisted liposuction.

“Instead of the traditional liposuction using a device that tears the fat, we irrigate the fat out with water which provides a higher quantity of viable stem cells,” he explained. The adipose tissue goes into a device, which then separates the stem cells from the fat. The stem cells are injected either directly into the heart, joint and other tissue, intravenously, or a combination of both.

“It is an outpatient procedure, even for heart patients,” Mr Feshbach said. “They have a pre-op exam the day before; they come in the morning of and do the entire procedure, including fat harvesting, cell processing and stem cell infusion in the same day.”

The clinic, which occupies the entire third floor of the First Commercial Building, has five spacious recovery rooms where patients are taken after the procedure. A very sterile environment is maintained by sophisticated air-purifying systems.

“We can treat 1,000 or more patients per year and still keep it personal,” said Mr Feshbach, who reports that patients are coming from Mexico, Australia, Italy, Switzerland, the United States, and from the Bahamas.

He indicated that about 20 per cent of persons treated so far were Bahamian patients from Grand Bahama and Nassau.

Okyanos is changing the way medicine is done today, said Mr Feshbach, who has been able to raise $16m in funding, $10m of which has gone into the construction and equipping of what he calls, “the first cell therapy centre of excellence in the world”.

“Rather than relying on surgery, drugs and devices, cell therapy harnesses the power of a person’s own biology to meet unmet medical needs,” he said.

“When I started this business I did not know that cells were so applicable to many conditions, and I would have been very sceptical, but the science has really progressed to support the treatment of many conditions with a person’s own adult stem cells. The real future of medicine is to use your own stem and regenerative cells without having to alter them to repair your body.”

Mr Feshbach believes that the bureaucratic system in the United States has resulted in the very slow approval of medical devices for stem cell treatment there, averaging five years after approvals in Europe, despite comparable safety records between the two places.

He said the clinic in Freeport is built to be “above US surgical centre standards”.

“We do everything at the highest standards and it makes patients feel safe –- they get a safe procedure and better outcome.”

The facility employs close to 40 persons, which includes over 30 Bahamians.

“We have plans to train some Bahamians in nursing, and others in patient liaison,” he added.

Mr Feshbach believes that the regulatory framework put in place by government for stem cell therapy and research will elevate the Bahamas to a leadership position in the field internationally.

The Stem Cell Research and Therapy Bill was passed in Parliament in 2013, with accompanying regulations passed in September last year. The legislation provides a regulatory regime covering all aspects of stem cell research, namely clinical research, non-clinical research and therapeutic uses and prohibits procedures that are unethical or without scientific foundation. Facilities or laboratories used for stem cell research or therapy must obtain a license under the Hospital and Health Care Facility Act.

The regulations deal specifically with the creation of three key committees, namely the National Stem Cell Ethics Committee, the Scientific Committee and the Compliance Committee. These will oversee and monitor the stem cell industry in The Bahamas.