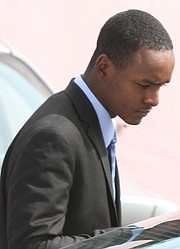 A policeman arraigned in Magistrates Court yesterday denied defaming a female acquaintance by posting a nude image of her on Facebook.

Constable Christopher Thompson stood before Chief Magistrate Joyann Ferguson-Pratt facing a charge each of intentional libel and causing harm, which were alleged to have been committed on January 22.

A conviction for intentional libel carries up to two years imprisonment while the law allows up 12 months in jail as a sentence for the charge of causing harm.

“These are matters where you can elect to be tried in the Magistrate’s Court or the Supreme Court...what is your election,” the chief magistrate asked the accused.

When asked for his plea to the respective offences, the 21-year-old replied “not guilty” to both counts.

It is claimed that he “unlawfully published defamatory pictures” of a woman whom he knew, intending to defame her.

He is further alleged to have “intentionally and unlawfully caused harm” to the female complainant.

In the picture which surfaced on the social media site, the complainant – whose identity is being withheld for her protection – is shown naked having sex with a man.

The image reportedly stemmed from videos that caused a stir around the country last week because the images, that went viral, showed a man performing sex acts with various women.

Last Friday, 28-year-old Constable Edmund Lewis Jr was charged with the production of child pornography in connection with one of the videos.

Yesterday, police prosecutor ASP Clifford Daxon was asked by the chief magistrate if he had an objection to Thompson being granted bail.

ASP Daxon said he had no objection.

The chief magistrate granted the officer $5,000 bail with the stipulation that he report to the Carmichael Road police station each Saturday on/before 6pm.

Thompson will stand trial before the chief magistrate on May 4.

He has retained lawyers Tamara Storr and Michael Kemp to defend him.