Government Gives $10m To Clearing Up Oil Spills Off Clifton 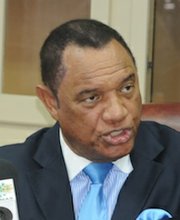 THE government has allocated $10m towards the removal of oil from waters off Clifton Pier, Prime Minister Perry Christie announced on Friday.

Mr Christie said the money has been spent “bringing in engineers” to “remediate” all of the “environmental degradation at Clifton Pier”. However, he did not confirm whether the government had identified a culprit in the matter, but said the government would not allow any “entity that is at fault to bring such damage to this country”.

Mr Christie’s comments referenced a situation last year that saw a significant amount of oil wash ashore on Adelaide Beach, prompting the Ministry of Environment to begin an investigation into the origin of the spill.

Around the same time, Stuart Cove’s officials had complained that “black crude oil” and fuel emanating from the Bahamas Electricity Corporation’s Clifton Pier Plant were preventing them from conducting their diving business.

Residents of Adelaide Beach had claimed that it was BEC’s Clifton Pier plant that was leaking the oil; however BEC Chairman Leslie Miller denied those allegations, saying that rather than “pointing fingers at BEC” people should investigate the other companies in the area.

Addressing the matter at a coral reef preservation conference at Paradise Island yesterday, Mr Christie said: “I advised my colleagues that the implication is a profound one when it comes to damages, not just to think about the environment and the rights for people to swim in waters that are conducive to good health. So the government has made a decision to spend up to $10m in bringing in engineers to remediate all of that environmental degradation at Clifton pier.

Mr Christie added: “We cannot allow, whether it’s BEC who is at fault or any other entity that is at fault, to bring such damage to this country.”

Last September, residents of Adelaide complained of waves of “smelly black oil” that had washed up on the beach, claiming that it might have been a result of ongoing oil leaks from BEC’s Clifton Pier plant. And Stuart Cove told Tribune Business that his diving business had suffered a “huge” impact after its boats and facilities were covered in oil, and added that the oil spill could leave the Bahamas with a “real black eye internationally.”

Albany’s marina chief Derek Roderick also told Tribune Business that it had been impacted “nine to 12 times” by oil pollution since it opened in October 2010.

Additionally, Sam Duncombe, Director of Rebirth Bahamas, and Save the Bays Director Fred Smith expressed their distaste with the situation.

Both Adelaide residents and Stuart Cove’s at the time suggested that BEC was the main culprit, however Mr Miller emphatically denied those claims.

Mr Miller claimed that if BEC was indeed the source, then the oil would have “run the opposite way” near Jaws Beach away from Adelaide. The Ministry of Transport and Aviation subsequently stated that the complaints and the oil leak problem were priorities for the Christie administration.

BEC executives met government officials and a team of biological engineers from the United States after it was discovered that fuel from the corporation’s Clifton Pier facility was leaking along the coastline.

Environment Minister Kenred Dorsett at the time said the fuel from BEC was mixed with oil from another source that began spilling into canals near Stuart Cove’s Aqua Adventures and Albany.

During a subsequent address in the House of Assembly, Mr Dorsett said an inspection of BEC’s plant revealed that not only was fuel being discharged from one of the facility’s outfalls, but it also revealed that BEC’s containment booms were not preventing all of the fuel from spreading.

Speaking on the issue on Friday as well, Mr Dorsett said the government would not “sit idly by and allow the continued degradation of the environment while waiting on an assessment to determine who to point the finger at”.

“The cabinet of the Bahamas has approved up to $10m being dedicated to the recommendations that were advanced by Caribbean coastal systems to address containment of oil going into the marine environment, to address extraction of oil that is in the ground and for the construction of a wall along the shoreline, 1,500 feet that will create a trench where the oil will then rest in and we will then be able to do further extractions,” he said.

“We’re going to advance all of those things hopefully simultaneously. Morgan Oil out of Grand Bahama has already been mobilised to come in and begin the extraction of oil in the ground. They will then take that product, recycle it, and then we will determine whether to sell it, reuse it or whatever. But the bottom line is they’ve been engaged already to recycle it. They have facilities in Grand Bahama where they can do just that. Other Bahamian companies, some out of Grand Bahama, some out of Nassau, have been involved in putting in more containment booms out there at Clifton and the engineering works are now underway for the construction of that trench and that wall, which hopefully will enable us to get more products out of the ground.

“It will be ongoing investigations as to the source. There was a team on the ground involving all of the oil companies together with the government yesterday on site were involving all of the stakeholders. The finger-pointing exercise is secondary in my mind’s eye to addressing the environmental degradation and advancing the remediation that needs to take place.”

This oil has been flowing out of BEC's outfalls for years now. If BEC were managed properly they would be able to do some simple calculations like... we put 10 gallon in the underground tank, we then use 8 gallons and then the tank is empty. I wonder were the other 2 gallons went? Well, perhaps the tank is leaking and the two gallons of oil/gas you see floating in the ocean across the street, belongs to you, you dumb @$$ fools. I think jail time is necessary to punish idiots!

Morgan Oil is a scam company. They came to Freeport all full of promises. Their owner David Morgan never got the money he needed to start the company properly. All Morgan did was buy a 30 year old single hull barge to transport the waste oil. Only problem is it is illegal to store or transport oil in a single hull barge. David Morgan disappeared last year and has not been seen since. The barge is full of waste oil and is sitting in Freeport Harbour just waiting for the next hurricane to come and split it wide open...

How is it a foreign company with no employees, no equipment, no expertise and no technicians got this contract?

Dorsett must be getting a huge kick back from Morgan!! Huge!!!!

Tribune. Do you guys ever do anything close to investigative work? Seriously? It would not take much to find out Morgan is a scam company......