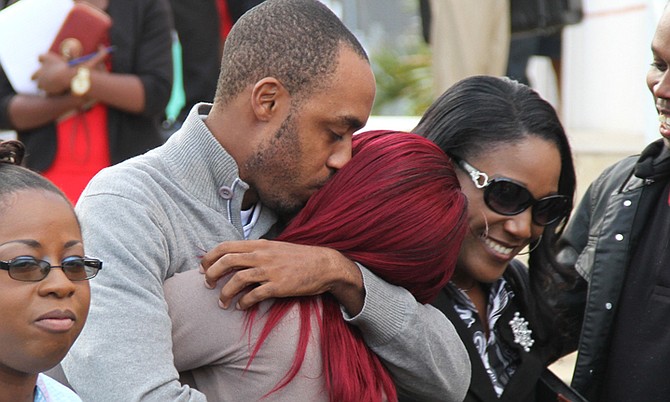 Emmanuel Lewis Jr is embraced after leaving court yesterday having been released on bail. He is accused of the production of child pornography.

A FORMER police officer facing trial in connection with the production of child pornography left the Magistrate’s Court complex yesterday flanked by relatives after being released on $5,000 bail.

Moments before Emmanuel Lewis Jr was embraced by several relatives outside the South Street complex, the 28-year-old was informed by Chief Magistrate Joyann Ferguson-Pratt that on March 2 he will learn when and before which magistrate he will stand trial.

In the interim, Lewis was ordered to report to the Wulff Road Police Station on the 15th of each month as a condition of his bond.

Yesterday’s bail decision came days after his re-arraignment due to an “inadvertent error” at his first court appearance concerning child pornography videos he allegedly produced between July 2014 and January 21, 2015.

The accused, at his initial arraignment, should have been given the option to be tried in either the Magistrate’s or Supreme Court and enter a plea to the charges.

Chief Magistrate Ferguson-Pratt, who took issue with the late arraignment last Friday, said the matter plagued her thoughts for the entire weekend. She decided to put Lewis on the order of attendance having determined that he had not been properly arraigned due to an “inadvertent error” that neither the Crown nor then-defence counsel had brought to the court’s attention.

Lewis has elected to be tried in Magistrate’s Court.

Given the change in circumstances, Lewis’ newly retained lawyer, Wayne Munroe, QC, previously argued that Lewis was a fit candidate for bail who should not be denied any more days away from his young child.

Earlier this week police prosecutor ASP Clifford Daxon did not “strenuously” object to bail, but did ask the court to reserve its decision until today, when the police are expected to have completed their full investigation into this matter.