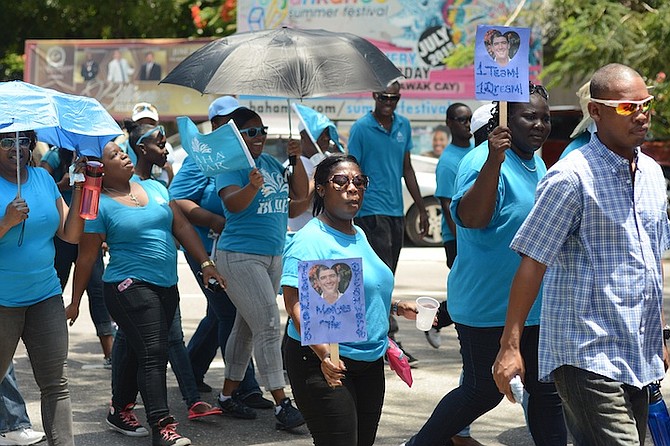 BAHA MAR WORKERS ON THE MARCH

HUNDREDS of Baha Mar employees yesterday took to the streets to proclaim their support for the man that gave them a chance in a dismal job market.

Clad in the brand's logo and blue colours, workers marched from Goodmans Bay to the mega-resort's parking lot chanting their affection for the $3.5bn project's developer Sarkis Izmirlian.

The demonstration follows reports that the government has stepped in to pay salaries for this month, citing concerns that workers were being used as “pawns” in the resort’s Chapter 11 bankruptcy claim.

"Mr Izmirlian has always been there for us," said a line worker, who spoke on the condition of anonymity. "He gave us a chance. There is a lot of problems going on now with the property but we here for him."

Workers chanted "we love you Sarkis" as they walked along West Bay Street.

Attorney General Allyson Maynard Gibson confirmed on Thursday that the government will pay the salaries of more than 2,000 Baha Mar workers this month as negotiations over the fate of the stalled $3.5bn project continue.

The decision was backed by a Supreme Court order that has adjourned Baha Mar's application for local judicial recognition of its Chapter 11 filing in a US bankruptcy court until Tuesday.

Mrs Maynard-Gibson said the decision to circumvent the Bahamian court system and file for Chapter 11 in a United States court without notice to major stakeholders opened the door for “serious and far-reaching implications” to the country’s sovereignty.

However, the Attorney General would not detail those implications or say whether the government was prepared to continue paying salaries if a resolution could not be met before the next pay period.

She also could not speak to the fate of Baha Mar’s Bahamian creditors, who are collectively owed an estimated $123m.

She said the Hotel Corporation of the Bahamas is ready to pay the full salaries of Baha Mar’s employees; however it is unclear if the government will also pay the salaries for the resort’s foreign workers.

Yesterday, demonstration spokesman Nick Lockhart said: "We are here today in support of Sarkis Izmirlian and the Baha Mar brand. We are not here to talk about the bankruptcy and all of that. We are here to show our support for the man who gave us a chance.

"We are not here to talk about the government and all of that. Our goal here today is to send the message that we the employees at Baha Mar are standing with Sarkis Izmirlian."

"We are very touched and appreciative of the support we are receiving from our employees," he said.

"It's at trying times like these when the true value of Baha Mar's culture shows itself. We are doing all we realistically can to to make sure Baha Mar is in a position to be completed and open as the premier international destination resort. We all understand that a successful Baha Mar is of vital economic importance to this community and to The Bahamas."