Nassau Village residents tell of their fear of crime 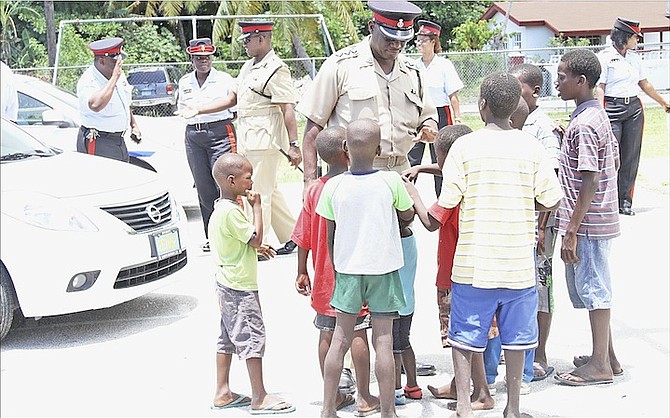 The Royal Bahamas Police Force conducted a walkabout in the Nassau Village area on Monday, handing out safety tip flyers and speaking to residents and business onwers about keeping the community safe. Photo: Tim Clarke/Tribune Staff

RESIDENTS of Nassau Village yesterday voiced their fears about the proliferation of crime in their area and worried that a promised increased police presence might not be enough to stop the problem.

The Tribune spoke to several residents during a police walkabout in the area.

Velma Elizabeth Adderley, a 75-year-old mother of nine, said that the efforts displayed by officers are commendable but would do very little to cut the scourge of crime.

Mrs Adderley said her close relationship with officers of the Royal Bahamas Police Force and the respect of youngsters in her community has allowed her an opportunity she said many of her neighbours don’t have – the chance to live without fear.

The police initiative came after 26-year-old Christopher Miller was shot dead around 4pm on Friday in Nassau Village as he was about to get into his vehicle after leaving a restaurant on Alexander Boulevard.

She said failures in the Bahamian family structure resulted in overarching issues that the government alone cannot address.

Joseph Dickerson, a 30-year-old resident of the area, said that despite being a member of the community since 1994, he no longer feels safe.

According to Mr Dickerson, the lack of protection and the tight-knit nature of the criminal element within the community now has him questioning the safety of his family on a day-to-day basis.

“This community is built of families,” the father-of-three said. “When I say families; I could break in my neighbour’s house today and my cousin could be over their living and they see that, I can get away with that. We need firm things in this community that can help the police try to make this community a better place.”

Friday’s murder along with two other homicides on Sunday pushed the country’s 2015 murder count to 80.

On Sunday, police promised to increase the number of officers on the streets to double down on crime.

Assistant Commissioner of Police Stephen Dean, who led the walkabout in the Nassau Village area, said it is a community that presents a lot of challenges for police.

“I can tell you over the past few weeks into today’s date, we have been mounting a number of operations in these areas and a number of areas in New Providence. We have made some successful arrests in these areas. Despite all of that, we will still have one or two incidents; but the key thing is that we are targeting some prolific offenders who tend to hideout in areas such as these, who believe that they can go under the radar.

On Sunday, police said they wanted to speak with 19-year-old Brandon Antonio Sterlin Cooper of Plantol Street, who they believe can help with their investigation into Friday’s murder.

This is always disturbing... every time there is a murder a million police shows up after the fact, they walk with the cameras do a sweet story then you don't see them in that area again. There is something called pro-active policing where you walk the area before someone dies. That is what restores faith in the police and the system and also remove the fear of crime. Other than that it plain old re-active policing. That doesn't remove the fear of crime or prevent incidents from happening..

Tough situation. In Jamacian they send the army into troubled neighbourhoods. This increased (and harsher presence) doesn't solve crime however. It can lead to either the residents being abused or made to feel like criminals (JA army patrol with guns UP and finger on the trigger), oor it could lead to criminals moving to other (otherwise peaceful) areas to commit crimes.

The real issue i believe is jobs - we all NEED to survive, some (there are about 11,000 unemployed youth) see the life of crime as their only tangable option