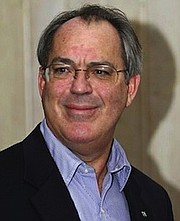 He added that Mr Mitchell’s conduct was not fitting behaviour for a Cabinet minister.

As he criticised recent remarks made by Mr Mitchell, the current minister of foreign affairs and immigration, Mr Symonette called for a cooling off period to allow for the successful resolution of the Baha Mar dispute.

Mr Symonette said he hoped that the talks in China led by Attorney General Allyson Maynard-Gibson were successful despite all the accusations thrown around at home – behaviour he described as counterproductive and discouraging to future investors.

He was referring to Mr Mitchell’s suggestion that Mr Izmirlian would face revocation of his immigration status had his scathing statement released last week about the government been made under the tenure of previous immigration ministers, such as Arthur Hanna or Loftus Roker.

“I don’t think that is the behaviour of a Cabinet minister and minister of foreign affairs,” Mr Symonette told The Tribune yesterday.

“The things is to let level heads prevail, to resolve this and get Baha Mar on the road. I don’t think that’s helping the situation at all, questioning whether the man (Mr Izmirlian) is sane. We need level heads making sure this is resolved as quickly as possible.”

During an Independence Day speech in Exuma, Mr Mitchell hit out at the developer – who has permanent residence in The Bahamas.

“You can’t come to The Bahamas and talk to our leaders anyway you like. You (got to) be crazy,” Mr Mitchell said on Friday.

He pointed to the stance taken by the late Sir Lynden Pindling towards accusations of political malfeasance levelled by American media, insisting that this set the stage for the country’s no-tolerance approach to disrespect.

“In that independence generation, if Carl Francis or Arthur Hanna or Loftus Roker who served as ministers of immigration were faced with the developer in The Bahamas of that day, he would not have lasted the next day within the borders of The Bahamas.”

When asked about this yesterday, Mr Symonette said: “Thank goodness we have progressed from those days. Thank God we no longer live under the days when a government can threaten residents with revocation of their status. This does not send a good message to other investors, and we need to be very careful that we’re not threatening people with revocation.

“It sends a bad message to potential investors.”

He added: “I hope the attorney general is successful in China, this is a complex issue and there have been a lot of accusations thrown around, and it’s going to take level heads to resolve this.”

When contacted by The Tribune yesterday, Mr Mitchell dismissed the criticism as political conjecture and pointed out that his speech was delivered ahead of the government’s two-day meetings in Beijing which began on Monday.

He added: “If they have a problem with that then cool breeze.”

Last week, Baha Mar released a critical statement about the government, accusing the Christie administration of “concocting a sideshow for its own purposes”. The statement came after the Ministry of Finance blamed the resort for being slow to provide pertinent information, which led to the government’s delay in paying Baha Mar employees last week. Baha Mar shot back at the assertion and called the delay in workers’ salaries “unconscionable and disappointing”.

Hours later, Prime Minister Perry Christie said he had “grave concern” for the state of Mr Izmirlian’s mind due to the nature of the resort’s press release.

The war of words is part of an ongoing saga that unfolded after developers of the $3.5bn mega resort filed for Chapter 11 bankruptcy in the US on June 29, a move that reportedly blindsided the government.

Earlier this month at a church service in Florida, Mr Mitchell suggested that the developer’s bankruptcy filing was an attempt “to effect an act of unfairness on the Bahamian people while trying to fool us that they were looking out for our best interests”.

Well Brent is very much correct!

Oh really Brent, now you can't be that serious when it was not a minister but the nation's PM Papa Hubert, who had this to say about a foreigner businessman over his criticisms of the road works project on Prince Charles Drive. Here's Papa's statement:
"It is most regrettable that such a person has been allowed to have that type of business in the country. He is NOT a good person for the Bahamas."
Brent, is it any damn wonder, despite the many missteps by this PLP Cabinet, the red shirts have been unsuccessful at gaining any traction amongst the electorate, they can take with them into the 2017 General.
Talk about political opportunities hitting y'all reds on head, going to waste.
Brent what about the bad ways Papa treated business people in Freeport? I guess you never read some things Papa had say about some Freeporter's?
Good Lord Almighty, Papa said worst things about you to US Embassy officials, than Minister Freddy has said about Izmirlian - and you is a son da Bahamaland soil.

Maybe you and Tal can just start commenting together under birdieRussell or Talstrachan so that way I can scroll down the comments quicker.

See also the Masters of the quieting of titles and loss of poor people's property, the folks who "developed" the flooding gardens in Nassau, among others. Or did you conveniently forget as always? We don't. But referring to what is actually germane to the article, Mr. Symonette is quite correct. The Minister's utterances are unbecoming of a person in his position.

Birdiestrachan and TalRussell , this is what continues to keep our nation back; people who see things solely through biased eyes. The issue here is Fred Mitchell's response as foreign minister . In most 'first world' countries, he would be given the choice to resign or be fired for his comments.You are not unlike African Americans, making excuses for all the negativity in their communities.

Comrade I simply restated the exact words Papa Hubert, uttered toward another foreigner, also unsatisfied with government. I got's whole stack more of things he said people, including to and about his own damn MP's, and yes his own red cabinet ministers too. Some other business people and government workers too. I hope you are not trying reinvent the likes of a man known to take delight when belittling all comers. I've heard stories where grown men's members his red party, actually made to cry. Haven't you heard them too?

Yinna are stuck in "yesterday" mode. I understand that you are to old to think about the "tomorrow" people, but your dead shit is OLD! I am thinking what is best for OUR country, and Fred's remarks most certainly are negative. OK, Got it?

Look, if you want to be all, yesterday, go hang out with B.B.B, yinna can get all itchy/scratchy together and recount your story's. The rest of us are dealing with TODAY. go point your old ass fingers at what ever you want, because yesterday is done.

Also, I mean, you really stand by the retarded remarks Fweddie made?

Comrade if you're asking me if I would have said it more softly, the answer is hell no - cuz of who it was said to.

You can lead a horse to water, but you can't me him (or her) think. Pity.

Fred Mitchell first stint as chief diplomat was brilliant. He was able to secure private meetings with Condoleezza Rice and he did brilliant work on behalf of the Bahamas and the region as a whole. His second time around is as bad as his first time was good.He fight with the Haitians and Cubans in Florida(even if it justifiable our chief diplomat should always be above the fray). He went head to head with the late Dr. Myles Munroe and now this. Get it together Fred or let the Prime Minister know that you no longer have the restraint necessary when it comes to diplomacy.

Comrade if you're asking me if I would have said it more softly, the answer is hell no.

Cut off your nose to save face. Stupid is as stupid does. This is not the 1900's any longer, the world is a much smaller place, No sane diplomat whose country lives and die's by Foreign Direct Investment should be so 1) insecure, 2) bite the hand that feeds him, 3) plain un-diplomatic. Take all the FOREIGN money out of this country and what will you have? Think hard on that.........

Baha Mar is what was to be, not what it will, or can be.
Comrade we would not be turning over our private and crown lands, beaches and private islands to foreigners. I envision a future when finally owning their own homes will become reserved and be more affordable citizens.
If you think for a second Baha Mar will continue on as Izmirlian's Baha Mar - wake up and smell the strong funeral scent in da air of Baha Mar roses.

What a fart..err mean farce. Fred trying to be tough, when we all know he is a power puff!

How can anyone blame Sarkis Izmirlian for his comments? This man and his family have been nothing but good to The Bahamas and have invested almost a billion dollars in Bahamar. The government has no business sticking it's nose into the private affairs of Bahamar or any other privately held buisness. I worked for Mr. Izmirlian for over five years and know him only to be an honest and forthright business man. From day one he only expressed his desire to build something that would provide jobs for the Bahamian people whom he shared a genuine affection. He built a home on New Providence Island and has raised his three children in The Bahamas. What else does the government want from this man or any other person who is willing to bring their fortune and interest to The Bahamas? If the government will keep it's nose out of Mr. Izmirlians business, I would be willing to wager that he will resolve the issues to the benefit of the citizens of The Bahamas and will provide jobs for thousands of folks for Bahamian generations to come.