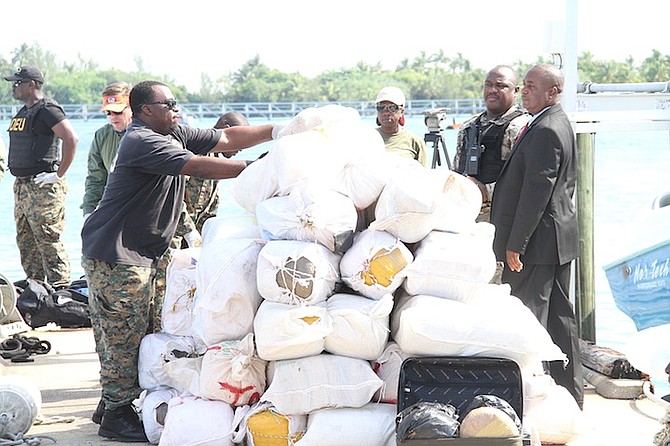 The seized drugs are offloaded in Nassau this morning. Photo: Tim Clarke/Tribune staff

FIVE Bahamians and a Jamaican are in police custody following a major drugs bust in waters off Andros in the early hours of today.

Shortly after 12.30am, a team of officers from the Drug Enforcement Unit assisted by officers from the Police Marine Support Unit acting on intelligence, intercepted a speedboat in waters off Kemps Bay, Andros, with five people onboard.

A search of the vessel revealed a large quantity of marijuana.

The suspects - all male - were taken into custody for questioning and the drugs offloaded in Nassau this morning. Police said the bust was the result of "a combination of teamwork and excellent textbook police work" which has dealt a major blow to the drug traffickers in the Bahamas.

Full story in The Tribune today.

The American drones hard at work, why don't they tell us about the immigrant boats from Haiti?

Because our Christie-led PLP government (and the likes of Fred Mitchell in particular) welcome illegal Haitians with open arms all the while feigning concern about our illegal immigrant problems. Uncle Sam decided years ago that if we want illegal Haitians, well then we can have them! From a cost perspective, it's much easier for Uncle Sam to fight its own illegal Haitian problem 12 miles off of its shores rather than throughout the many islands of the Bahamas. Uncle Sam now accepts that the Bahamian people should be left to their own ruination if they are foolish enough to continue electing the likes of Perry Christie, Fred Mitchell and the pudgy one with the short stubby grubby dirty sticky fingers!

I ate times question the mental state of some of these bloggers. This administration has done a lot to stop the flow of illegal migration.

And which country do you live in?