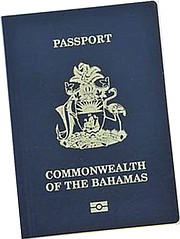 LAWYER Fred Smith, QC, yesterday endorsed the Passport Office’s decision to impose a $200 fee to those seeking to obtain a Bahamian passport within 48 hours on an emergency basis.

Mr Smith, one of the Christie administration’s most vocal critics on its immigration policies, said the two-day service fee is “extremely beneficial to the public” and is “consistent with first-world practices” in other developed nations such as the United States.

Mr Smith also criticised Democratic National Alliance (DNA) Leader Branville McCartney for previously suggesting that the government was “cashing in” on its inefficiency by implementing the fee. Mr Smith also dismissed the suggestion that the Passport Office currently suffers from “monumental inefficiencies”.

“Quite the contrary,” Mr Smith said yesterday. “The Passport Office has progressively become more and more efficient over the years, and if the public harkens to the dark ages when it took almost forever to get a passport, they will realise that the present situation at the Passport Office is 1,000 times better than what it used to be.

“The promises of increasing technology by the $18m expenditure and the promised reductions in time, are hopefully going to improve it even further. There is a cost to governance, and as long as the productivity of the government department corresponds to the increase in fees that are sought for the service, the public should not complain.

“In fact, anything that any government department can do to increase efficiency and productivity for payment of a reasonable fee, then it should be applauded. What we do not want is paying more and getting less service. But what is being promised is a more efficient service for a reasonable fee. And the $200 is comparable to express passport office services provided in other jurisdictions. It is not unreasonable, it is not extreme, or excessive,” Mr Smith added.

The Ministry of Foreign Affairs announced the new fee nearly two weeks ago, which applied to applications received after July 9. However, those who have applied before July 1 and were given a certain date for the production of passports will not have to pay the new fee if the passport is needed at short notice.

The statement from the ministry also revealed that the Passport Office was grappling with a backlog of 6,500 applications and is struggling to meet the extended deadline of 12 weeks from the date of application.

Yesterday, the government said the Ministry of Finance had approved overtime work at the Passport Office for the month of August, which would hopefully help to reduce the backlog.

The regular fee for a passport renewal is $50.

Last week, Mr McCartney blasted the government for “cashing in” on its own inefficiencies by implementing the new fee, terming the move to tax the relevant applicants as a “third-world mentality”.

Yesterday, however, Mr Smith said he was “disappointed” in Mr McCartney’s remarks.

“The two days is an efficient service and it’s very necessary,” Mr Smith said. “Also bear in mind that we are transforming from handwritten passports to electronic passports and to digitally stamped passports, and plugging into an entire digital system.

“You have a situation where, in defence of the Post Office, they’re dealing with issues of forgery and corruption, they’re dealing with maintaining the old system of handwritten passports. They have implemented a whole e-passport and digital stamp system, and now they’re going to implement a further efficiency improvement with (Canadian Bank Note Company Ltd). So in many jurisdictions, the public would be happy to pay for an efficient service.

On Monday, Mr Mitchell confirmed plans to increase the cost to obtain a new Bahamian passport, pending approval from the Ministry of Finance.

He also said the government has already set in motion plans to overhaul technology at the department at a price tag of $18m. Canadian Bank Note Company Ltd has been identified as the new vendor for the equipment, Mr Mitchell said.

Officials also announced that they have taken in $24,000 in emergency passport fees since announcing the new $200 charge for a 48-hour turnaround.

A $200 fee for expedited service is reasonable and practiced around the world. A 12 week delay in receiving a passport is not reasonable at all.

No excuse for the gross inefficiency -- the $200 fee, in this case, is having to pay an extorted premium for government efficiency. If they can produce a passport in 48 hours, then why the 12 week wait?

Yeap...$200 is pretty normal in almost every country that provides an expedited service. But as you say, the extended wait time for normal passports is TOTALLY unacceptable...that's where the issue lies.

Bahamians need to start planning and do registrations/renewals and licensing ON TIME for a change. Probably an extension of the bill avoidance habit, maybe road traffic should charge a premium for late vehicle registrations and licensing.

Procrastination, I agree, is the real reason for the backlog. Prior to the mandatory deadline to replace obsolete passports and the immigration regulations...I thought the process was painless. I received my passport a week earlier than I was quoted.

Comrades there has always been two passport fees - the fee you share with the public treasury on top of da table - then there's the grease the wheel fee that you can only hope and "pay" - does speed da process. If not so, kindly share Tribune readers, da secret how you gots yours processed? Not sure if it's a little more or little less than Motor Vehicle processing fee? Being all but ignored while waiting at back line, can be trying on one's patience. One day a saw well-dressed man's at back line waving an old Milo Butler twenty dollar Bill and shouting....over here, please.....I'm over here.

Of course Mr. Smith would support any impediment to Bahamians getting passports. You know the people he wants to get them - and they is get theirs for free.

You keep mentioning the "destitute" as those entitled to expedited service. Just a thought, but if they are destitute, they shouldn't need a passport, as they can't afford to go anywhere, right?

You forgot that a passport is the main one of two government issued photo id's required at local banks for check cashing, when an individual does not have an account at the bank on which the cheque is drawn.

Never paid a bribe, never paid anything but the lawfully required fees, never had any issue. People who do so are the problem. Sure, I see people skipping the line, just like at Wendies, Walking directly to their Peep in the back. They are the destroyers, the unlawful, the Church attending pious. I, the prompt bill paying, owe Government nothing, lawful citizen stand above, and pay their salaries. Too bad there are so few of us left. Honorable people, courteous, mindful, used to be in the majority in the Bahamas.