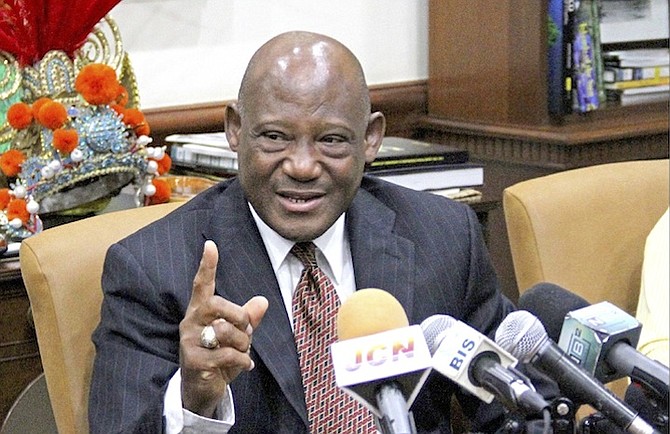 THE Christie Administration failed to secure a return on its $11m investment in May’s highly touted Bahamas Junkanoo Carnival, according to the official statistics of the event released by the Bahamas National Festival Commission yesterday.

For its over-budgeted $11.3m investment in the festivities, the government reaped $8.3m in combined direct and tax revenues, with the latter providing $6.7m of that sum.

The direct revenue, which totalled $1.6m, largely came from ticket sales and cash sponsorships, according to BNFC chairman Paul Major.

Mr Major also confirmed that efforts were still being made to secure payments for some vendors who reportedly lost money during the event – a sum estimated to cost the government about $40,000.

Nonetheless, the commission concluded that the total direct economic activity of the events was about $19m, including $5.5m in Grand Bahama.

That total includes the government’s local expenditure for the event.

The commission said that tourist-related economic activity, including hotel sales, stopover tourist expenditure and cruise tax expenditure, generated about $4.6m. $2.8m of that was generated in Grand Bahama - more than the $1.7 made in New Providence.

The festival attracted about 115,000 spectators or participants, employed 7,208 people and benefited 880 small and medium enterprises, the long-awaited report concludes.

The total expenditure for the event was $12,947,650, more than the government’s budgeted $9m. Of this total, the government spent about $11.3m, with the rest covered by sponsorships.

The commission blamed the cost overruns on a number of factors, including having to host the initially unplanned Grand Bahama kickoff event and providing funding for additional local marketing and promotional activities.

Mr Major said a more formal study of the events’ impact on the country’s Gross Domestic Product (GDP) is being prepared by Deloitte & Touche. Their report will be released in a “couple weeks or months”.

That study, he said, will examine the multiplier effect of the events’ economic activity.

Regarding that, Mr Major stood by his prior statement that the festival’s GDP impact will be more than $50m.

“Whatever is spent directly, there’s some multiplier effect that translates into a GDP impact,” he said. “It is somewhere between three and seven per cent. What is spent by foreign input is multiplied by as much as seven times. For things that are local input, it could be anywhere from one to four. And that’s all about money being re-spent in the economy to impact the GDP.”

The BNFC defended the event from criticism that it was not as much of an economic success as hyped.

Mr Major said that the festival had a “positive” impact on the country. “Our main goals for the festival were to create an economic stimulus within the cultural sector; expand our tourist product offering; develop a framework for indigenous cultural production; create a platform that exposed Bahamian music to the world and revolutionised the entertainment industry; promote Bahamian entrepreneurship; and foster multi-sector economic impacts. Bahamas Junkanoo Carnival 2015 successfully accomplished those goals,” he said.

The commission’s members also stressed that government’s return on investments is not as important as ensuring that events like Carnival stimulates the economy directly.

“There is no (Profit and Loss Statement) for a carnival but the government generates various taxes and VAT and it gets people working, which stimulates the economy, and all those consumers are buying more and producing, which means more tax and economic base for the country,” Mr Major said.

“It’s more about than ‘next year the loss gon’ be $2m instead of $1m’. Ain’t (no government hosting Carnival in the world) makes money off carnival. We don’t count it like that. It ain’t like when you operating a business and every year you have to produce a P&L (profit and loss statement) to say whether you make or lose money because in this case there are a lot of other variables that don’t show up in the income statement.”

The BNFC members said it would be wrong to characterise the inaugural Carnival events as unsuccessful because of the revenue reaped this year, pointing to its cultural impact and room for growth as reasons to be highly optimistic of the boon the event will be to the country in the future.

However, regarding the event’s shortfall, the BNCF’s press statement said: “The festival generated approximately $1.6 million in direct revenues, a shortfall of $5.9 million based on projected revenue. This significant shortfall is accounted for primarily by the lack of international sponsorship revenue, which had been projected at $5 million, and ticket sales, which did not materialise as the headliner was not announced in time and many tickets were bundled together and given away for promotional purposes and provided complimentary to partners such as the Junkanoos.”

Mr Major said the government’s net cost of hosting the festival in the future will be less than this year’s tally, adding that the sponsorship it will attract to host the event from local and international sources will increase substantially, therefore reducing the amount the government will be expected to pay.

As the commission works to prepare next year’s event, a final determination of its cost in general and to the government has not yet been determined, he said.

The 2016 event is slated for April 15-16 for the Grand Bahama kickoff and May 5-7 for the finale weekend on New Providence.

So Carnival was a flop and a waste of money. If the Government wants to improve the GDP the government needs to focus their attention on creating export industries. Wow!! No foresight!!

Will Durant said it best, "A nation is born stoic and dies epicurean"

Does this mean they only made 600,000? Because BTC gave a "cash sponsorship" of 1million.

Ahem- business acumen? What business acumen? has this man ever been in charge of something that actually made money? Please let me know because every time I hear his name i immediately think financial disaster and spin doctoring. he has the incredible ability to speak out of two orifices at the very same time- incredible.

11 million dollar price tag, minus private sector expenses (money given to politicians through non related businesses) equals, we got screwed again by the government

Wow, got a second hand account of "the horse" himself reporting how he was shaken down by a senior carnival official. I expected the behavior from the man who was led out of CIBC in handcuffs, but not from this person....everybody seems to have been shaking down vendors to get their cut...the public meanwhile is wondering if it's so obvious to us that this isn't adding up, why are the people at the top approving the budget to the commission...well, the answer is obvious.

Meanwhile two people in court for stealing max 30,000 while other slid away with hundreds of thousands. Blackened lambs to the slaughter.

Lightbulb. They're operating like the mafia. any money making in this town, we have to get a piece of it, Carnival, BAMSI, VAT, Renew Bahamas, LOI, BOB, PHA, BEC, UR, BTC "2%". We've been wondering why money is continually thrown at poorly planned projects destined to fail. but it's the public who's been blindsided, our understanding of the goal has never been the goal...the goal has always been and continues to be, move as much money as possible before 2017

The incompetence of Government officials and workers never ceases to amaze me. They have no concept of how to run ANY business entity. Just look at the national debt,much of that money squandered on useless schemes..

OMG I have come to a sad realization. We can only call them incompetent if competence was their goal. After a conversation I had yesterday I've realized that they are very competent at exactly what they want to do, "move as much money out of the treasury before 2017 as they can". That's it. Everything else is fluff. They do not care about anything other than how much their cut from carnival is. Ask a vendor to submit a contract for $10 dollars and have the vendor pay them $4 when they get their cheque. That's embezzlement.

what's happened to the other buildings at BAMSI? The ones that didn't burn? They should be completed and the keys handed over by now. Why hasn't that happened, because the HIGH powers already got their bribe/extortion money, they don't care if the buildings ever get finished. In fact, if they don't finish they can extort more through inflated rent contracts

Anybody who came to The Bahamas the week before, during, and the week after Carnival will be included in the so called revenue generated by Carnival.

One way or another they will get this to $50 million.

So now we know the Carnival over-ran projected costs and actually made an operating loss. When are they going to tell us exactly where the money went???.....don't hold your breathe on this one. Most especially we want to know how much Major was paid!!!