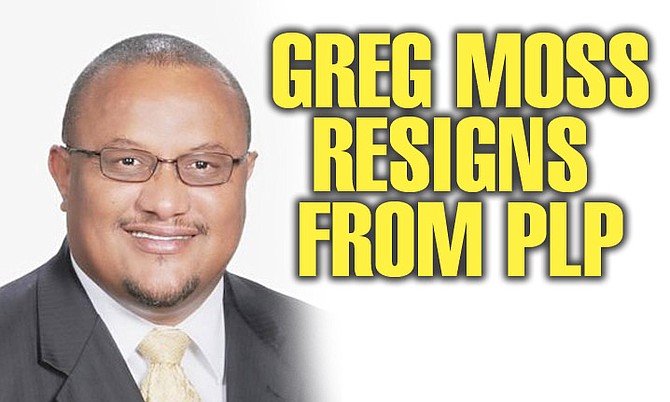 MARCO City MP Greg Moss has announced that he will immediately resign from the Progressive Liberal Party (PLP), citing poor leadership as the reason for his decision.

His surprise announcement concluded his budget communication in the House of Assembly Monday evening after he chastised the Christie administration for failing to live up to the principles and ideals upon which the party was built.

“By the time I come back to this House Mr Speaker, you are going to be required to exercise your discretion under Rule 23 Sub 3 (of parliamentary rules) regarding the seating of members in this House because tonight I'm going to resign as a member of the PLP.

“I cannot continue with this party in the manner with which it is operating. That resignation (letter) will be with you tomorrow and to the leader of our party (and) to the chairman of the party. I strongly encourage the party to look not at window dressing but at changes.

“We clearly have a problem with leadership…both at the executive level and at a party level. I'll follow my conscience on this Mr Speaker and I will ask to be reseated.”

For more on this story, see Tuesday’s Tribune.

Now you just need perry and the rest to resign and free this country from their tyranny.

While Greg Moss may be still angered by the NHI situation , he is still apart of the party that believed in Bahamians. Where there are distance between the long standing bearers of the PLP and the new ones, more can be done with regards to bridging the gaps. The implications will have damaging effect with regards to whom the party is seeking to attract in its 2017 fold . This can have similar effect as Branville McCartney had on the FNM party leading up to the 2012 election. While the DNA didn't materialized to a seat in Parliament , it sure spoil the opportunities for quite a few. Just remember in recent year the party would have lost Rigby as chairman , there is still the challenge with Wells and Rollins. Leslie in no uncertain term are expressing some fatigue. There seem to be a need for some unity. Will the PLP win the next general election ? Answer is yes , but the margins will be very close. My predictions is 22 to 17 , plus 1 DNA

This government will never win in this nation again. . .THEY ONLY WON BY DEFAULT LAST TIME. . . THEY HAVE SHOWN THAT THEY ARE NOTHING BUT CROOKS AND LYERS. . .LED BY A DELUSIONAL JELLY BACKED MAN. . .EVEN DR MINNIS WITH ALL HIS FAULTS WILL TAKE THEM TO THE CLEANERS. . .NOT BECAUSE THE PEOPLE LIKE DM. . . BUT RATHER BECAUSE THEY HATE THE PLP SOOOOOOOOOOO MUCH!! BESIDES PC AND FM. . .THE REST OF YALL AIN'T GOT A PRAYER!!

At least one of them is seeing sense. Now the rest of the PLP should be impeached for corruption, lack of transparency, incompetence and poor governance. The Bahamas cannot survive until 2017 with this corrupt and ineffective government.

A smart move by Greg because every sitting MP today who runs as a PLP candidate in the next general election is destined to have their political career ended forever. This is certainly no time for any politician in the PLP who values his or her future in politics to be tied to the hip of an incompetent self-destructing PM like Christie who is finally on the verge of being made extinct by the Bahamian people.

this is a society that values people who follow people. people who make their own path should be given some respect, instead they are treated like rabble rousers.

the young are disenchanted because people are hanging on till they are 80 and their time will pass before they can make any contribution.

senile people do not realise, there is a time to go, look at the FIFA guy, could not give up that sweetness.

it takes self -respect to retire in glory, and many political leader lack that.

Good move Mr. Moss!! I applaud you. Time to get off that sinking ship.

The only persons praising Moss are FNM's . and any party who picks up Greg Moss, will be making a mistake. He was given a chance as a minister of NIB. he messed that up big time. Moss is a troubled man. and he is not a good representative . of Marco City. I suppose Rollins will resign also. I am not sure about wells.

Birdie, by your logic anybody who lips ain close to Perry and Brave them bungie, read Birdie and Ortland, have no place in your wonderful Gold Digger organization..Do you live in Marco City that you could speak to Mr. Moss quality of representation? You seem to have all the answers that Perry them can't find so why you ain runnin for something instead of just runnin ya mout as usual

I am appreciative of the fact that the Tribune allows me to post on this site. and because of the high respect that I have for myself. I am very careful of what I say. Moss has some kind of gripe, He is like a spoiled child who throws a fit when he can not get his way. all that is left for him to do is throw himself on the floor and kick his feet up and down. I trust that now that he has resigned he will find some peace. and I repeat he is not a good representative of Marco City. and he will be a thorn in the PLP in the house until his term comes to an end. that is all that is left for him now.. Moss is no hero. and he stands for nothing ZERO.,

By your twisted logic, anybody that is not a PLP stands for nothing and has nothing to offer. This is impossible but when you swallow the rhetoric hook line and sinker nothing less can be expected. The Nazi's thought Hitler was a god, see where that got them?

What I said about Moss is still true.

No it is what YOU believe. Do you live in Marco City? The more we hear from you the more you come across as a minion/crony/paid political goon. You most certainly are on the PLP gravy train.

Birdiestrachan never saw a plp she didn't love. Nothing more than a boot licker. Maybe one day she will take her head out of the ass of perry them and see them for who they are

Fact is we are a strongly partisan country, divided right down the middle when it comes to our political affiliations. From observation, birdiestrachan is strongly (and I may be wrong) PLP, while the majority on the site are strongly FNM. Fact is, most would blindly support their party of choice despite of their faults. Am I wrong? FNMs will still vote FNM and PLPs will still vote PLP. This won't change any time soon.

So we're not a country dominated by a two-party system? Last time I checked, only two parties have successfully led an Independent Bahamas - PLP & FNM. This suggests that we are a strongly partisan nation. Am I wrong on that? And this will not change any time soon. PLPs will continue to vote PLP and FNMs will continue to vote FNM.

Actually, I have voted for both.

As I'm sure many have done in the past, this is why the last few elections cycles have seen one-term governments, PLP-2002, FNM-2007, and PLP again in 2012. Diehards will continue to vote for their party, while the few willing to break with tradition will either vote for the other party, vote for a third party or independent, or not vote at all.

I GUESS GM POUTED JUST LIKE PC WAS POUTING ABOUT THE POLICE AND DEFENCE FORCES DID NOT PLAY FAIR WITH HIM. . .AND CAUSE HIM CAN'T GET THE CRIME DOWN? CHILD THE WHOLE WORLD LOOKED AT THAT PITYFUL EXCUSE FOR A PM CRY HIS TAIL OFF.. .AS HE LEAD THE PLP DOWN THE DRAIN!!

YOU AND THE REST OF THE PLP DO NOT SEE THAT WE DON'T CARE IF MOSS WAS A GOOD PLP, MAD AS HELL, KISS BRADLY ROBERTS HIP, TEACHING DR MINNIS TO TALK GOOD OR BELIEVE HI WHEN HE SAYS HE WILL NOT BE COMING BACK FOR THE NEXT ELECTION? WE HATE THE STRUGGLIE PLP GOVERNMENT AND WANT THAT CRIMINAL MOB GONE!!

IT EEN GOT NUTTIN TO DO BOUT GREG MOSS BOO. . .ITS THAT TYPE OF STRUGGLIE THINKING IN THE PLP. . .JUST LIKE WE SEE IN YOU. . .WON'T SPEAK THE TRUTH!! AND OH CAN YALL TIEF!!

Poor leadership that he signed up to follow .............. or did he think he had influence to overturn the entrenched Pingdomite PLP establishment??????????

Maybe he hoped he could make a difference.....

Hopefully Hon. Greg Moss's departure from the PLP marks the beginning of a domino effect leading to a core of independents forming a coalition focused on exposing and combatting corruption.

The only solution to saving our country is firstly get rid of the PLP and FNM to even begin unraveling systemic corruption in ALL the highest of places that has rendered our country nearly totally dysfunctional.