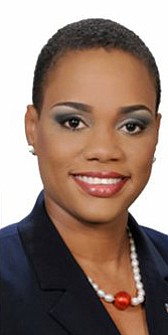 FORMER Senator Heather Hunt has emerged as the front-runner to represent the FNM in the Yamacraw constituency, according to party insiders.

The Tribune understands the 31-year-old mother-of-three has been tapped by the party’s leadership to vie for the seat in the next general election.

When contacted by The Tribune yesterday, Mrs Hunt admitted that she had not completely reconciled the personal decision to return to frontline politics and declined to comment on whether she was in talks over a possible nomination.

However, she said she could not “run from the facts”.

“(Yamacraw) that’s where I’ve established relationships in the past from a very young age, and served on their executive (committee), but when the time is right and if it is meant to be that I represent the community in which I have a strong connection to, we will see.”

She added: “Now in what capacity I remain it’s a matter for my party, my leader, and for me after personal reflection as well.”

Less than 300 votes separated the former FNM candidate for Marathon from victor PLP MP Jerome Fitzgerald during the 2012 general election.

Mrs Hunt pointed out that she set out on the campaign trail in 2012 as a young mother with a three-month-old baby.

“While that may not have been the best fit for political life, I can’t sit down and cry about spilt milk now. What I’m contending with is, three years later, am I going to do the same thing now that I did in 2012?

“The decision I made in 2012,” she said, “with the experience of having served for two and a half years in the Senate, there are different things to consider.”

In Yamacraw, incumbent PLP MP Melanie Griffin secured another consecutive win for her party with a little over 400 votes ahead of FNM candidate Dion Foulkes.

The eastern New Providence constituency has long been considered a PLP stronghold as Mrs Griffin has held the seat since 2002.

Yesterday, Mrs Hunt elaborated on her connections with the area.

“I was in Torchbearers for years, I was on the executive (committee) of the Yamacraw constituency as a youth officer. I’ve campaigned not only there but in numerous party campaigns. I’ve just been around politics a very long time.

“My first campaign, I was very young but I was around when (Long Island MP) Loretta Butler-Turner ran for the first time in St Margaret in 2002. We need more women.”

“The public service was really inculcated in me from childhood. Girls in this country need more women that they can patent their life, the more girls and young women that we can attract into making the real sacrifice to be involved in public life.”

It has been rumoured that Mrs Hunt was not on good terms with the party’s leader since her resignation from the Senate earlier this year. The resignation came amid accusations from party insiders that FNM Leader Dr Hubert Minnis was attempting to rid the party of anyone who did not support him in the last FNM convention. Mrs Hunt has said that she resigned at the request of Dr Minnis.

However, a source told The Tribune yesterday that the pair had met recently to discuss Mrs Hunt’s candidacy.

“I was honoured to be asked to run in the last election, at a young age and probably not at a time that it would have been expected of me to do so because of the stage of my career and the stage of my family life. With my background in mind and having served two years in the Senate, I really need to pay attention to those things.”

Sorry, no FNM or PLP this election! All yinna wanna be politicians who only want to run to suck the Bahamas dry can go back to the pits of hell from when yinna cometh.

Then who? Cause Bran is for all intents and purposes is FNM, only calls himself something else.

ANYBODY OR ANYTHING other than PLP and FNM would be an automatic improvement!

The candidates MUST have a connection to the constituencies that they seek to represent .......... if she is deeply rooted and connected to Yamacraw, then she is worthy of consideration.

Caribguy, it doesn't matter where Bran's political career started or which party he was once affiliated with . The hard fact is that he has moved beyond the stale philosophy of the FNM. That in itself makes him a viable candidate in my book. Both the FNM and PLP need a rude awakening. The Bahamian people need to show these two parties that they do not necessarily have the God given right to run this country. The Bahamian people need to show these clowns that they are tired of playing political ping pong, swinging from one party to the next. I could give a dam about Bran's readiness for political office. The idea is to vote the other two major parties out as a form of protest. Besides, the DNA could not possibly be as bad as the other two dinosaur parties, not even on a bad day.
The Bahamas needs a fresh start. We need new ideas that will push us forward. The PLP and FNM already owe too many people favors. This is what makes both party corrupt:They will always feel obligated to throw favors at their sponsors and special interest groups etc. Both parties have been given a chance. Both parties have failed miserably! Time to move on Bahamas!

Bran and the DNA are certainly not the answer. Vote for the candidate running as an independent in the next general election if he or she is honest, intelligent, charismatic and has real fire in their belly to effect changes for the betterment and uplifting of all Bahamians. Otherwise, don't waste your time voting for more of the same or possibly even worse. It's really that simple!

True. I forgot about the independent candidate. But other countries have shown that coalition governments hardly get anything done. Soon everyone wants to be a leader.

We're much better off taking our chances in voting for good independent candidates who we believe will be responsive and accountable to the Bahamian people. These independent candidates should have no ties to the FNM, PLP and DNA, and must not accept campaign funding from the 'illegal' web shops, i.e. sources like Flowers and Bastian. Once elected these new independents will hopefully see the need to come together to establish 2 or 3 entirely new political organizations with no remnants from the PLP, FNM and DNA. The first order of business for our next government should be campaign finance reform aimed at preventing the corruption of our political system by the proceeds of crime from the likes of Flowers and Bastian.