Smith Vows To Stay With Plp 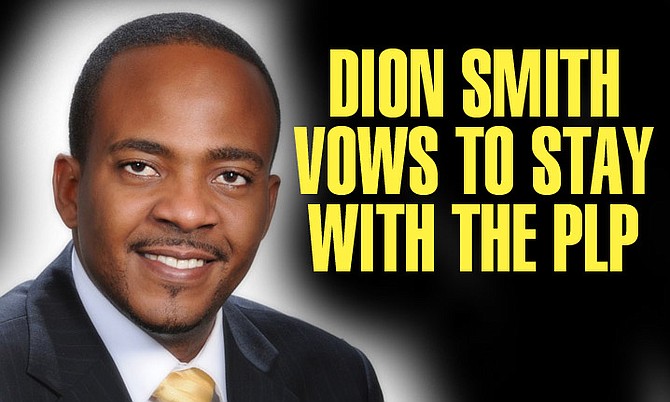 In his support of the 2015/2016 budget, Mr Smith told parliamentarians that he was not “jumping ship” and instead would continue to advocate for change from within the organisation for the continued success of the Christie-led administration.

He proclaimed that while he was often referred to as a “rebel for expressing new generation views,” he was focused on upholding the core values and principles of his party.

His comments came three days after his former PLP colleague, Marco City MP Greg Moss, announced his resignation from the party as he denounced the PLP party and its leadership. Since then, there has been mounting speculation that other PLP newcomers are disgruntled with the old guard and have similar plans to quit the governing party.

“I’m not jumping ship,” Mr Smith told the House of Assembly. “I’m going to keep my government’s feet to the fire to continue to do what is right so that we can build a stronger Bahamas together. That is what I was sent to this House for, and that is what I will continue to do.

“I signed on in the last election with the great Progressive Liberal Party as a new generation candidate. I, along with my youthful colleagues, set out to ensure that our party remains in touch with the issues and challenges facing the new Bahamas.

“Not all that enter the race will finish. Some will become wary and some will fall by the wayside but I, Dion D Smith, I have my eyes on the prize and I remain focused,” he added.

In the lead up to the last general election, Prime Minister Perry Christie highlighted several fresh faces – including Mr Smith and Mr Moss – as part of the party’s “new generation of leaders.”

Included in that group are outspoken Ft Charlotte MP Dr Andre Rollins, who was the subject of a disciplinary investigation for his scathing critiques of the prime minister, and Bamboo Town MP Renward Wells who has also lashed out at his party since he was elected to office.

On Monday night, as he wrapped up his contribution to the budget debate, Mr Moss said he no longer believed his values for the country are shared by the party’s leadership.

In a later interview with The Tribune, he said the party had long abandoned the intended principles of former Prime Minister Sir Lynden Pindling. Mr Moss said “the straw that broke the camel’s back” was the 2015/2016 budget now being debated in the House of Assembly. His resignation took effect on Tuesday.

Yesterday, Mr Smith admitted that the government had not yet delivered on all of its promises, but he was committed to holding its feet to the fire.

Referring to his recent appointment as chairman of the Bahamas Agricultural Industrial Corporation (BAIC), Mr Smith said the position demonstrated Mr Christie’s “tremendous” confidence in his capabilities, adding that he had hope and trust that there would be future opportunities. Mr Smith is also deputy speaker of the House of Assembly.

“(Mr Christie) said publicly, and I quote, that I am ‘the bridge to the future, the future is yours, it is from men like yourself who are prepared to stay the course.’

“I say to our leader and the present captain of this good ship, I have learned a lot in the past three years and I am willing, ready and able to represent my generation at whatever level I am needed,” Mr Smith said.

Who's Dion Smith? This man isn't even relevant.

And a shortened political career ye shall have Mr. Smith in allowing yourself to be tied to the sinking ship, SS PLP! In the next general election the vast majority of registered voters will be voting for the most qualified candidates running as independents. The PLP, FNM and DNA are failed political organizations of a different era that serve no political purpose for the Bahamas of today and tomorrow.

Who cares??? Any crooked azz lawyer would have no problems supporting this government. This smith guy is a criminal lawyer, so he feels right at home with the PLP!

Comrades the one watch is if "Step[ed sway from da PLP party" Greg stands up in the House of Assembly to "represent" the only parliamentary voice of the DNA - will he do it whilst remaining an independent member of da House. or as the new leader of da green shirts party? What happens to Bran - removed or steps aside? isn't that how Lynden Pindling replaced the seat-less Milton Taylor, as da PLP pary's leader?

It doesn't seem that any of the U50 politicians who are presently a part of the PLP can effect any change to the modus operandi of this Pingdomite-dominated party elite ...... Dion Smith is just being a political opportunist ............ a hanger-on