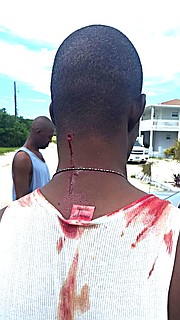 Images provided to The Tribune reportedly showing the injuries suffered by the man shot by police in Eleuthera.

THE Haitian man shot by a police officer during a round up in Eleuthera last week is being held at the Carmichael Road Detention Centre, prompting fears that he will be deported without trial.

Immigration Director William Pratt yesterday confirmed that 27-year-old Jean-Mary Justilien, who was said to be undocumented, had been transferred to the detention facility.

Mr Pratt would not comment further stating that it was a police matter.

Human rights lawyer Fred Smith, legal counsel for Mr Justilien, insisted that the migrant has been subjected to inhumane and degrading treatment, adding that officials have blocked attempts to conduct an independent medical examination.

Mr Smith said his legal team was in the process of drafting a habeas corpus application – legal recourse for unlawful imprisonment.

“Since last week the Immigration Department has refused us permission to have Mr Justilien’s doctor examine him,” Mr Smith said. “They had him on the cold floor at Central Police Station, and we understand from our sources that they are trying to deport him.

Mr Justilien was airlifted to Princess Margaret Hospital after he was shot during an immigration round up in Palmetto Point, Eleuthera, last Tuesday.

He was taken into police custody on suspicion of assaulting a police officer and an immigration officer in the execution of their duties, according to police, who have not identified or charged the man.

In a statement last week, police concluded that the alleged assault resulted in the accidental discharge of the police officer’s service revolver “causing injuries to the face and shoulder of the suspect”.

He reasoned that officials sought to fast track the deportation to cover up the ordeal and avoid pending legal action, adding that the attempt was futile.

“This is nothing less than an appalling cover up by the Immigration Department to try and protect them from litigation,” he said.

“Immigration has complained that he attacked and tried to disarm them, well put your money where your mouth is. If he did commit these offences, charge him before the courts, prove in a court of a law that he did these things and that he was here illegally. This is what the Bahamas is about, due process, the rule of law, respect for the laws passed by Parliament.”

“The only person that can legally deport someone is Dame Marguerite Pindling, I call on her to exercise some measure of justice and not to sign any deportation order put in front of her face.”

“Deporting him will not change anything. Mr Justilien has a right to sue whether he is here or not,” he added.

Seven men, including three Haitian residents and a Bahamian national, were also charged in connection with immigrant landings near James Cistern, Eleuthera, on June 3.

Another undocumented Haitian man, Johnnie Emil, was charged with four counts of assault with a deadly instrument and causing damage to a Department of Immigration vehicle.

Emil pleaded not guilty in Magistrate’s Court in Rock Sound and was remanded to prison until June 17.

Let him sue from Haiti. While he is there he can tell everyone how bad it is here and how The Bahamas should be avoided. I wonder how many Hatian's go to Cuba, which is closer to both Haiti and the U.S. than we are? Cuba must be doing something right.

I believe Fred Smith is wrong or, as usual, selective about which laws he follows. The constitution does not afford arrested illegals to the same rights and freedoms as legal persons in a similar situation. It specifically addresses illegal immigrants as one of the exceptions. Furthermore, he was not unlawfully arrested.

Blockquote Given the magnitude and scale, I seriously doubt that the labour force is currently available in Eleuthera, and a labour force skilled to immediately meet the standard required. Blockquote