Two Staff Now Suspended Over Prom Use Of Ambulance 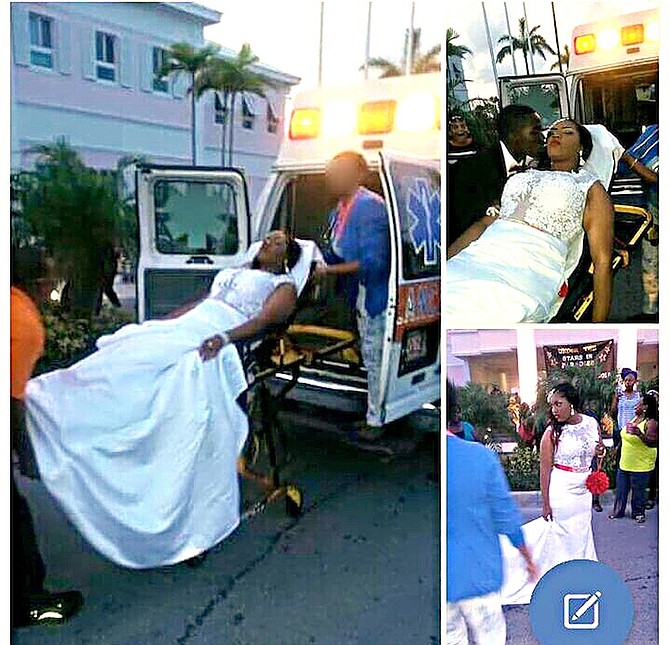 Pictures posted on Facebook showing the ambulance being used during prom.

TWO Public Hospitals Authority employees have been suspended for 10 days after allowing a teenage girl to use a government ambulance for her prom entrance in Abaco last Friday.

A nurse, who also played a role in the stunt, is also said to be under investigation.

However, Ms Terrell said the nurse is not attached to the PHA, but is employed by the Department of Public Health.

The disciplinary action came after photographs were posted on social media, showing the teen girl dressed all in white, arriving at a prom in Marsh Harbour in the ambulance. The girl, who pretended to be unconscious, was then carried out of the ambulance on a stretcher by what appears to be Emergency Services Personnel.

Her date, dressed as “Prince Charming,” then kissed her and brought her back to life, according to reports.

The story has caught international attention and has been picked up by several foreign news outlets.

In an interview with an online publication, the teen identified as Ashvonn Russell, apologised to her critics but said she can never apologise “for being artistic and creative because that makes me who I am.”

“I always dare to be different,” she added. Her prom date was identified as Johnny Auguste.

The photos, which were shared thousands of times on social media sites, received mixed reaction from the public and made international headlines as well as several talk shows.

One person said: “What about the actual persons that needed the service of this ambulance? I’m all for creativity and pushing the envelope, but certain resources are scarce and shouldn’t be used frivolously. Sorry, I don’t support the use of emergency vehicles for prom entries. Not when it is quite difficult to get a prompt response during an emergency.”

Another person said: “It doesn’t matter which island this is. An ambulance is for emergency purposes only. An ambulance is bought with our money because we pay taxes so we have a right to voice our opinions. Clear and simple, someone should be held accountable for this irresponsible act.”

However, some persons defended the action, claiming that the teen girl was salutatorian of her graduation class and also received a full scholarship to attend the College of the Bahamas.

In a statement released earlier this week, the PHA said it is “despicable” that an ambulance under the management of the authority was used in the execution of a prom. The PHA added that “disciplinary action” has been taken, and more action may be taken after the conclusion of an investigation.

The unfortunate operative word in the headline to this article is "suspended". The two involved in this senseless mind numbing event that could have easily resulted in the death of others should be removed from the taxpayers' payroll forever, i.e. fired!

So true. Fired is more like it. I can't believe the morons finding excuses and trying to justify this. These are the same ones who complain saying the government don't have this and that. Do they know the cost to move an ambulance rig? Every time that vehicle moves there is an immense cost and safety which must be considered. The fuel costs, the risk of transport as oxygen tanks are onboard. No one seems to think in our country anymore. We want to be so different that it doesn't matter how it effects others. People say she was being creative. Fine! Be creative but pay for it. Pay the standard $500-$1000 fee for the ambulance ride. Ridiculous.

Suspended for 10 days! Shakes head This news was on the talk show "The Talk". They need to be fired.