Woman dies after car pins her to wall 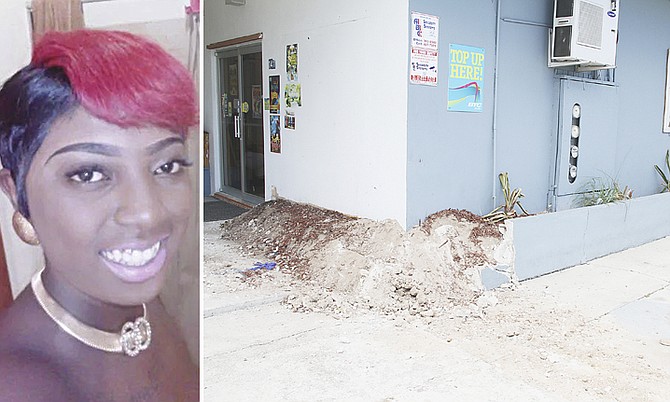 A 19-year-old mother of one died in hospital after she was hit by a vehicle outside the bar where she worked following a heated argument with a female patron early Saturday morning.

Police have not officially released her identity, however The Tribune understands the victim is Dajonne Woodside, also known as Dajji.

A man, said to be the bar’s owner, was also seriously injured by the car and was expected to have a leg amputated after the limb was wounded by the impact of the vehicle. Police have said he is in serious condition.

A 19-year-old man is in police custody assisting with the investigation.

Up to press time, police had not classified the death.

The incident occurred at Da Brick House on Gladstone Road shortly after 1am.

An eyewitness, who requested anonymity, said an argument broke out between Ms Woodside and the bar’s patron outside of the bar. The argument continued for several minutes. In the heat of the row, the witness said the victim went into the bar and returned a short time later with empty beer bottles, which she threw at the patron.

“I was there and saw the waitress and another female arguing outside of the bar,” the eyewitness said. “They were rowing and instead of resolving the issue things just got more heated. An off-duty Defence Force officer tried to mediate. The waitress I guess was so angry she went into the bar and came out with beer bottles and began to throw them at the woman who was arguing with her.

“The owner pulled up (at the) same time and basically tackled her to the floor and was asking her why she was throwing the bottles and telling her she couldn’t treat the clients like that.

“When they got up, the patron’s boyfriend got into his car, which was parked on the grass and he revved it up and rammed it into the waitress. He held his foot on the gas pedal for a very long time before he let up.”

The eyewitness said the off-duty marine arrested the man along with the female patron involved in the row and held them until police arrived.

The two victims were taken to hospital, however Ms Woodside later died of her injuries, police said.

One user said: “Dajji I just can’t hold up. I want to, but I can’t, I don’t know how to accept this. I don’t want it to be real. . .You had a beautiful personality inside and out.”

Another user wrote: “I will always remember all the good times me and you had together. I will see you on the next side of heaven. Rest on friend.”

Police have asked anyone with information on this incident to come forward.

This "ghetto culture" that you speak of is very real. I hold Lynden Pindling responsible for encouraging and facilitating this destructive, no class people, simply to keep the PLP in power

Well said, but it may very well be too late and the resulting consequences may have to run their course.

Still can't get around him crushing the woman and continuing to press gas. He deserves to be locked away. Don't say that often but he shouldn't be driving a car or be placed near any household utensil until he sorts out his anger issues.

Wow, it is so tragic how fast people resort to violence for solving their differences. It is unbelievable how normal has violence become for some people http://www.myro.ro/author/eleonora/">today.