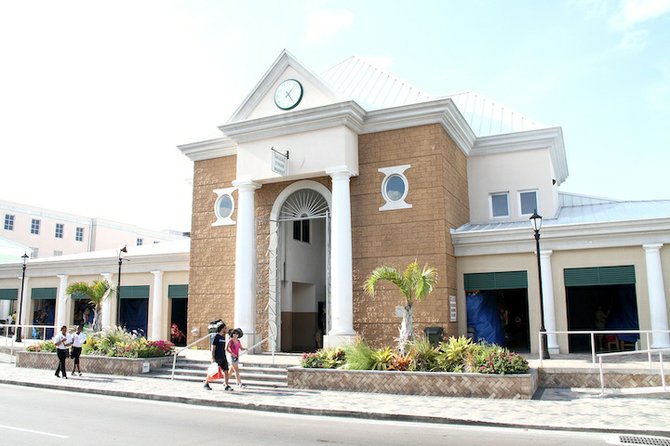 IMMIGRATION officers apprehended dozens of people in the downtown area on Tuesday as part of their efforts to clamp down on illegal immigration.

Employees working in the country illegally and those who employ them were the targets of the officers’ attention.

The officers went into Bay Street stores to conduct their search, including the downtown Straw Market.

Immigration commander Kirkland Neely, the officer-in-charge of the Immigration Enforcement Unit, said the apprehension activities were important to show that no one is above the law in the Bahamas.

“The law has been passed that shows that we have the power to charge the employer and the employee,” he told a reporter on Tuesday. “When we find that kind of infraction you can bet your last dollar that both of them would be called before the courts and charged. The new law is that we can charge the employer $10,000 or five years imprisonment or both and we intend to carry that out.”

Immigration officials added that it was important to show that officers go in to areas outside of shantytowns to apprehend illegal workers and migrants.

Those exercises coincided with the start of the government’s stricter immigration policy, which came into effect on November 1, 2014.

At the time, human rights activists said that Haitians were being unfairly targeted by the exercises.

the 10,000 dollars fine has been in place for many years. i have never heard a report of a a person employing an illegal being charged with an offense.

Nonsense. There has not been, and even the new law passed a few weeks ago does not have anything about employers being charged.

I challenge anyone to provide the Title of the law, and the chapter & section that states that employers can be charged.

No one is above the law eh? LAIR. Walk into parliament and arrest the lot. Id bet almost all can be charged if the police were allowed to do their job

The country is LITERALLY CRAWLING with illegal migrant workers walking and traveling freely all over the island with no fear whatsoever.

Just the fact that "officers apprehended dozens of people in the downtown area" is a very serious indictment on Immigration and government.

The real test question is "will these people and their employers be charged according to law" or not.

If the guilty parties are not charged, they will all be right back again, and in even greater numbers.

WAY PAST TIME for immigration and government to GET SERIOUS with illegal parasites and ANYONE CAUGHT EMPLOYING THEM!

Let's not call them parasites please. Migrants workers have been pollinators. It's swarms that's impractical for now.

Pollinators? Sure they save their employers a few bucks because of the cheap labor they provide for them...but it does nothing to benefit the country, and it definitely does not offset the cost of services provided to them.

Well, i guess a little cleanup is good from time to time. With so many immigrants in the US you ccan say that it raises the danger in the suburbs. So this should be kept under http://www.myro.ro/author/caterina/">control.

Is Mr. Neely professional enough for his position? He's often given the wrong responses. Discrimination is not people's only concern, but softening vs aggressive tactics. Every scenario is not a hunt, which seems to be his mind frame. Investigating employers and their on shift workers is a completely different process than catching persons off a landed sloop. Were there detectives that collected information before this? Did immigration discuss this with the shop owner? There's really no way of suddenly permitting workers, or changing the fact that they were illegally hired knowingly, persons with a history of work there can't avoid being discovered. Investigation in these cases accomplish the same thing.

Does a main street store inspection really require a big yellow bus and detainment on site? It's a public establishment. Many of those overstayers were brought here with their parents from young, known to the community, became quite skilled , are well respected and should be treated with human dignity in this process. Suppose they are found to be perfectly legal? They can then sue for damages, loss of profits, lie about minor injury, and the business receives bad publicity. Another Atlantis intrusion or Canadian banker roughing up should be completely avoided. A dozen migrants that aren't suspected to be new arrivals aren't worth Nassau's image. Keep tourist from being caught up in the mix.

I hope that they crossed the road and went up Market Street and checked out those shops on the left that now sell the fake bags (you know... the ones that aren't allowed in the straw market). That road (now an alley) is full of people whom I can't understand. They may not be illegal immigrants but they sure aren't Bahamian.

So they actually will hold the Straw Market stall owner accountable for having an illegal work their stall? When I see it in the papers I will believe it. The straw market has been infused with illegals for as long as I can remember but we all know that nothing will happen to these "poor", "hardworking", "industrious", VOTERS. The politician will step in and protect them, right Mr. Gray????

Absolutely correct. In addition, there is no such Law that allows employers to be charged. The NEW law that Mitchell brought forth a few weeks ago failed to included that aspect which he promised it would.

This article is a complete lie. I wish someone was there with a camera taking pics of the faces - cause you will see those same ones back working again by Monday morning.

I challenge anyone to provide the Title of the law, and the chapter & section that states that employers can be charged.

So when are they going to do something about the Mudd and Pigeon Pea in Abaco?

Comrades only da PLP Cabinet would raid straw vendors little stalls, while they drive right on by pass the mainstream businesses, some owned by big shot PLP's, employing 100 times more illegals. This cabinet should knows who mess with.

OK so if you are "small" and "poor", you can break the law? This is the problem with the Bahamas, NOBODY should get a free pass! If you break the law, no matter who the hell you are, you pay the price! We know better than to think that is the way it is, but if this country is to stand a chance in hell of ever moving FORWARD, that is the way it must be! People like our politicians and Birdie run on about "poor" people, how about we grow up and call everyone BAHAMIANS, that are ALL treated the same. That's called being FAIR.

Comrade Asiseeit I couldn't agree more cuz ya is dead-on but only sign me on to your fair enforcement position, once this PLP cabinet starts raiding and arresting owners/operators/managers of mainstream businesses. I am not okay with staring out arresting small time mostly woman's, straw vendors. The government owns and manages straw market and there are much more human ways to enforce who works out a place the government owns, arresting small people just ain't on my list at all.

Yes TAL, it is called MANAGEMENT, but when or where has our government MANAGED anything in a PROFESSIONAL manner? If they only raided the straw market there is a problem, but that is not what I understood from what was reported.

Also it should be illegal to sublet ANY government owned stall or license. Most forgien workers in the Straw Market sub let their stalls from Bahamians that are to lazy to run the space, same with Taxi and Jittney plates. Also many of these plates are granted as political favors (vote buying schemes). We know how it works and it only hurts the country, STOP IT!

Most taxi and jittney plates are owned by people who died years ago.

Exactly, how is the next generation supposed to get ahead if they want to start a taxi business? The only way in this country to get a stall, taxi, or jittney plate is to be connected to the political party in power. That's just how stupid this country is. A level playing field, balance, fairness, equality, honesty, these are ALL things that DO NOT EXIST IN THE BAHAMAS!

More noise in the marketplace while our beloved country is being run into the ground!