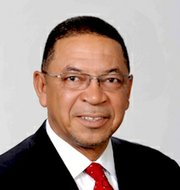 Speaking to The Tribune, Mr Chipman said he could not understand the government’s logic in undermining the work of the auditor general, whose post is constitutionally recognised.

Mr Chipman said he was angered by this administration’s blatant attempts to vindicate itself in the aftermath of Mr Bastian’s report that found a litany of weaknesses related to Urban Renewal’s management and expenditure.

He further questioned how the government could allocate additional funds to Urban Renewal 2.0 in the absence of thorough accounting on how previous taxpayer dollars allocated to the initiative have been spent.

The St Anne’s MP was responding to the recent announcement from Minister of Works Philip “Brave” Davis that the government has commissioned an independent report into Urban Renewal in response to “areas of discrepancy” in Mr Bastian’s report.

“In this 2015/2016 budget, we now have another almost $28m in recurrent expenditure that is going to be spent on Urban Renewal 2.0 and we don’t even know how the first set of money was spent,” Mr Chipman said in a recent interview. “When is someone going to give an account for it?

“How is it that the government seems not to see one thing wrong with contesting the auditor general’s report into the Small Homes Repair programme? I find it mind-boggling that the auditor general, which is constitutionally provisioned, is now being challenged.

“It is pure garbage and it should be condemned,” Mr Chipman added. “Bahamians should express outrage that the auditor is now being audited. But the auditor also found that the 52-week job initiative under the previous Ingraham administration was deficient. You don’t hear or see the government contesting that.

“This Christie government cannot pick and chose what they want when it is convenient for them. Just accept what the report said, fix the issues and move on.”

In his budget 2015/2016 communication, which was circulated to the press, but not read in the House of Assembly last week, Mr Davis said the auditor general’s report contained areas of discrepancy.

That report found, among other things, that 11 contractors were paid more than $170,000 for work that was not completed or done for the Urban Renewal Small Homes Repair project.

Mr Davis revealed last week that the government has commissioned an independent report into the programme, conducted by a consultancy firm with expertise in the field of engineering, project management and quantity surveying.

He pledged, in this unread communication, to table both reports at some point in the House of Assembly.

Earlier this week, FNM Deputy Leader Peter Turnquest also spoke out against the new report, saying it is an attempt to “interfere with” and “sabotage” the work of the Public Accounts Committee.

Mr Turnquest, who also sits on the PAC, said it is “highly suspicious and irregular” for the government “to be commissioning an internal investigation in the middle of a PAC review.”

The PAC was using Mr Bastian’s report as part of its investigation into Urban Renewal. However, after the report was leaked to the media and its contents were published, there was pushback from Urban Renewal co-chairs Cynthia Pratt and Algernon Allen. They argued that since the report had never been tabled in Parliament, the PAC was going through an illegal process. Therefore, the co-chairs have refused to appear before the PAC for questioning if the auditor’s report was in the scope of questioning.

House Speaker Dr Kendal Major has asked the PAC to stay its hand in relation to the investigation until the government tables the report in Parliament.

How can you be so indifferent and villainous by taking money from your citizen and do nothing with them? It's like you are going to buy a bread and you pay but get nothing.. I think we wouldn't be so silent in that case. http://willhill.ro">Mircea