Visitor Covered In Oil After Swimming In The Bahamas 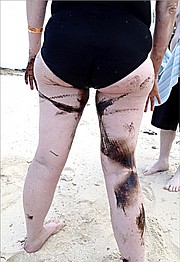 The oil covering the legs of a visitor after snorkelling off Clifton Bay.

BREEF Executive Director Casuarina McKinney-Lambert said the oil spill has been “unbearable,” negatively impacting the “precious marine environment, human health, livelihoods and the reputation of The Bahamas around the world.”

This comes despite the fact that the government pledged $10m towards the removal of oil from waters off Clifton Pier in January in response to the longstanding problem.

Last year, there were complaints that significant amounts of oil washed ashore on the nearby Adelaide Beach.

Mrs McKinney-Lambert said: “BREEF has been advocating for the clean-up of this environmental disaster for many years, and is hopeful that the clean-up will start soon. There is no time to wait.

“Last year, BREEF installed the Coral Reef Sculpture Garden to draw attention to critical threats to the marine environment, particularly the use of fossil fuels that can contaminate the environment with spills, and whose combustion changes the global climate.

“We were very pleased to hear that the prime minister has committed funds for the clean-up, and we are anxiously awaiting for it to result in remediation of the current situation, and on the ground measures to ensure that oil does not leak into the water in the future.

“This is critically important. BREEF recognises that the oil spills at Clifton have been going on for many years, and that it will take a number of steps to effectively fix this problem.”

She added: “The installation of BREEF’s Coral Reef Sculpture Garden generated tremendous positive publicity for The Bahamas around the world with print and online media reporting on the story, with over 100 stories in dozens of countries.”

“The media coverage has inspired many people to visit the country to enjoy our marine environment, and has raised the reputation of the Bahamian artists Andret John and Willicey Tynes who contributed important pieces to the sculpture garden,” she added.

“The underwater sculptures are now turning into living reefs and BREEF is monitoring both the growth of new corals on this underwater art, as well as monitoring the oil that contaminates the area daily.

“It is imperative that local and international visitors leave with a positive impression and an enthusiasm to visit again, rather than covered in oil.”

Christie sees this as evidence that all Bahamians are richly endowed with natural oil reserves everywhere in the Bahamas! Brave Davis is arranging for his clients to rent as many deep water oil drilling rigs as they possibly can!! We are about to all reap the riches of black gold in quantities beyond our wildest imagination!!! Yippee!!!!

I suspect that all our government needs to do is buy one fuel storage tank for BEC's clifton pier site and then use up all of the fuel in the leaking tank (WHICH THEY DEFINITELY KNOW ABOUT). This will immediately stop more fuel from draining into the ground and will eventually stop the fuel from draining into our once lovely ocean. Cleaning up the fuel that is currently soaked into the area around the leaky storage tank is another issue and one that I am positive will never be addressed. We just don't care enough! It's too bad the fuel isn't that flammable, because one match could get rid of the thick layer of oil, sitting on top of our ocean, in seconds.

Or is this some cat-and-mouse game between BREEF, BNT, etc and the government???????

My God! I'm beginning to think that the PLP planned all of this. They aren't as incompetent as we all thought! This is all going to plan. But who's plan? Is it the PLP's plan or is it our Yellow Knights' plan? HOLY CHRIST!!!! The PLP actually scuttled SS Bahamas!!!!!