Saying ‘I Do’ To The Right Melody 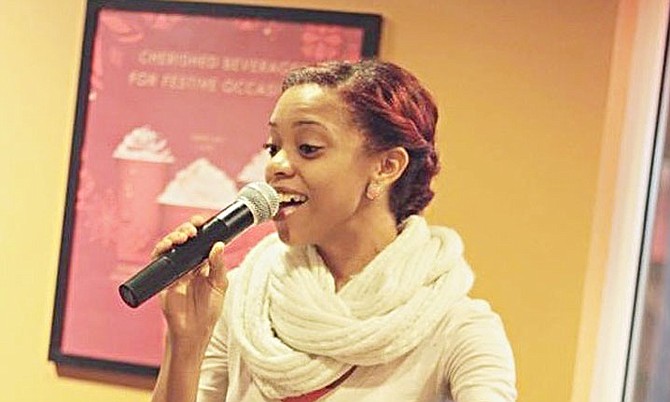 ASK any married couple what aspect of their wedding ceremony played a major part in setting the mood and they will more than likely say, music.

Beautiful music that reflects love, joy and bliss sets the mood for couples and those who look on as the newlyweds embark on a hopefully life-long journey. For this reason, many couples spend a great deal of time creating a comprehensive line-up of timeless songs that embody the spirit of love.

Bahamian singer Malikah Pinder is seeking to help couples create lasting memories with original wedding songs that are sweet and sentimental through her company “I Do Lyrics”.

“I Do Lyrics” writes original wedding songs for engaged couples. She said her mission in creating “I Do Lyrics” was to help couples get away from using the “same love songs over and over, wedding after wedding.”

“We believe that every couple embarking on this sacred journey of marriage deserves their own song that defines their unique love story,” Malikah said.

“I don’t want to sound deep, but I got the overall idea for ‘I Do Lyrics’ during a fast. God gave it to me and he gives the revelation for the songwriting.”

Since she was a little girl, Malikah always loved weddings and dreamed of what her own would be like. She later began singing at weddings and realised how much she enjoyed making people happy.

“ ‘I Do Lyrics’ does not only cater to engaged couples. That was the original concept, but it soon evolved into something more. We also cater to those who are already married by creating love songs for anniversary gifts or sing-a-grams,” she said.

After having recently launched her company, Malikah is now in the process of writing songs for several couples. This is the exciting part because she sits down with the pair, gets acquainted with them and then creates a song tailor-made especially for them.

“The first step is for the couple to fill out a comprehensive form and return it. Next, we would schedule an interview with the couple to learn more about them. We feel that knowing the personality of each couple provides a more effective and relevant song. After this, the writing process begins. This is the fun part. It actually starts with a simple melody and then the words just seem to come. Before long, an entire song is produced,” Malikah told Tribune Woman.

“One of my brides-to-be cried when she heard her song. I have gotten nothing but positive reactions from the others. All of them have said they absolutely love their songs. What’s more is that since I worked on them before ‘I Do Lyrics’ was launched and an official process was thought of, these couples were not interviewed; they are people I know. However, personal feelings they never expressed to me were included in their songs. I am told that they are extremely accurate and relevant, but I have to say again that the revelation comes from God.”

For Malikah herself the wedding bells are not ringing just yet, but she said that when that time comes she will write her own song, but have someone else perform it.

“Everyone kind of expects me to write a song and sing it at my own wedding, but because of that reason alone I may not. The cliché of a singer singing at her own wedding is another one I would like to avoid. However, in the spirit of ‘I Do Lyrics’ I will probably write my own song and have someone huge like Celine Dion sing it. Now that would be out of the box,” she said.

Malikah is currently a senior at the College of the Bahamas studying Early Childhood Education. She was born in Eleuthera but moved to Nassau to pursue tertiary education.

“The move has afforded me so many opportunities outside of school. When I moved to Nassau to begin living with my older twin sisters (owners of the cupcake business Yummy Twincakes), my mother warned them, ‘If she’s not singing, something is wrong’, and from that you can probably tell that I am always singing,” she said.

“It has been a life-long passion of mine. I have truly watched God open doors for me in this regard and he continues to do so. He has been so faithful and I am a witness that if you commit your work/plans to him, they will be established.”

What a wonderful talent...very out of the box and interesting. Tribune, where can persons make contact?