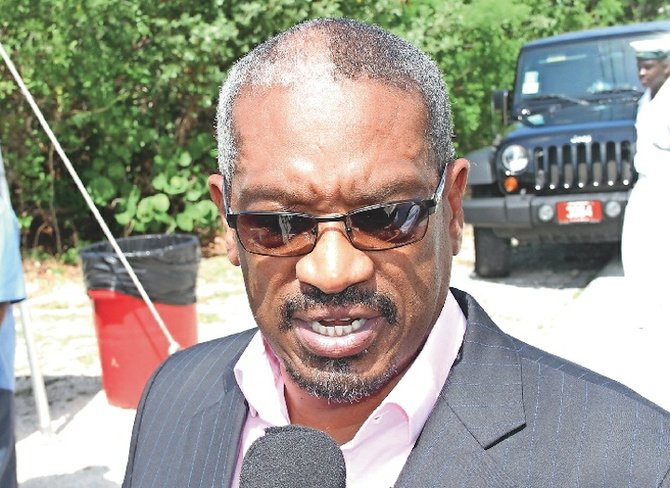 OPPOSITION Leader Dr Hubert Minnis yesterday called for an investigation into whether Royal Bahamas Defence Force Commodore Roderick Bowe was paid by the government while also working for Baha Mar.

Dr Minnis, the shadow minister of national security, said it is “unheard of” for someone with a position like Mr Bowe’s to be working for government and a private company at the same time.

His comments came a day after Minister of National Security Dr Bernard Nottage told the Nassau Guardian that Commodore Bowe was still attached to the RBDF despite starting a job at Baha Mar last week.

Dr Nottage told reporters Mr Bowe’s contract expired in January but he had not officially left the RBDF. He said the government did not seek to keep Mr Bowe on because the commodore advised him in 2012, that he did not wish for his contract to be renewed.

Dr Nottage declined to answer whether Mr Bowe was still receiving a salary from the government nor did he give a date for Mr Bowe’s official last day.

Dr Minnis told The Tribune that “something does not feel right about the situation” and an investigation is needed.

“There needs to be more answers than what is being offered,” he said. “I do not know the whole situation, but I think an investigation needs to happen to figure out what happened or is happening and we definitely need to know if the commodore was and is still being paid. You cannot work for government with that position and have another full time job like that, it doesn’t work that way,” he said.

RBDF Deputy Commodore Tellis Bethel will act as commodore until a new commodore is appointed.

Mr Bowe has served with the RBDF for 32 years, five years as commodore.

Dr; Minnis let me help you out here, many Government employees have month and months of vacation when they leave their jobs, so they are really on Vacation. Why do you always believe some one is stealing something; Be care full, they say it takes one to know one, take your mind out of the gutter just once.. and show the long serving officer the respect he deserves.

Commodore Bowe is a good man he e'ehn steal no money from nobody. He has been a good steward on the Defence force, he didnt take any training "and run", he served 30+ years. He was not promoted because of "who he know", he is not affiliated with any political party. He was promoted because of hard work and exemplary service

Btw, how many of our Cabinet Minsters are elsewhere employed? (And were during the last administration)

Please Comrade Doctor, doctor Minnis in da sweet name Jesus, exactly how many disbelieving PLP cabinet things do you thinks we can handle at any one time? Cuz we da people still need more time be logicalizing we heads around when having a friend or family member locked-up inside a police station's cell only might have created confusion and uncertainty for both the prisoner and their loved ones but not brought wedding bells right inside da jail's cell. When you can actually move the previously planned wedding ceremony, right inside the policeman's station - all sanctioned by a senior policeman's officer. We still trying make room absorb that "NO" BAMSI fire insurance scandal developing over in Andros and in the DPM's office? Cuz Minister V.Alfred done proclaimed how it was never his responsibility. Although rather strange sounding since, wasn't he always taking to the media with much pride in promoting BAMSI as he own project?

Dis black on black hate has to stop. I am happy for Bowe and wish him all the best!

This dumb ass really does not know how to pick his fights. Come on, really?

asiseeit I agree with you 100%

Fine, it may be valid but one would think, as leader of the opposition, the good Doctor would have bigger fish to fry. Take your pick, it is not like this government does not have a scandal or two brewing. That he chooses to focus on this makes me think he is trying to distract us from the real issues.

Valid once again yet still something that is minor compared to what the current government is dealing with. That we have a culture of corruption in the Bahamas is obvious to all but the blind and deaf. I am of the opinion that the leader of the opposition should choose his battles more wisely. I am no fan of the civil service but one would think he would have bigger fish to fry. Sorry i dared to question your dear leader.

This is a hard working man. He was not going to cocktail parties and biding his time. He gave clear intentions that he did not intend to renew his contract and still gave his best. They told him to go home. He could have continued in his job and been paid for his well earned vacation at the end of his service. It seems reasonable if you know you're not going to be employed in 3 months to start sending out resumes...just saying

Minnis clearly suffers from a severe form of ADHD.....he has great difficulty identifying an important subject and even greater difficulty staying on an important subject once he has struggled to identify it. The FNM political apparatus must know by now that most Bahamian voters will either not vote at all in the next general election or will cast their vote for the DNA. Most FNM supporters now cannot stomach the fact that Minnis still remains as Opposition Leader. And no one in their right mind will vote for the FNM if it means Minnis will stand a chance of becoming PM. The door has never been more open to the formation of a new political party to replace the FNM and give the DNA a run for its money in the next general election.

Where oh where is Loretta Butler-Turner??