Man Charged With Murder Of Baby Claims To Be Mentally Ill 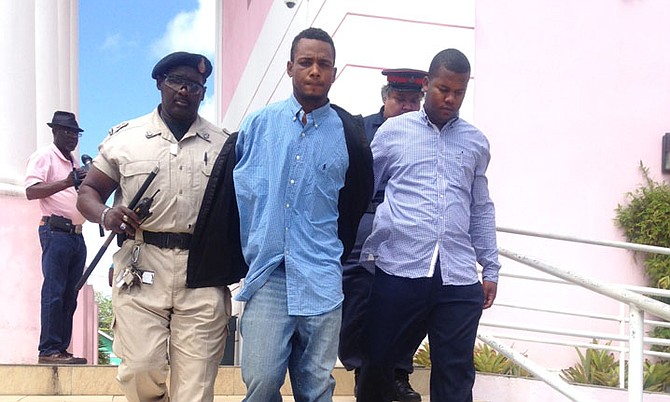 A MAN claimed to be mentally ill was arraigned in Magistrates Court on Friday in connection with the battering to death of a one-year-old baby boy last week.

Samuel Mackey, 21, of Croton Street, stood before Magistrate Andrew Forbes on a charge of murder concerning the March 6 killing of Patrick McKenzie, who was taken to the Princess Margaret Hospital in an unresponsive state around 9pm that day and pronounced dead a short while later.

Mackey was not required to enter a plea to the charge and is scheduled to reappear before Chief Magistrate Joyann Ferguson-Pratt for a status hearing on March 17.

Before he could be remanded to the Department of Corrections, his lawyer Krysta Mason-Smith raised concerns about her client.

"I'm quite troubled by my instructions," said Ms Mason-Smith. "He's been in custody since March 6 on the night of the alleged incident and he ought to have been properly before the court at the earliest yesterday (Thursday) taking into account an extension being granted. Up until 10pm on Wednesday, which was the latest they could have held him, no officer would confirm to me with certainty whether or not be had been charged," the lawyer added.

"In addition to that, you can have a look at the defendant and see his left black eye," said Ms Mason-Smith, who claimed her client had been beaten by police since March 6.

She said there were other matters that the court should be aware of but the most pressing was that Mackey was an individual "who needs some other sort of treatment".

The lawyer said her client is mentally ill "and while I am not a doctor, it is obvious he needs special treatment", urging the court to order an evaluation of her client.

"I am deeply concerned for his wellbeing at the prison. It's also been alleged that threats have been levied against him by police officers and defence force officers that he'll be raped and killed when he's remanded to prison," the magistrate was told.

The lawyer requested her client's detention record from the police and requested that he be evaluated mentally and physically and be treated accordingly.

"I've taken note of Mr Mackey's appearance," said Magistrate Forbes, who said he would personally follow up with the authorities at the prison to make provisions for Mackey's security.

The magistrate further ordered a physical and mental evaluation by the Department of Corrections. "The other issues can be filed in a civil complaint," said the magistrate.