Hearings On Human Rights Hailed As A Great First Step 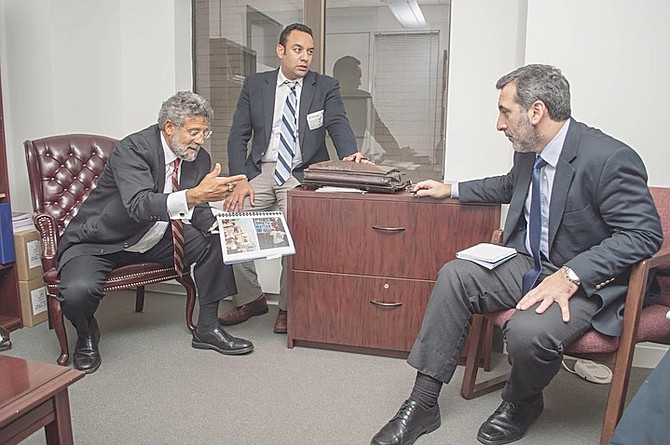 WASHINGTON, DC - Last week’s hearings on migrant human rights in the Bahamas were termed a “great first step” amid concerns from country petitioners of reprisals at home.

Diego Alcalá, deputy director of the Caribbean Institute for Human Rights, said the international recognition of the Bahamas government’s open invitation for the Inter-American Commission on Human Rights (IACHR) to conduct an on-site visit was an important foothold in the protection of the human rights of migrants.

“I take the [Bahamas] government at its word,” Mr Alcalá said. “The government has made an international recognition that it has invited the commission and it’s not just a visit. I think there is an engagement, a conversation that was started and I’m looking forward not only on an international level but seeing the government of The Bahamas following through on that dialogue.

“And not just the same actors in The Bahamas. I believe this discussion merits opening to individuals such as the Grand Bahama Human Rights Association.”

Mr Alcalá explained that a more inclusive consultation over the new legislation would drastically improve the chances of compliance with international obligations. “It’s a great first step,” he added, “and I hope it’s not the only step.”

Mr Alcalá spoke to The Tribune on the sidelines of Friday’s hearing, which was jointly requested by his organisation, the Robert F Kennedy Human Rights, and the Grand Bahama Human Rights Association (GBHRA).

During the hearing, petitioners requested that the IACHR assist The Bahamas in designing and implementing a training protocol on Human Rights for State agents, including the role of human rights defenders and their protection.

In his contribution, Mr Alcalá said: “Human rights defenders in The Bahamas are confronting a hostile environment that put their security and work at risk. Members of our delegation have been threatened for expressing their opinions against recent changes in migration policies. Also, high-level government officials have made expressions against them, minimising their work or even depicting it as ‘alarmist and inflammatory’.”

Mr Alcalá referred to threats against GBHRA executive members Fred Smith and Joe Darville with charges of criminal libel and sedition, and pointed to the cancellation of the Kreyol Connection radio show following critical statements by the government.

IACHR commissioners responded strongly to the petitioners’ fears of reprisal for participating in the hearing, pointing out that petitioners were protected under the IACHR’s conventions signed by all Organization of American States member states.

Mr Smith, the GBHRA president, told The Tribune that he has made numerous complaints to the Commissioner of Police over verbal and physical attacks he has experienced due to his environmental and human rights activism. However, he did not feel the concerns are taken seriously given the government’s own proclamation against his organisation.

Mr Smith said: “Joe Darville and I have been called social terrorists. Fred Mitchell (the Minister for Foreign Affairs) has threatened to have us prosecuted for criminal libel, sedition. On social media, we have had horrific accusations made against us, that we’re traitors against The Bahamas and that we should be deported.”

Ms Robinson also charged that the state had a duty to perform due diligence to also prevent violence and abuse, adding that reports that the government had made an arrest concerning an allegation of sexual violence at the Carmichael Road Detention Centre were well received.

She questioned what action had been taken by the government to prevent such abuses at detention facilities or elsewhere.

Mr Gomez told The Tribune that “time will tell” whether the country had successfully dispelled allegations related to its immigration policy and enforcement. “Time will tell,” he said, “we’ve said pretty much what’s in the bill. That is a matter of public record. We are committed to making sure our laws are obeyed and we are not about abusing anyone.”

In response to the recommendation that arbitrary raids and deportations are temporarily suspended pending further consultation, Mr Gomez replied: “That’s not going to happen”.

I agree! This is a great first step in the right direction. I think it's important to keep a good momentum and to follow up with another meeting in short time. Keep up the good work and many people will follow you! http://www.bran-cazare.ro/blog/jucari...">Meg

So now I hope that Fred Smith will stop his BS and see that the rest of the world will not fault the Bahamas for protecting itself in accordance with customary international laws that they all use to protect their nations!! IACHR basically told Mr. Smith. . ."we looking at the situation too". . .so far the Bahamas is toeing the line expected with their membership in all conventions that they singed on to.

licks2 - how you arrive at the conclusion that we are toeing the line? The IACHR presidents said: "We have responded and agreed to a hearing out of a LEGITIMATE CONCERN to interrogate an immigration situation that we believe may have an important impact on human rights. That is our only concern here today." She also asked a series of questions that The Bahamas simply cannot answer, considering its current immigration activities - https://www.facebook.com/video.php?v=...">https://www.facebook.com/video.php?v=...

All I have seen them defending the majority of the times are the Haitian community.When those Bahamian Defense Force officers were killed many years ago in our waters why didn't they go international with that back in the day.They are only concerned about one group of people.Why? Because either they were born in Haiti,parents are Haitian or are married to a Haitian.There has to be an ulterior motive somewhere.There is not a genuine concern for the Bahamian people.