Deal Is Expected To Cut Bills 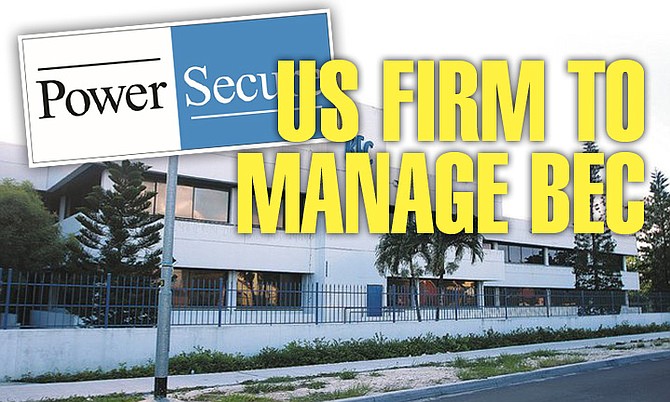 THE GOVERNMENT has selected American company PowerSecure International as the new management company for the Bahamas Electricity Corporation, giving it a five-year contract to oversee generation and transmission/distribution.

In a statement released last night, Works Minister Philip Davis confirmed the decision to engage the North Carolina-based company. The Tribune understands the decision was made early this week but Prime Minister Perry Christie informed both BEC unions and executive management yesterday morning.

The process is expected to lower electricity costs, increase energy security and reliability, and increase competitiveness as a country.

“For many years now, consumers have (had) to deal with extremely high electrical bills and far from satisfactory services from an inefficient and debt-ridden Bahamas Electricity Corporation (BEC),” Mr Davis said. “The protracted and frequent blackouts of this week and last are constant reminders of the urgent need for reform of our electrical generation, transmission and distribution systems.

“Today, I am very pleased to announce that, with the unanimous recommendation of the task force appointed to review the proposals and its financial advisors, KPMG Advisory Services, and technical advisors, DNV GL, and as a result of an extensive, robust, and patient process, the government has selected PowerSecure International Inc as the preferred bidder to manage the new BEC, both generation and transmission/distribution, for a period of five years,” Mr Davis said.

“This appointment is subject to the negotiation and finalisation of the management contract, the major terms of which have been agreed.”

According to the statement, PowerSecure specialises in utility scale solar power through its subsidiary PowerSecure Solar and has provided both solar and storm hardening services to multiple utility customers.

“With its credits, the government is satisfied that PowerSecure has the technical and financial capacity required to manage the new BEC,” Mr Davis added. “We are satisfied that value will be extracted from the existing New Providence and Family Island generation, transmission and distribution assets and that the company can provide the advanced asset management, efficiency retrofits, improved operating schemes, fuel selection and purchasing schemes that are required to set the new BEC on course to profitability.”

“In sum, and more importantly, we are satisfied that residents and commercial clients of the new BEC will have the customer experience that we all deserve,” Mr Davis added.

When contacted for comment before the official announcement, BEC Executive Chairman Leslie Miller would not confirm the selection but said he was happy the process was complete.

“I am just glad that part is over and now we can concentrate on getting better service for the Bahamian people and stopping all these blackouts,” Mr Miller said.

Bahamas Electrical Workers Union (BEWU) President Paul Maynard confirmed he had met with Prime Minister Perry Christie on the matter, but also would not disclose the name of the management company selected. However he said the union is “happy” with the choice.

“Our main concern is making sure the members are okay and getting to a point where we can stop the blackouts,” Mr Maynard said. “This is a long time coming and now the people of the Bahamas can enjoy uninterrupted supply as well as lower electricity bills. I believe the recent power outages gave the government the extra push it needed to get things done and not waste anymore time. We look forward to working with the new people to bring about some much needed change.”

The government initially announced plans to restructure BEC in August 2013.

At that time, Mr Christie said two separate companies would take over the management and power generation at BEC. He said the contracts would be signed at the end of 2013, however the process faced significant delay. Last December, Mr Davis confirmed that the government had moved away from splitting the corporation into separate generation and transmission and distribution (T&D) arms and is instead moving forward with a business model that mirrors the Nassau Airport Development Company’s (NAD) arrangement for Lynden Pindling International Airport’s (LPIA) management.

Under that arrangement, the government will retain 100 per cent equity ownership of BEC even after the private sector manager is in place.

No doubt that was part of the deal.

What a crying shame! In 2015....... the Bahamas does not possess enough educated, trained, experienced, skilled personnel that can effectively run BEC!

Where are our electrical engineers??? Where are our bright minds who know how to get it done??? Why do we always have to out-source complex projects to North American companies??? Are we not smart enough to become physicist, chemists, and engineers???

This country is an embarrassment.

Did anyone see the new product that The Tesla company unveiled today? It is a solar wall that consists of solar panels and batteries to power your home. It ties into the grid and uses smart technology to use a combination of solar power and stored energy to power an entire home. When there is a power outage the system switches to solar or battery power without the homeowner having to do anything and there is virtually no power interruption. The aim of this product is not only to produce clean, green energy but also to make homeowners less dependent on the grid. It sells for around $3,500 in the U.S., and will be available by late summer

...and the first thing BEC will do is to make it illegal to install any such system. You see those who can afford to purchase, are the only ones paying their power bills. In the words of Mr. Miller, if we lose those paying customers, BEC will go broke in a month. You misunderstand the purpose for which BEC is operated. It is not a power company, it is a slush fund for politicians and their political cronies. Any effort to permit an efficient power generation and distribution system in the Bahamas will be stamped out by the political class. Note in this announcement that the Deputy P.M. caveats that some contract negotiation remains undone. How many decades could that take?????

it is actually our Government that will make it illegal.

The Tesla battery has no solar panels on it. It's simply a battery that you can charge with grid power, or alternative power, and then can be used by your house. It also costs a lot for the amount of power it provides (10kWh, while an average home uses about 30-40kWh a day). There are already lots of options for batteries that do this exact thing for about 1/4-1/3 of the cost. It's also something a lot more Bahamians should be doing. These battery systems can be used in place of a generator for our constant blackouts.

You are talking about the back-up battery system they introduced yesterday. That one is for people who live in areas where they have different rates for electricity. It collects electricity when the rates are low and switches to batteries when the rates are high.The one they introduced today has batteries and a solar wall (not panels). Their purpose is to move to renewable energy and to service remote areas.

John, there are no solar panels on any of the Tesla batteries. They can be added but they do not come as part of it. The battery is called the Powerwall. This technology and products that do this have been on the market for years at fractions of the cost of the Tesla unit. SolarCity, one of Elon Musks other companies, which install solar systems will be using these batteries in some of their installations. When adding solar panels, the cost will more than double from what just the battery alone will be.

I take note that the announcement was made by the DPM and not - as much and loudly touted - by PGC. Trying to dodge another bullet.

Comrades in the new people taking over BEC, da wholly-owned government corporation we all know as Bahamas Resolve Ltd. (Resolve) will now buy up all the bad debs portfolio of BEC, consisting of up to $100 million of all politically and otherwise connected unpaid light bills, including those owed by hotels, commercial and residential bad accounts receivables. Resolve promises taxpayers as it has done with that other Bank of Bahamas $100 million, that it will strive to maximize the full collection value of such bad politically and otherwise connected debts.

“This appointment is subject to the negotiation and finalisation of the management contract, the major terms of which have been agreed.”

Sorry but this one line means only one thing. The next government will have to decide what to do with BEC....

This is the PLP folks. They are really good at making press releases. But that's about it really. This one little line tells me this process has not even begun yet. PLP can't do this by 2017. So sorry Power Secure but I wouldn't go popping the bubbly just yet....

I was thinking the same thing. they announcing a deal that has not been signed yet. I hope the company have their pockets stitch up.

sure. the probably will go out of business.

Let's not kill the pig before its born. The fact is they are trying to fix BEC and this company is known for innovative technologies as it has subsidiary companies that specialize in green and renewable energy. Since it is a U.S. Based company it will be savvy to letting consumers produce energy and sell it back to the grid or at least negative metering. Even a 20% reduction in electricity can translate into a significant reduction in the cost of living and if they can generate enough supply, consumers will not only be able to afford electricity but they will have an uninterrupted supply. Power Secure should be up and running before May 2017.

Bahamians are dumb stupid animals according to the FNM and PLP - what did you expect? Give all the money jobs to the white foreigner, of course.