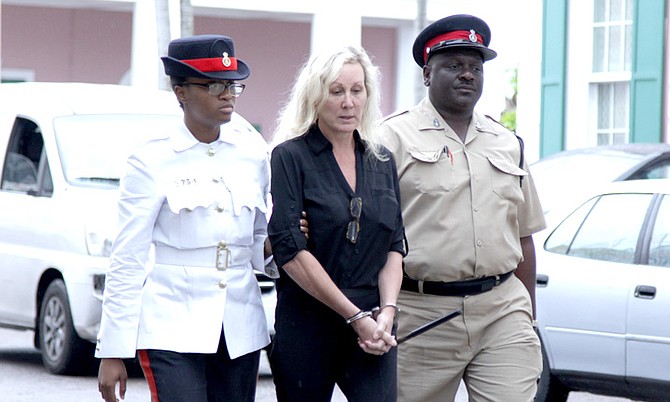 DONNA Vasyli's initial assurance to relatives that she would "be out soon" proved wishful on Friday as a judge, who was ordered by the Court of Appeal to reconsider his initial refusal of bail a month ago, denied bail a second time to the woman accused of her husband's murder.

The 54-year-old widow of Australian millionaire podiatrist Phillip Vasyli appeared downcast when brought before Senior Justice Stephen Isaacs for his decision on whether he would approve her renewed application for bail and if so, what conditions he would impose to ensure her return for trial into the fatal stabbing of her husband at their Old Fort Bay home almost six weeks ago.

Her demeanour did not change throughout the 12 minutes it took Senior Justice Isaacs to read his seven-page judgement into the record for the likely appeal from either defence or Crown that was to follow.

"The law," the judge said, "requires the applicant to demonstrate why bail should be granted. Bearing in mind that the applicant is not a citizen, and I accept that she is a permanent resident of some 20 years vintage, and has stated that she has a home in Australia and has access to finances, I am not minded to exercise my undoubted discretion to grant bail for the following reasons.

"The applicant is charged with a serious offence that carries a severe penalty. The applicant will be tried within a reasonable time within the context of prevailing circumstances in the Bahamas. The prosecution has sufficient probable grounds for the charge. There is no good reason to conclude that the circumstances of her husband's death point in any other direction at this stage of the process but to her. The seriousness of the offence and the severity of the penalty are incentives for the applicant to abscond and fail to appear for her trial."

On March 24, Mr Vasyli, 59, was found lifeless in the dining room of his luxury home with multiple stab wounds. He was the owner of four podiatry clinics - three in Sydney, Australia, and one at the Old Fort Bay Medical Centre in New Providence.

Prior to the start of her arraignment before Chief Magistrate Joyann Ferguson-Pratt six days later, the 54-year-old accused turned to relatives and supporters, assuring them that “I’ll be out soon.”

Because the chief magistrate did not have the jurisdiction to consider a bond, the accused was remanded to the Department of Corrections. Her lawyers, though, were able to get a bail hearing in the Supreme Court within three days of her arraignment just before the Easter holiday.

Senior Justice Isaacs, on April 2, noted the unusual speed in which the bail application appeared in the Supreme Court. However, he said that there had been no unreasonable delay in the case nine days after the alleged murder and noted that Vasyli had not sufficiently satisfied the court that she should be granted bail.

Murio Ducille, who had argued that his client was a fit candidate for bail, was told that he could appeal the ruling to the appellate court.

The country's second highest court, on April 20, remitted the matter to the judge after determining that he did not explicitly give his reasons for denying bail and had not considered conditions that might have alleviated concerns that she would abscond if released on a bond.

Prior to denying bail in Friday's proceedings, Senior Justice Isaacs addressed a number of the points raised by Mr Ducille at the second hearing for bail on April 29.

Mr Ducille had argued that the applicant “is saying I did not kill my husband or had a fight with my husband”.

“The marks on the upper side of my hand were from laser treatments I received on March 17, 2015 by Dr Rochelle Knowles,” the lawyer added, referring to his client’s affidavit that was made in response to that of Sgt Barry Smith, which alleged her to be a flight risk.

It was put to her by police that she stabbed her husband but she denied doing so.

The lawyer also noted that the "scanty" evidence was another factor in his client’s favour and was surprised that the prosecutor, Neil Braithwaite, maintained his objection to bail notwithstanding the weakness of the case.

Senior Justice Isaacs addressed those points and said: "I appreciate that the evidence to be led in a criminal case cannot be tested on a bail hearing. I am compelled, nevertheless, to take into account that there did not appear to be an unauthorised entry to the home on the night of the incident. The inference that can be drawn, therefore, is that where two persons are in a home and one is killed, the other person is likely responsible for that death.

The judge also noted that the standards set out by Parliament in the Bail Act of 2011 were reasonable when taking that article of the constitution into consideration for bail applications.

Mr Ducille relayed to the court that his client does not deny having a home in Australia or a relative in Florida. However, she denies having any other properties in other jurisdictions.

The lawyer said if the court was still not convinced that she was not a flight risk, “the Australian government, if requested, will cancel the appellant’s passport and put her on a stop list.”

Mr Ducille said his client was willing, of her own volition, to be placed under electronic monitoring and 24-hour house arrest, among other conditions.

In response, the judge noted that "there is no direct communication by the Australian authorities with the court, and in any event, restrictions, even the stringent ones proposed by the applicant, do not prevent a determined person from absconding.

"The 2014 amendment purports to shift the burden to the applicant to satisfy the court that bail should be granted. The applicant has submitted that the burden never shifts from the prosecution as that would be unconstitutional. That submission certainly applies to trial but Parliament has placed the burden on the applicant for bail applications. This is not a constitutional hearing and I am reluctant, without full argument, to reach any conclusion."

The lawyer referred to a number of authority cases to support the application, including the case of Cuban-Americans Daniel Ayo and Luis Mendez, who were released on $50,000 bail for the 2010 murder of Jamaican Clive Tomlinson in Bimini.

The Court of Appeal approved bail for Ayo and Mendez after the initial refusal had been challenged.

Mr Ducille argued that unlike the pair, who were involved in a crime within 48 hours of visiting the Bahamas and still got bail, Vasyli has “substantial ties to the jurisdiction”.

And while acknowledging that there were medical conditions that facilitated their pre-trial release, he noted that his client had hypertension and hypothyroidism and would be better served receiving treatment outside prison.

Senior Justice Isaacs said that the facts of that case where there was "the possibility of a strong defence, can be distinguished from the instant case".

"The applicant professes her innocence but has put nothing before the court that detaches her from the crime, or that creates some justification for anything she may have done."

Regarding her conditions, the judge noted that "there is no evidence of a medical nature sufficient for this court to grant bail in the circumstances."

Senior Justice Isaacs went on to state that he was "not minded to exercise my undoubted discretion to grant bail" because of the seriousness of the offence, no unreasonable delay in the case, sufficient evidence of probable cause and the possible penalty of the crime creating an incentive for her to abscond.

Vasyli and her lawyers, Elliot Lockhart, QC, and Mr Ducille, will have to file another appeal to the Court of Appeal.