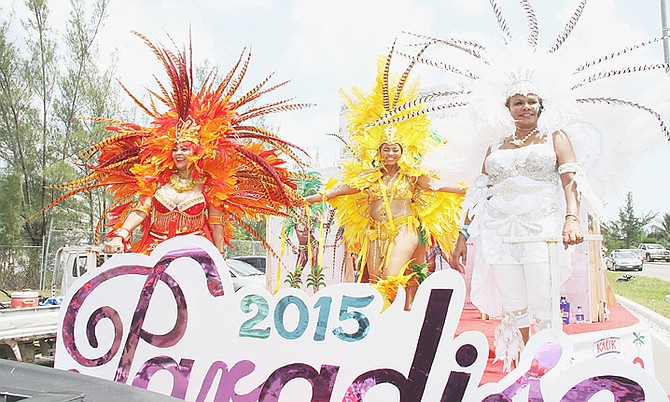 The excited spectators looked on as participants, dressed in colourful, feathered costumes, danced and “whined” in the afternoon heat to a mix of Bahamian and Soca music.

In interviews with The Tribune, some carnival band members said they would give the parade a seven or eight out of ten, noting that it was well organised.

Others said the parade was “too long,” as it took more than four hours for some to make their way along the 5.6 mile route.

Asked about this, Bahamas National Festival Commission Chairman Paul Major said: “We wanted to collaborate with the participants. (Some bands) said the initial route was too short and they wanted a more scenic route.

“We gave them a longer route instead. We will do a post-mortem of the event to assess what happened and how it could be improved.”

“The event has been all right,” participant Will Delancey said. “There were one or two obstacles like traffic, especially when coming off Nassau Street on to West Bay Street, but I would definitely do it again.”

Another participant, Leann Saunders from the group Charisma, said: “It’s been exhausting – a long walk, too long. The traffic was moving too slow. The gap between the groups was too big but the music was good.”

Another participant said: “It was an awesome event, one of the best ever in the Bahamas.”

When the event ended, it was announced that the band Masqueraders won the competition. That group had several prominent members, including Prime Minister Perry Christie’s wife Bernadette Christie, Attorney General Allyson Maynard-Gibson and Senate President Sharon Wilson, who were aboard a float for most of the parade.

Road Fever started at the Thomas A Robinson National Stadium and travelled northwest along Sports Centre Road. At the roundabout, the march turned right onto the street formerly known as Bethel Avenue and continued north to the six-legged roundabout. It then turned east onto Thompson Boulevard and continued onto Nassau Street.

Then the parade turned left onto West Bay Street and onto the Western Esplanade and continued west through to “Da Cultural Village” and ended at the West Bay Street exit.

We gave them a longer route? Wasn't this the initial route? Didn't they reject the bands alternative route proposal. According to reports, the bands "more scenic" suggestion was to go by Saunders Beach. These people play too fast and loose with their word usage. This is what pisses people off. Their words are more crooked than the six legged roundabout

Congrats to Masqueradas, they had beautiful costumes and excellent execution.

The PM announced that his grand vision for this parade was to promote small to medium sized businesses, but from BEFORE the start, the cards were stacked in favour of the biggest business, everybody knew it. They could have very well announced the winner from January 2014 when no one in the public knew anything about the parade and the biggest businesses were sitting on the planning committee.

Who gives starting capital subsidy to a small business six months after the business starts and what happened to the use of indigenous material?

including Prime Minister Perry Christie’s wife Bernadette Christie, Attorney General Allyson Maynard-Gibson and Senate President Sharon Wilson, who were aboard a float for most of the parade.

Let me guess. They dressed as Maleficent and cinderella's step-sisters?