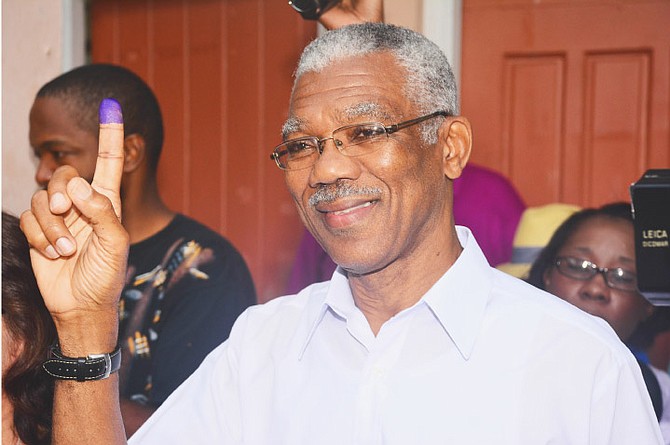 David Granger, of the A Partnership for National Unity and Alliance For Change displays his inked finger after voting in Georgetown last Monday. Mr Granger is the new president of Guyana after ousting the long-time People’s Progressive Party administration. Adrian Narine/AP Photo

In what turned-out to be a very close general election the 22-year reign of the People’s Progressive Party (PPP) as the government of Guyana has come to an end. By a narrow margin of just over 5,000 votes it fell four and a half years short of the rule of the People’s National Congress (PNC), which lasted for 27 years.

This commentary is not an analysis of the reasons for the PPP defeat with 201,457 votes (49.4 per cent) or the factors that contributed to the victory of the combined A Partnership for National Unity (APNU) and the Alliance for Change (AFC) which received 206,817 votes (50.6 per cent). The coalition will have only a one-seat majority in Parliament, but it will have the Presidency and the government.

I am more concerned here with the management of the electoral process by the Guyana Elections Commission (GECOM) and the length of time it took to declare a final result. The problem requires immediate attention, particularly as it is not the first time that it has occurred despite the fact that less than 500,000 votes had to be counted.

That there was only one violent incident of significance during the five days when the level of public frustration rose steadily is a tribute to the growing maturity of the Guyanese people.

Before discussing the need and importance to overhaul the ballot counting and result declaration process of GECOM, there are two points to be registered.

First, the new government of Guyana, to be led by David Granger as President, is not a simple coalition of the APNU and the AFC. Within APNU are several other parties, including the PNC and the Working Peoples Alliance, whose founding leader was Walter Rodney. This broad-based government is a good thing, particularly as it includes the likes of Moses Nagamootoo and Khemraj Ramjattan, former members of the executive of the PPP.

Second, on December 2, 2011, four days after the last general elections when the PPP candidate, Donald Ramotar, won the Presidency by a plurality of votes but failed to get an overall majority to control the legislature, I made the following observation in a commentary entitled, ‘Save Guyana: History summons its leaders to higher purpose’:

“Ramotar and the PPP/C have a rare and golden opportunity to retrieve Guyana from its long history of racial and divisive politics by recognising that the majority of the people of the country did not support them at this election notwithstanding the economic success they have achieved in the last few years. If Ramotar and the PPP attempt to form and operate a minority government, they will be doing so against a backdrop of considerable popular hostility. It would be a prescription for disaster. Good sense should prevail in this very troubled situation and Ramotar should make every effort to talk to the leaders of the two main opposition parties to form a government of national unity. It would be the best thing for Guyana”.

This did not happen. The hostility between a minority PPP government and an opposition-controlled legislature squandered three years and four months during which a broad-based government of representatives of all the major political parties might have advanced the country’s social cohesion as well as its economic improvement.

The leadership of the APNU-AFC alliance, prior to this election, had said they would include PPP representatives in government. This ideal might not materialise, not least because of the antagonism between the parties over the last three years and the bitterness shown in the election campaign. Nonetheless, the APNU-AFC alliance should strive vigorously to demonstrate that they are the government for all the people, particularly as the election result revealed that they won by a margin of only 1.2 per cent and almost half of the Guyanese electorate still believe the PPP represents their interest.

A new dawn for Guyana depends on demonstrated inclusion of all sections of the society, especially in the circumstances of a small majority.

Now to GECOM. Counting to determine the winner and loser in an election occurs simultaneously with the rising emotions of a public eager to know the results. The laborious requirements that the electoral law imposes on GECOM delayed a definitive declaration for four days - far too long by any standard. But, in GECOM’s defence, the electoral law requires it to have the hard paper ballots on which to make a final declaration. Getting hard paper ballots from remote and undeveloped parts of Guyana is a lengthy process.

In further defence of GECOM, Guyana’s electoral system is proportional representation. In that system, seats in Parliament can only be allocated on the basis of final results because votes are allocated both to individual regions and to the country generally. GECOM, therefore, acted responsibly in ensuring that it had an accurate and indisputable tabulation of votes on which to make a final declaration.

GECOM also acted sensibly in agreeing to a recount of 22 boxes requested by the PPP. If GECOM had not done so, it would have given credence to claims that the PPP was cheated. Confidence in the elections result would have been marred, possibly leading to civil unrest and lingering doubt about the validity of the elections. Far better that GECOM took the additional time to satisfy all parties that the final result was an unquestionable reflection of the democratic will of the people. Once in government, the APNU-AFC alliance will be glad for the meticulousness of GECOM.

Nonetheless, the tension between GECOM’s obligation for procedural accuracy and public demand for a result has the ingredients of an explosive situation. It should not be repeated at future elections.

The electoral law governing the counting and declaration of votes has to be changed. The need for hard paper ballots to be delivered to GECOM’s headquarters should be eliminated. A certified declaration by electoral officials and representatives of each contesting party at polling stations should be sufficient. That result could then be transmitted to GECOM electronically and posted publicly. The law should also grant full access to the counting process at each polling station to party agents and elections observers, including the right to an effective remedy, such as a recount at the place of poll, for any objections.

Some basic service standards should also be included in the legal framework as is the case of Canada where there is a deadline for announcing election results, and the deadline should not extend beyond two days.

Organisations such as the Commonwealth, the Organisation of American States and the International Institute for Democracy and Electoral Assistance should be invited by the new government to help the political parties, collectively, to amend the electoral laws so as to utilise modern technology for prompt and timely declaration of results while maintaining confidence in the process.

• Sir Ronald Sanders is a Senior Fellow at the Institute of Commonwealth Studies, London and Massey College, Toronto. Responses and previous commentaries: www.sirronaldsanders.com