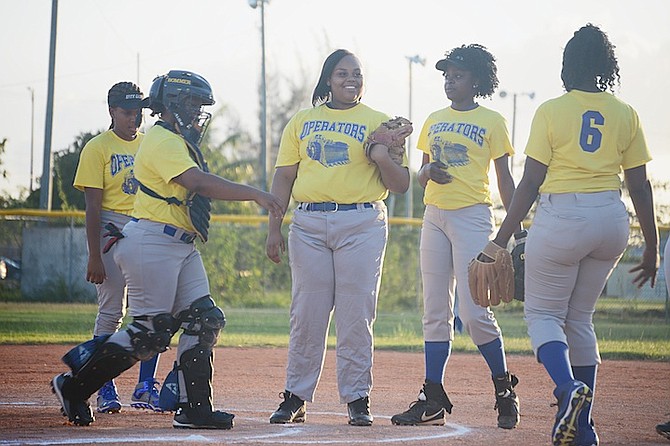 Diva Burrows just missed a pitcher’s dream and her battery mate Tacara Collie just fell short of a batter’s dream as the two combined to lead the new look Bommer Gee Lady Operators to a 15-0 rout over the hapless Black Scorpions in the Banker’s Field at the Baillou Hills Sporting Complex last night.

While the win propelled the Operators to the top of the New Providence Softball Association ladies’ division at 2-0, the loss dropped the Scorpions at the other end of the spectrum in last place at 0-2.

“I think we look pretty good,” said third sacker Tyrice Curry, one of the more experienced players returning to lead the more youthful Lady Operators. “Our pitching is coming around and our batting is improving, so things are looking good for us right now.”

It’s a far different cry for the Bommer George sponsored Lady Operators, who struggled through the season last year only to get ousted during the first round of the playoffs.

“We’re much more competitive this year as we mix the seniority with the youthfulness,” Curry said. “I think we have the ability to go all the way this year. If our pitching can hold up, we play defence and continue to hit the ball the way we are doing right now, I don’t see any reason why we can’t be a contender to win this year.”

With the defence backing her up, Burrows produced one of her best games ever as she was heading for a no-hit shutout in the abbreviated four-inning affair. But she watched as catcher Crystal Taylor ripped a one-out bloop single into left field for the Black Scorpions’ only hit in the bottom of the fourth. Burrows then got the next two batters to ground out to end the game.

“I feel great. The last game I was a little shy. I had some jitters in me, but tonight I just came out to play ball,” said Burrows, who got some relief work from Rochea Morley to see their season- opening victory over the Lady Stingers last week. “I was hoping to get the no-hit shut out tonight, but God had it where we still came out on top, despite giving up the one hit.”

Burrows had already felt off the pace for a perfect game from the second inning where she gave up a pair of walks to Crystal Taylor and Princess Mullings in between a pair of strikeouts. Her defence also allowed Shirlene Mackey and Sherry Bowleg to reach safely on base on a pair of errors in the fourth. But Burrows ended up with four strike outs to her credit.

On the offensive end of the game, Tacara Collie went 3-for-4 with a pair of doubles, driving in two runs and scoring on her three appearances on base.

The Bommers made this one look so easy, scoring four runs on five hits in the first inning. They had three runs more on four hits in the second and exploded for five runs on four hits off Black Scorpions’ ace Marvelle Miller, who didn’t come out for the fourth inning. Sherry Bowleg did the honours and slowed down the Lady Operators a bit as they added three more runs on four hits.

The Jmel Panthers were scheduled to face the Chances Mighty Mitts in the men’s feature game, but the results were not available up to press time last night.