Another Dump Fire Breaks Out Over Weekend 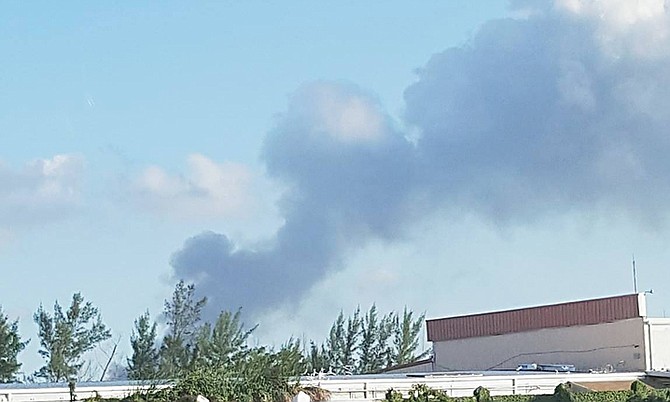 OFFICIALS at the New Providence landfill were fighting a new fire at the city dump that burned over the weekend, causing a nuisance to area residents.

Democratic National Alliance Leader Branville McCartney yesterday expressed his frustration at the latest fire, and criticised successive PLP and FNM administrations for failing to improve conditions at the Harold Road landfill that would mitigate or completely prevent such fires from ever taking place.

He questioned what it would take to have a government that is “smart enough and proactive enough to approach this problem head-on, find a solution and solve it once and for all.”

According to a statement on Saturday from Renew Bahamas, the company responsible for managing and operating the landfill, officials were battling a fire “at the top of the tipping floor at the Harold Road landfill.”

According to the statement, Renew Bahamas’ Fire Response team was “immediately mobilised” to combat the blaze. Attempts to contact officials at Renew Bahamas for an update were unsuccessful up to press time.

“In my opinion we are now environmental outlaws,” Mr McCartney said yesterday. “It appears as though we hold very little regard for our environment and even less regard for the human lives affected by irresponsible and negligent choices.

“The residents of New Providence who are situated west of the landfill have been sitting under a cloud of smoke for the past 48 hours, and periodically for the past seven years. Their smoke-filled homes, a testament to the sad state of our country.

He added: “We demand action, we demand solutions, we demand leadership. The inaction of successive administrations with regards to the conditions that exist at the dump is frustrating at best. If you do not have the answers, get out of the way so someone else can solve the problem.”

“What will it take for someone to hear the cries of desperation and act responsibly? Do we need to wait for 10 years for data to support the notion that what is happening is having negative health affects on our citizens, or are we smart enough and proactive enough to approach this problem head-on, find a solution and solve it once and for all?”

In February, Renew Bahamas officials announced plans to build and manage the nation’s first material’s recycling facility at the Harold Road landfill. Company President and CEO Gerhard Beukes called the announcement of the “multi-faceted, 125,000 square foot facility” the start of converting one of the nation’s biggest issues into a true “Bahamian success story”.

It is hoped that this facility would reduce the number of fires at the landfill, which have been a persistent problem for years.

In January, Environment Minister Kenred Dorsett expressed disgust at what he called an “ongoing problem of arson at the landfill and an inability to identify the persons who access it to light the fires.”

He said the fires would not deter the government “in any way, shape or form with respect to the reforms that we see necessary for landfills not only in New Providence, but all of the Family Islands”.

He questioned what it would take to have a government that is “smart enough and proactive enough to approach this problem head-on, find a solution and solve it once and for all.”

a question for the ages indeed sir