Farkas-Kerzner In Deal For Baha Mar 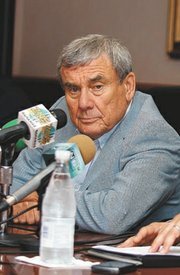 ACCORDING to sources close to the negotiations, The Tribune  has learned that a deal in principle has been struck for Baha Mar between Island Capital Group LLC, a private real estate merchant bank led by Andrew Farkas and partnered by hotel magnate Sol Kerzner,  the Export-Import Bank of China and China State Construction Engineering Corporation Ltd.

This will ultimately lead to the two billionaire investors being exclusively responsible for the restructuring, financing, completion, opening and operating of the beleaguered $3.5 billion  resort on Cable Beach. It would bring to an abrupt end any further actions by Supreme  Court appointed receivers.

The Tribune has learned that representatives from Island Capital Group have been in Beijing working out the details of the agreement, which is understood to be awaiting the  rubber stamp. The Tribune also understands that the final aim is to analyse the debts, contracts and other financing needs with a view to concluding what is definitively required to be undertaken to make the resort ready for its long-delayed grand opening over the next six to nine months.

Last month Baha Mar was put into receivership, ending  a summer of insolvency which saw over 2,000 employees being laid off. It was originally scheduled to open in December 2014.

“Should these reports be true,” said a prominent financial analyst last night who wished to remain anonymous, “it’s music to my ears. I believe that thousands of unemployed Bahamians an contractors may be jumping around with joy. Sol Kerzner revitalised the Bahamas and our reputation in the 1990s. I wait with bated breath to see if the reports are confirmed that Mr Kerzner has joined with Mr Farkas to save us yet again,”

A close friend of the pair said: “With Mr Farkas’ legendary deal making skills, global connections and Caribbean heritage, coupled with Sir Sol’s operational expertise and, unparalleled ability to execute hotel investments of this magnitude - in unforgiving and unique landscapes like the Bahamian islands -  I am certain the Bahamian public will welcome the news of their return. This sequel could have the potential to rival Mr Andrew Farkas’ and Sir Sol’s most prolific runs over the past 20 years.”

Mr Farkas left Salomon Brothers and founded his own property investment company, Metropolitan Asset Group, with $5 million from 10 investors. It eventually became Insignia Financial Group, one of the largest owners and operators of multi-family housing units in the US, according to The Real Deal, The New York Real Estate News. “The company at one time controlled some 350,000 homes and 200 million square feet of commercial space before it was sold,” it reported.

Another friend suggested this also will be a kind of “redemption” for  Mr Kerzner. The innovative 80-year-old South African-born hotelier transformed Atlantis, Paradise Island, after acquiring it in 1994, and owned the One&Only luxury resort chain. He sold the Atlantis resort to Brookfield in 2012 and retired from the hotel industry last year.

A spokesperson for Mr Farkas declined to comment on the report. The Tribune was unable to make contact with Mr Kerzner last night to confirm the report. The future involvement of developer Sarkis Izmirlian is also unclear under these arrangements.

Baha Mar filed for Chapter 11 bankruptcy protection in a US Bankruptcy Court for 15 of its companies on June 29. However, in September, a US judge threw out the Chapter 11 cases for Baha Mar’s Bahamian companies.

On September 4, Edmund Rahming of KRyS Global, Mark Nicholas Cropper and Alastair Beveridge of AlixPartners Services UK were appointed as joint provisional liquidators and given the task of overseeing the company. In October, they received approval from the Supreme Court to make 2,020 Baha Mar employees redundant due to the resort’s insolvency.

On October 30 following the Supreme Court’s ruling, Mr Winder said receivership would allow for the continuation of the process started by the court appointed liquidators.

Robert Myers, President of Caribbean Landscape Ltd, one of many local contractors on the project still awaiting full payment for work performed at Baha Mar had said: “It’s an absolute disaster. We desperately need this project to be successful as an ongoing part of our economy.”

A very welcome, and some may say, surprising, bolt from the blue. I wonder how closely the new investors will look at the resort contacts already meted out to various PLP's and their families and cronies......not very closely, if at all, would be my guess. The "cost" of doing business will be to allow those with their snouts already in the trough to keep them there. Now all Christie has to do is figure out a way to get rid of Izmirlian once and for all. Island for Sale

Just another pie in the sky Christie-promise that will never materialize......and to think Christie believes the thousands of unemployed in our country today can put food on the table for their families, pay their bank loans, pay their light bills, pay school fees for their children and buy their schools supplies, uniforms and shoes, all off of his hot air promises! What a monsterous demon Christie has become!!

Does anyone else think this was all planned some time ago? It's only just now being conveniently revealed in the nick of time and just before liquidations? And to keep putting off a court date to keep up the pretense that the deal could be salvaged? What a farce this whole mess has been (and continues to be) Nation for sale once more. Remember all the concessions for Atlantis Part I? Now comes the next phase. What will the Bahamas government to give away this time?

well, well...we'll see how much luck he has in dealing with these corrupt Chinese and inept Bahamian govt people....so lets just sit back and watch the games begin.....hahaha....

Nothing but smoke and mirrors on the part of big names being paid to make it look like the Chinese will not be in the picture as the true owners of Baha Mar after the Izmirlian family's US$900+ million equity stake in the project was wrongfully snatched by the Christie-led PLP government in a devious corrupt nationalization scheme and then given to the Chinese government. Just ask someone like Peter Reisman at the Island Capital Group LLC. Here's how they describe these types of fronting arrangements for their clients like the Chinese government on their website:

C-III Asset Management is the named Special Servicer on over $127 billion in commercial real estate loans within 90 CMBS trusts and the primary servicer for a portfolio of approximately $20 billion in performing loans."

In this particular case, the government agency that is the client is the China Export Import Bank. The Chinese government have merely engaged the Island Capital Group as a Special Servicer to create from an appearance standpoint some distance between themselves and their deceitfully and corruptly acquired majority ownership of the Baha Mar properties. Baha Mar has become one of several investment projects around the world effectively stolen by the Chinese government from private sector investors like the Izmirlian family who are foolish enough to get ensnared in the web of deceit and corruption that the Chinese government builds with other corrupt governments around the world like the Christie-led PLP government. Yep, all nothing but smoke & mirrors to keep the wool pulled down tightly over the eyes of the Bahamian people!

As the world turns. Hello Mr. Kerzner, we know you are eighty years old and retired but we can make it worth your while. For a cool 20 million all we need is your name on this deal.

I agree, asking the King of our modern day Tourisim Product to take over a Competitor who vowed to be "bigger and better" than Alantis is one thing from an ego perspective, but to expect the King to also now destroy what continues to represent the Jewel in his Crown, however lost, in order to succeed is simply never going to happen, and in turn, this "supposed" deal makes little, if any sense.

it's not a jewel in Kerzners crown- he was forced to sell it three years ago. he lost Atlantis and has no financial interest in it- perhaps Bahamar will be a part of his redemption story ...

I noted he "lost" it, my point was expecting him to now destroy it is unrealistic.

While it may have some affect on Atlantis, Baha Mar will not destroy it. There will be more than enough tourists for both hotels.

The Izmirlian family recognized the dire need for Baha Mar to obtain Delaware Chapter 11 bankruptcy protection against the wrongful liquidity squeeze play that the Chinese state-controlled general contractor (China Construction Co.) and lender (China Export-Import Bank) had subjected it to with the help of the Christie-led PLP government. Now the vultures (provisional liquidators and their lawyers and accountants, receiver and his lawyers and accountants, the growing multitude of financial and engineering consultants and their lawyers and accountants, etc. etc.) have all landed on the dead carcass of Baha Mar to devour what they can, creating for the project a liquidity crisis more than 100 times greater than the one Baha Mar originally had at the end of June 2015 when Sarkis filed for Chapter 11 in the U.S. It is now the Chinese government who is having to pay all the bills submitted by the very costly vultures and one has to wonder how long the Chinese government will continue doing so before they realize it may be better to cut their losses. But Red China has to weigh everything against all the benefits it has received and continues to receive from the following: (1) the Chinese labour it has and continues to employ on projects in the Bahamas; (2) the Izmirlian familiy's US$900+ million equity stake in the project handed over to it by the Christie-led PLP government; (3) the geo-political stronghold gained in the Western Hemisphere right under and next to the U.S.A.; (4) the strategic spy post it will have (to be known as The Pointe) immediately across the street from the U.S. Embassy in the Bahamas; (5) the access for its latest class of nuclear powered submarines to the Tongue of the Ocean deep water trench; and so on, and so on. I just can't wait until Americans find out from Donald Trump, Ted Cruze or Rubio in the crucial run-up period to the next presidential election what Red China has been doing right on Uncle Sam's door step (right under his nose) with the help of the Christie-led PLP government elected by the Bahamian people! If Bahamians think its hard for them to get a U.S. travel or student visa now....just wait!

Agree, thank you for pointing it out: the chicoms have been quietly erecting a base adjacent to America's southeast coast with PLP's ble$$ing.

"Use capitalism to build communism to destroy the West." - official state policy of the Peoples' Republic of China

This just in. In general, "businessmen" will jump into bed with anybody if they think there's a chance they might screw somebody.

Regardless 5 years, 5 months ago