Mp: If I Don’T Get Nomination, I Will Bow Out Of Front Line 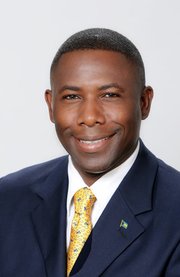 BAMBOO Town MP Renward Wells said yesterday he would not return to front line politics if he did not secure a nomination with the Free National Movement in the next general election.

Mr Wells said the decision on whether he would become the standard bearer for the FNM in 2017 was the sole discretion of the constituency branch. The MP left the Progressive Liberal Party to join the Official Opposition last week.

He told The Tribune yesterday that he has received a “better welcome” from the FNM than when he left his fledgling third party – the National Development Party - to join the PLP in 2011. He added that he has yet to see the discord that has reportedly fractured the FNM.

“If the FNM branch or constituents will have me then, yes I will run again,” he said when contacted for comment. “It is their things, they can decide who they want to give it to. It is their job for them to choose.

Mr Wells added: “There are other ways to make a contribution. This generation, we are all speaking the same things - the need for food security, energy security, and better education. I believe a new day will dawn, and there will be a better brighter Bahamas.”

He told The Tribune that the FNM’s leadership and ground troops that have approached him since the move have been very supportive of them, with the exception of “one or two persons” on social media.

Both Dr Rollins and Mr Wells were fired from their government posts in 2014. Mr Wells was removed from his post as parliamentary secretary in the Ministry of Works over a $600m letter of intent scandal, and Dr Rollins from his post as Gaming Board chairman after he launched into a scathing critique of Prime Minister Perry Christie.

She said the former PLP had proved himself to be “selfish” and “unreliable,” and accused him of “rank hypocrisy”.

Yesterday, Mr Wells explained that while he loved his former party branch and its members he was not surprised by the political attack.

“They have a right to say things to me that they feel,” he said, “all the things they spoke about have been adjudicated on in the press a long time ago. To try and rehash and pull up other things with an attempt to undermine me or my character – that’s politics, that’s expected and I assume a lot more of those kinds of things, I would expect to see in a campaign going forward.”

He added: “I always take statements in light of who’s saying it and why they are saying it.”

The Bamboo Town MP maintained that he would continue to promote his ideals and principles, which he said were not affected by his new platform.

He explained that he did not consider becoming an independent MP because it would limit his ability to effect change even if he were re-elected to the House of Assembly.

“Even when I was in the third party movement, many people would say ‘I like what you say but I can’t vote for y’all, if I put you in you can’t do nothing for me.’ (Bahamians) want to vote for an entity that once you hit the ground I can see an effect, not to put you in and you preach and preach in the House of Assembly and maybe one day you will get others to make change.”

When asked about the possibility of running for a post in the next FNM convention, he said that he did not see himself vying for an executive position within the FNM in the “immediate future.”

Both Renward Wells and Andre Rollins should be well aware that neither of them will secure a nomination within the FNM.

The general consensus within that party is that both of them are opportunistic parasites seeking to enhance their own personal interest, which many believe to be conventional power and clout.

Minnis is really showing his true colours now......he's so power hungry to be PM that he would cut a deal with the devil himself......and if you think the Bahamas is experiencing its darkest days under Christie, well.....you just can't begin to imagine how much worse off things will quickly get under a Minnis-led FNM government......the thought of Minnis ever becoming PM sends chills running down the spine of many many Bahamians!

That's true. This move says a lot about Hubert Minnis. The FNM has just lost my vote. Looks like me nor my household will be voting in 2017. Again.

Sorry but the thought of Comrade Christie serving yet another term sends an even bigger chill down my spine.

Why wait until you aren't nominated, Mr. Wells? Now is as good a time as any to get out of politics. Until you come clean with all the details of the botched signing, I don't want you anywhere near the FNM. I wonder if Mr. Minnis is thinking of the liability you are, or if he is just too blind and power hungry to see straight.

I have always liked Mr: Wells and I am very sorry to see him leave the PLP Party. He is nothing like Rollins. I wish him and his family all the best and may God be always with him.

He ein got much more party to jump to dats why

Hey Renward...who in the hell cares?