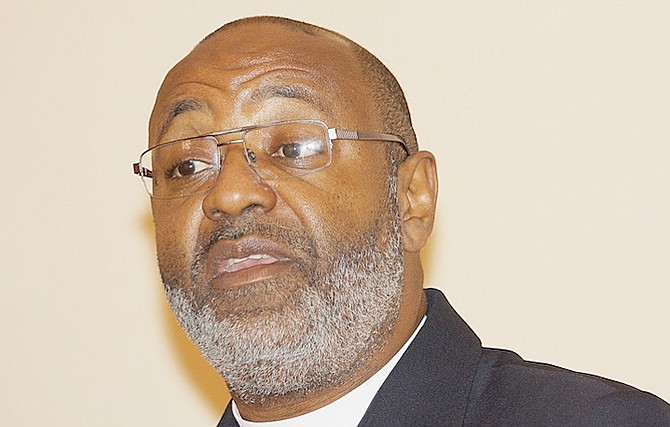 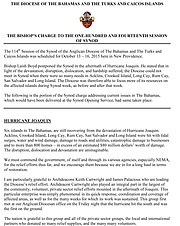 ANGLICAN Diocesan Bishop Laish Boyd said the gaming sector “does not add value to our economy” and called on the government to “lead a fuller inquiry into the social and moral side effects” of gambling.

In his Charge to the 114th session of the Synod, Bishop Boyd said gambling “gouges out a chunk of flesh from the torso of this nation and creates syndrome of ill effects that will call for a lot of repair and healing”.

Bishop Boyd postponed the Synod last month in the aftermath of Hurricane Joaquin “in light of the devastation, disruption, dislocation, and hardship suffered” in the islands battered by the storm, but in the intended annual address he touched on a number of social issues affecting the country.

“The gaming business does not add any value to the economy,” he said. “It does not grow the economy. It takes money out which goes as exorbitant profit to the various gaming houses. It employs a relatively small number of persons in proportion to its huge turnover; it pays taxes and makes use of certain goods and services, among them rental of property.

“However, it is a tiny sector of the economy in that regard. What it does do is extract money from the economy of islands, communities and cities – funds which those locations could ill afford to lose,” Bishop Boyd said.

“All over our archipelago there are web shops, even in very small Family Island communities, and the number is growing. Persons patronise these establishments by choice, but their choice drains small Family Island communities. It would shock the world to know the tens of thousands – and in some cases, hundreds of thousands of dollars - that leave small communities every month in web shop takings.”

Bishop Boyd also said he was “dismayed” that the government has not held its promised constitutional referendum on gender equality.

“I have stated publicly before that I support all four proposed amendments, that they will only bring our laws current with best practices in citizenship and inheritance matters across the planet, and that they provide a level of justice in an area where many of our sons and daughters, and grandsons and granddaughters, currently suffer injustice,” Bishop Boyd said.

“I am alarmed that the government has not set a date for a referendum. If the government is uncertain that a majority of members of Parliament will vote in favour of the motion, then I am alarmed at the Parliament. Where do we go from here? What is happening in a country that so many consider to be ‘progressive’ and ‘advanced’ if we cannot address these four amendments?”

The government had initially set the constitutional referendum for June 2013, but later changed the date to November 2013.

However, the matter was again postponed, but was expected to take place before the end of June 2014. That deadline was missed and in July 2014 Mr Christie announced the vote would take place on November 6, 2014, however that target was not met.

Earlier this year, Mr Christie said he wanted to hold the referendum in June. However, last month, Constitutional Commission Chairman Sean McWeeney said the referendum would not take place this year.

For the full text of Bishop Boyd’s Charge to the Synod, visit tribune242.com.

It amazes me that poor people are the ones fighting hardest for the webshops. It's like a drug addict saying please don't send my pusher to jail.

Unfortunately for Bishop Boyd, the government cannot hold an inquiry into gambling, as it is now totally in the thrall of the webshop owners. Any inquiry would either be spun so that it points to the (dubious) benefits gambling has on the country, or would be a whitewash that ignores the beliefs of the majority of citizens (that gambling is a bad influence)

Lest we forget, it is worth pointing out once again that this Government ignored the will of the public at the last referendum........this assault on democracy must always be at the forefront of any discussion on gambling

Seems to me the people vote to support gambling and number houses every time they enter the premises and plunk down a dollar.

Amazing seeing Gaming Gamblers openly display how much is won. But the losses are pushed into the realm of total darkness.

Comrade Bishop Laish the government in its 2012 General Election Manifesto PLEDGED the voters that a PLP government WOULD HOLD A referendum on establishing a National Lottery.
What the PLP cabinet give the people was a referendum hell bent intent on blindsiding their true intentions as a PLP cabinet, the creation of a Numbers Operators Cartel.
Unfortunately, both the PLP and red shirts parties have accepted campaign donations from the very people they have now licensed.
Minnis and Company have too now gone all Numbers Cartel silent.
Still none this can hold a candle to Minnis's doing his hi-five with Renward and his still puling puzzling Letter of Intent. .
Why even bother showing up at your polling stations come the 2017 General, when these two political parties are nothing but adoption centers for each others disgruntled sitting and wanna-be MP's and political pundits.
PLP and FNM are nothing but a dysfunctional political family of one kinds.

Are the activities that are conducted in the various foreign owned casinos in this country considered gambling as well? If we are going to talk about gambling as a morally issue then all gambling activities emanating from this jurisdiction should be subject to the same criteria because as a moral issue there is and ought to be a moral equivalence.

Comrade JohnDoe this has infested not only the PLP but the red party too. Unfortunately, each and every time this PLP cabinet gives the red party a wet horses gift to their mouths - they respond by forging cozy arrangements with PLP's.
Here's a fact. Neither the leadership of the PLP, nor the red party are willing to listen to their membership. So much so, that neither thinks its a smart idea to risk holding their respective party's convention.
Rest assured had Minnis been facing a vote at convention, he would never have given Renward da hi-five for fast-tracking his red membership.