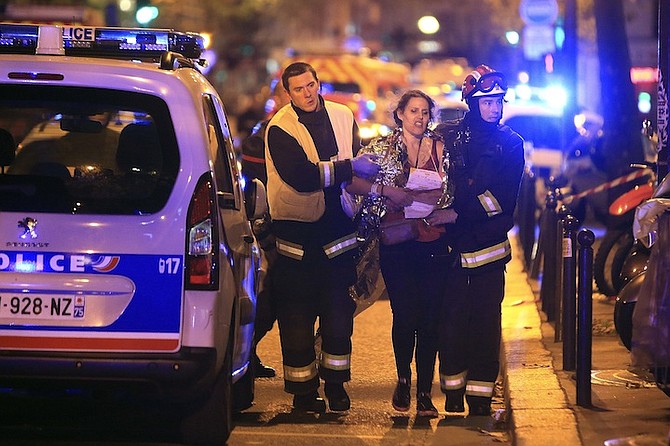 Rescue workers help a woman outside the Bataclan theater in Paris, Friday. (AP)

THE government of the Bahamas has expressed “its deep regrets over the loss of life from the horrific shootings in Paris.” “We condemn these barbaric acts in the strongest terms,” said a statement released by the government on the weekend. “We extend our condolences to the families of the victims.

“Instructions were given to our honorary consul in Kingston to convey these sentiments tonight to the French ambassador to the Bahamas who lives there. A diplomatic note will follow.

“The Bahamas stands ready to work with our Caricom allies and the international community to combat this problem,” the statement added.

Prime Minister Gaston Brown of Antigua and Barbuda also extended his people’s ”profound sympathy for the loss of life and injuries perpetrated by the despicable act of terrorism in Paris on Friday, November 13, for which ISIS claims to be responsible.

“Terrorism,” he said, “is a scourge upon our common humanity. The people of all countries have a right to live in freedom within the laws that govern our international system. In our 21st Century world, which has become inextricably interlinked, terrorism in all its forms, particularly directed at innocent civilians, must be halted by global action.

“Our prayers and good wishes are with you and the people of France.”

A series of unprecedented attacks on popular night spots Friday night killed more than 100 people in Paris, the Associated Press reported. Officials have said this was the deadliest violence to strike France since World War II.

French President François Hollande condemned it as a terrorist attack and pledged that France would stand firm against its foes.

When the attacks were over, eight attackers were dead — seven of them in suicide explosions, one killed by security forces in the music venue, Paris prosecutor’s spokeswoman Agnes Thibault-Lecuivre told The Associated Press.

The death toll was at least 120 people at six sites, including the national stadium and a circle of popular nightspots, Ms Thibault-Lecuivre said.

Many people do not understand the biblical significance of the attacks on France and the effects of what is happening in the middle east. Christians are under attack and being tortured and slaughtered. While it may have started with France the main target is Isreal. Damascus or Syria will be destroyed (it is a breeding ground for terrorists and anti Christian groups ) and turned into a heap of rubble. Russia along with allies including Ethiopia and Lybia will try to invade Iseral but they will be turned back. In the main time China is about starting a new world economy and plans to control it. It has created a (fake) weak economy and loaning money very cheaply. Many countries are now becoming indebite to China and will not be able to pay this debt.

Considering christian nations have been destroying the middle east for centuries with colonialism and then GunBoat Diplomacy.Christianity was spread with war and guns by the europeans. and more recently Are we forgetting the Iran contra affair, the Iran Iraq war,the first gulf war, the second gulf war, The war in Lebanon with Israel? Get some facts to back up your statements my friend. How will Libya invade Israel? Oh that's golden... can't wait hear that explanation

BRICS supposed world bank is to counter a country that has already being manipulating it's 'New world order' for decades. The United States.

Maybe you need to learn to read. I said Russia, along with her allies ( one of whom is Lybia. Doesn't necessarily mean Lybia has to do the actual invading. They will be supporting them. Do you know who/what ISIS is and who created it?

Please sir go and read about the current situation inside of Libya. You are talking directly out of your head. I say no more.

Educate yourself my friend on how a country going through what Libya is is going to join Russia along with Ethiopia and invade Israel. Think about the implications of such an attack. Does that make sense to you?

Judging by the way you constructed your argument I know the answer to that last question.

Good Day to you sir

“The Bahamas stands ready to work with our Caricom allies and the international community to combat this problem,”
--- so let me see if I have this right... the Bahamas, is going to help someone else battle crime ? This is a joke, right ???

Christians under attack. Last time I check Muslims are being killed everyday.

I did not write it, GOD did! . "GOD warns Iran (Persia), with Russia (Magog), and a coalition of allies (including Turkey, Libya, Sudan) will go to war and will invade Israel. In Ezekiel 38-39 the Bible warns this coming war between Iran (Persia) and Israel will take place sometime after Israel has been re-gathered into Her land as a nation (which was fulfilled on May 14, 1948) ... this prophetic war has never yet taken place ... the only time in history Persia (Iran) has ever gone to war against Israel was to help Israel throw off the yoke of the Byzantine Empire around 614 AD.

THIS WAR will be unlike any other war in history ... this war will unleash a series of IRREVERSIBLE events which will change the world forever. God has set aside two whole chapters in the Bible to warn Mankind of this coming war ...

THE BIBLE warns the US will NOT defend Israel. According to the Bible, Israel must stand alone ... with God. For when this coming war does finally start, the United States will be unwilling (or unable) to help Israel defend herself' and I will have a Good day, with God.