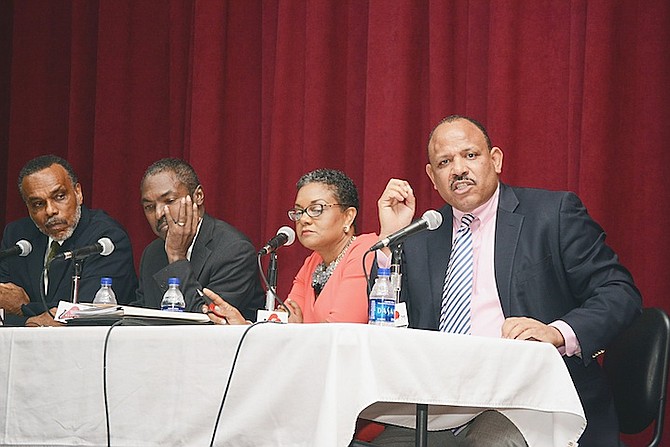 A NATIONAL Health Insurance town hall meeting at the College of the Bahamas last night exposed deep concern and ambivalence among Bahamians about the government’s proposed NHI scheme.

Though sparsely attended, the tenor of the event recalled meetings officials held on Value Added Tax (VAT) before scratching their initial plans, postponing the introduction date to educate Bahamians and allow for greater consultation with stakeholders.

The government’s plan to modernize the country––this time through improving the health care system––is once again raising concerns among stakeholders who are calling for more specifics ahead of the planned January rollout.

Chief among these concerns is the cost of the proposed scheme, with one Bahamian likening the government’s handling of the issue to a person who promises to treat others to a luxury dinner without budgeting for the event.

Among those who spoke during the town hall meeting were a cancer survivor whose monthly bill once came to $75,000 and a middle aged woman, Carolyn Strachan, who said a friend died last week after suffering a “coronary attack” in the hospital while “three shifts changed” around her.

“You should already know the cost,” she shouted, saying Bahamians are tired of being duped by politicians who don’t disclose all relevant information upfront.

Among the panelists, an often visibly irritated Chief Medical Officer (CMO) Dr Glenn Beneby spent the night emphasizing that the country must begin somewhere with universal healthcare coverage, even if this means filling out key information gaps and providing key healthcare upgrades in the future.

“What will the primary care model give?” she asked, adding that the BIA hopes for changes to the government’s current NHI model and a reasonable cost estimation for the scheme.

For well-known physician Dr Duane Sands, the government’s insistence on rolling out a primary care phase of NHI without concentrating on providing people with catastrophic coverage is tantamount to ignoring the most pressing healthcare issues facing Bahamians.

“Primary health care will take a generation to see value in,” he said.

Peter Deveaux-Isaacs, the Permanent Secretary in the Cabinet Office with responsibility for coordinating the implementation of NHI, sought to strike a conciliatory tone throughout the evening.

While admitting that he does not know what will happen past this current fiscal year with respect to financing the NHI scheme, he stressed that the government will pay for the first and second phases of NHI, ruling out any possible tax hikes.

He said that the government will look at aspects of an alternate NHI plan provided by BIA in order to incorporate some aspects into its own NHI model if it is feasible to do so.

He added that the legislation that will allow for the first two phases of NHI should make their way to Parliament “in a few weeks.”

As far as Dr: Sands goes this plan may have an effect on his pocket book. I am sure that all of the persons on the panel have medical insurance. The Insurance companies do not really care their bottom line is profit and more profit. They rise the medial insurance so often that it has become out of reach for many people. You may pay for thirty years and never make a claim. then you can pay no longer and you become sick. all of your money has gone down the drain. so many persons go to the hospital and do not pay even when they can afford to do so. We should all do our best to stay well and leave the rest to God.

This government doesn't care about anything past a 2017 election bid. A national health insurance plan is a good thing but it has to be well planned and budgeted for. Running out of money in 2018 will not be good for anybody, irrespective of what's in Dr Sands' pocketbook

Birdie, the current health system is like a car that is leaking oil, gas, water and other fluids. At least one gallon lost for every four put in.

The one that it looses goes into the pockets of certain corrupt persons, including those who benefit from sweetheart deals with the PHA.

The corruption has to be stopped before the NHI can be implemented.

These guys just want that one gallon to go from 100 million to four hundred million and we will all pay our money to them for nothing.

That will not help anyone.

That's what i'm thinking. there are so many issues with the Health Care here already..... why add a new, poorly planned scheme ontop of an already faulty system???

It's like that game where you stack the bricks (jumenga?) if the stack is unstable, putting more on top could make everything fall down

QUOTE: the government’s insistence on rolling out a primary care phase of NHI without concentrating on providing people with catastrophic coverage is tantamount to ignoring the most pressing healthcare issues facing Bahamians.

What is the logic? i'm guessing it's just another empty political promise to gain favour for votes.

Canada has a Public HealthCare, and is always looking for new immigrants to come into the country to pay tax to support that system..... Where indeed will the Bahamas get the money to run such a system locally????

Who will be able to get doctors, lawyers and accountants to give up their financial privileges in this country to benefit the common man ???????? ................. that is the crux of this matter Except for total political reform (aka Castro) the status quo will remain well into the future

"he stressed that the government will pay for the first and second phases of NHI, ruling out any possible tax hikes." What a load of Bull. The Bahamas is BROKE, government borrows money every month just to pay the civil servants, where is the money going to appear from? Every Bahamian will be fleeced to pay for this plan that as always with the government of The Bahamas will be rife with corruption, theft, and mismanagement. Is there any wonder right thinking Bahamians are not getting that warm fuzzy feeling when told NHI will be shoved down their throats?

and sadly, this subject only attracts 5 responses, and if we care to look, only 1-2 anytime it is touched.

i do not want nhi, and the insurance companies are leeches. 9and morons and all that other woman said.)

I think people prob just gone keep complaining all as the ship sink and the water cover up they mouth.... The fact that there was a thin turn out for this i think speaks to Bahamian Citizens involvement in their own National Destiny