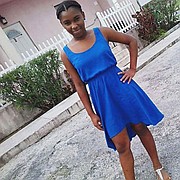 Davionya Farrington, who is missing.

THE mother of a 14-year-old girl who has been missing since Friday said she now “fears the worst” but is still hoping for the safe return of her “quiet, mannerly baby.”

In an interview with The Tribune, Sherral Colebrook said the last time she saw her daughter, Davionya Farrington, was on the morning of November 20, around 7am, when she left their Carmichael Road home to go to H O Nash Junior High School.

Ms Colebrook said when her daughter did not return home at her usual time of 3.45pm, she realised something was wrong.

“School was out and it was 3.45pm and she was not home. Then 4pm, then 5pm, then 6pm (came) and then I started to worry. I started calling around friends that I know and I had a teacher’s number so I messaged her to find out if she had seen or heard from Davionya and to ask some of the students if they had seen her,” Ms Colebrook said.

“When the teacher said she hadn’t seen Davionya all day, I immediately went to the police station. They took a statement and went out looking and told us to keep looking as well. At this point now, I am beyond worried. Her dad and I were looking all weekend but he had to go back to Abaco this morning, but he is trying to see what he can do from there.

“I do not want to imagine what may have happened to her, I am holding on to the fact that for now she is just missing.”

Ms Colebrook said she knows there are stories of teenage girls running away all the time and Bahamians may be insensitive to her plight, but it is “unlike Daivonya” to be gone for so long and not call.

“She is quiet and very mannerly, its always ‘yes ma’am, no ma’am’ so this is not like her at all,” Ms Colebrook said.

“Everyone is in shock, we don’t know what happened and we just want her to come home. We don’t have any leads; no one has seen her. We figured if she left she would have been back Monday morning, but it’s now Monday and still no one has seen her. There is no activity on her Facebook, nothing, it’s like she disappeared.”

Anyone with information on the teen’s whereabouts is asked to contact police at 911 or 919 or contact the nearest police station.

I hope for the best in this situation.