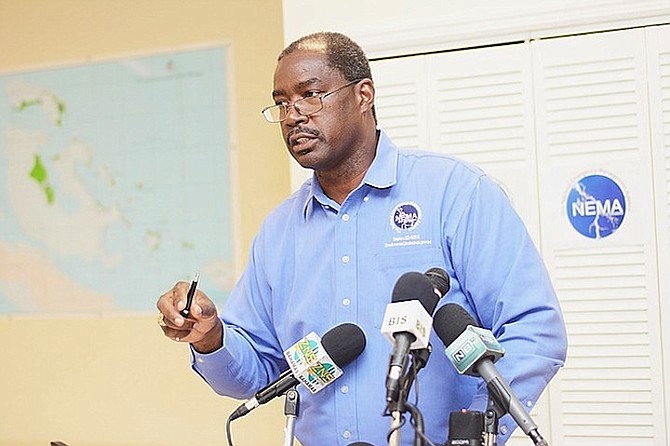 According to Capt Russell, that option remains for damaged structures in areas prone to devastation during hurricanes. He added that the government plans to rebuild some homes on stilts, to minimise damage during storms.

He revealed the plan on Friday while indicating that his agency, in association with the National Reconstruction and Repairs Unit (NRRU), has already spent nearly $800,000 to transport building equipment to those affected islands.

Reports provided by NEMA show that 50 homes throughout the affected areas have already been earmarked for reconstruction. Capt Russell said 25 of the homes are on Long Island, 13 in Acklins and 12 in Crooked Island.

Last month, Prime Minister Perry Christie estimated 836 homes were completely wiped out by Hurricane Joaquin, noting that information from the Department of Social Services revealed that the storm had destroyed 413 homes in Long Island, 227 houses in San Salvador, 123 homes in Acklins, 50 houses in Crooked Island and 23 in Rum Cay.

Capt Russell said his agency, along with the NRRU, also conducted a series of assessments on some of the seven islands seriously affected by the category four storm.

He said that initial figures compiled by NEMA and the NRRU have estimated 963 homes throughout the southern Bahamas will require some degree of repairs.

“We are vigorously involved in the repair programme, where we have employed some 17 teams in these six islands employing some 157 persons to carry out repairs for some of our senior citizens, disabled persons, single-parent families and the general public in that order,” he said.

Asked to clarify the nature of the reconstruction efforts currently planned for the southern islands, Capt Russell insisted that government plans to treat efforts on a case-by-case basis.

He said in some instances, homes would have to be relocated but added that where cases permit, the government plans to use a stilt concept of reconstruction developed in 2011 following Hurricanes Irene and Sandy.

“Where we can relocate we will relocate, but if we have to build back in some of those areas we have a new plan where we propose to build on stilts – two to three foot stilts,” he said.

“So if we need to, we will rebuild on stilts, five feet in some cases. We had tried the concept after Hurricanes Sandy and Irene in 2011 and we discovered that all homes that were built, some 25 homes all survived category four storms. So that is almost a model moving forward if we must build in those areas.”

NEMA has raised roughly $1.9m in donations from the private sector in the wake of Hurricane Joaquin.

Prime Minister Christie has said it would cost almost $57 million to repair government buildings and infrastructure damaged or destroyed during the passage of Hurricane Joaquin.

Last month, Mr Christie that the funding needed for the recovery and repair phase of the hurricane would come by either borrowing from the Caribbean Development Bank, financing from China or by other traditional means of sourcing.

Hurricane Joaquin battered the central and southern Bahamas on October 1 and 2, destroying homes and buildings and causing severe flooding in many areas.

I am wondering whether the Government is responsible for replacing ANY homes in the Bahamas destroyed by hurricane and not covered by insurance policies.

I am also rather surprised that Prime Minister Christie has said it would cost almost $57 million to repair government buildings and infrastructure damaged or destroyed during the passage of Hurricane Joaquin. Surely such buildings were insured by Government, or are we to believe that the deductibles of such insurance would amount to $57 million?

The government does not insure government buildings. The insurance is us the taxpayers via the Public Treasury.

The bottom line is that too many Family Islanders build in areas that are prone to rain flooding or sea surge .................... in a developed country there should be some controls over this type of uncontrolled housing sprawl ................. but who will change the laws or protocols about it?

Also Perry is all over the world begging for money to deal with climate change mitigation ......... but what will be done to improve the roads, airports and vulnerable settlements in these Family Islands that have been affected everytime there was a major storm since Andrew in 1992 ............... are they generally sincere or is this just another means of getting a slush fund???????

If government is going to replace peoples homes then they better be ready to do it each and every time a storm passes through. You can not cherry pick who gets a new home, if peter gets his house blown down and government replaces said home then they must do so for every person whose house is blown down. I wonder what they will do when the big one hits Nassau? This government is just stupid and our P.M. is just trying to buy a few votes.