‘We Weren’T Given Enough Warning’ 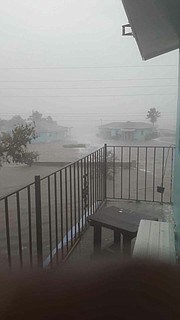 RESIDENTS of Acklins complained that they were not given sufficient warning from the relevant agencies about the passage of Hurricane Joaquin, which left dozens of people from the southern Bahamas trapped inside their homes yesterday due to floods and hurricane force winds.

Major flooding was reported in Exuma, Long Island, Cat Island and Eleuthera. However, the most severe flooding reported up to press time was in Acklins, where power went off Wednesday night limiting phone and Internet access.

According to residents, floodwater was more than three feet high in some areas and gushed into several homes on Acklins yesterday. The Tribune was told that there was no community meeting about the hurricane before the storm approached Acklins.

At least ten people were trapped on nearby Samana Cay on Thursday – over which the eye of the storm was expected to pass – without proper shelter or communication.

Area MP V Alfred Gray admitted that Acklins did not have sufficient warning from government agencies to prepare for the fierce storm, but told reporters what couldn’t get done in advance of Hurricane Joaquin would get done “next time.”

However, National Emergency Management Agency (NEMA) Director Captain Stephen Russell told The Tribune yesterday that all affected islands were “given ample warning” as soon as officials had the relevant information. He said the problem was that some “residents do not want to leave their homes” and they are “refusing to go to the shelters.” He said that in many instances “police had to be called to get persons out.”

Shandira Forbes, a resident of New Providence said her mother, who lives in Acklins told her that “sea water was pouring” into her home.

“My mom is in Lovely Bay – by 9am on Thursday she said the sea barrier had already broken. Acklins is not faring well at all. In Lovely Bay there is a bridge that connects settlements and from yesterday (Wednesday) afternoon they could hardly pass that bridge, now the bridge is underwater,” Ms Forbes said.

“They can’t get into Lovely Bay to assist anyone. My mom is the administrator’s secretary. She was calling for help because the sea was pouring into her house. Her house is built three feet above the ground. People’s roofs were lifting up. No one knew about the storm, so there was no (preparation), there was no meeting, there was nothing. By the time anyone knew that the storm was on the way it was too late.

“The whole of Acklins is under water and Samana Cay does not have any shelter. The shelters that were on the island (Samana Cay), they got knocked down and destroyed from the past hurricanes. When people go over there they take their tents and sleep in tents or sometimes in the bush.”

These sentiments were echoed by Mr Gray, member of Parliament for Mayaguana, Inagua, Crooked Island, Acklins, and Long Cay (MICAL), who said residents should have been given more notice. He also said eight to 10 persons were trapped on Samana Cay and he was “not sure” what would happen to them.

“People from mainland Acklins go to Samana Cay to harvest the cascarilla bark as a way of life. There are eight to 10 people on the cay now from what I understand, and there is temporary housing,” Mr Gray said on Thursday. “If they don’t have a radio to know what’s going on, that would be a problem but more often than not they are in communication.”

“They have shelter but I guess it will be reasonable to think that the shelter might not be able to withstand the strength of a hurricane, category (four). When I was a young boy we used to shelter from the storm in the caves. So if the buildings look like they won’t withstand, there are some caves on the side of the rock that they can go into because it’s not prone to flooding.

“From my understanding, Acklins did not have enough time to prepare and I think they are doing rather well in spite of that. I am told a lot of persons have tried to find high ground because the water is rising and it’s like three feet already. We have to be positive, what we didn’t do this time, what we couldn’t get done, we will get done for next time,” Mr Gray said.

“Acklins was left out of the warning area until this morning (Thursday) so this along with a combination of other events made things very, very difficult for persons in Acklins.”

“There is severe flooding in Acklins and we were told that two persons were trapped in their homes. The problem is that winds are 125mph so we are not encouraging anyone to move and we will not put our emergency rescue teams in jeopardy. Persons are going to have to wait until the wind calms down,” Capt Russell said.

“We warned all the affected islands as soon as we knew but the problem is no one wants to leave their homes. We are having difficulty getting persons to leave their homes. In a few instances we have had to call the police to take persons to the shelters because they were stubborn. Then when the storm is upon us, they want us to send emergency workers during the peak of the storm.”

Recycled old news as the Tribune shuts down for the day!

Alfred Gray is a disgrace of the highest order. While the regular resident may have not paid attention, it was his and his administrators' jobs to be on top of every report from the MET and to react. He needs to resign AGAIN****. How many foul ups will the PM allow him??? Minister of Agriculture in charge of BAMSI food security strategy but planting bananas and papayas, Minister of Agriculture with input on BAMSI construction but no idea that none of the contractors had insurance. Member of the Bahamian Bar , but no idea it was illegal and unethical for him to call a magistrate TWICE to discuss the possibility of granting bail to a convicted prisoner.

How many foul ups does he get??

Christie says leave Gray alone......it was after all just another "teachable moment" for Gray!

In the old days we listened to the radio weather reports and boats had ship radios so they got weather up dates as well.

With smart phones and cell towers with 3g and 4g there is no reason why some of the residents on these islands did not know. Exuma has good communications and satellite TV and all.

So why does everyone blame the Government are you incapable of thinking for yourselves these days?

When I was small you didn't wait for government, you used commonsense and used your own judgment.

I don't blame the government. And I agree the residents must be responsible. My point is, there are people being paid specifically for this scenario and for them to talk about being caught off guard is ridiculous.

Well I take that back I blame the PM for appointing lackluster MPs like Alfred Grey who's involved in screw up after screw up. I blame 20 years of government for politicizing key roles like island administrator.

So the Government failed to warn people? Sorry to say but you haven't seen Government failure yet, that always comes in the aftermath. Private sector efforts will as always outstrip Government efforts, in spite of Government interference. Sadly Government incompetence fouls everything up. Prior experience gives us this "teachable moment"

In days past we would check our aneroid barometers daily during storm season. I still do. Everyone could and should still do the same today.

Alfred Gray told reporters what couldn’t get done in advance of Hurricane Joaquin would get done “next time.”?