Support Given By The Us 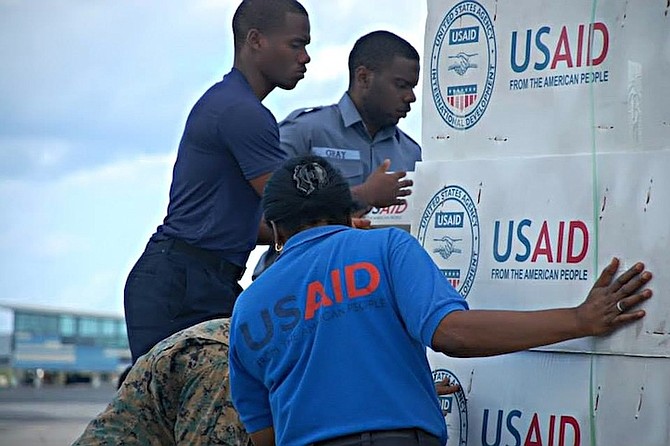 THE US mission to the Bahamas is working together with the government and the Bahamian people to respond in the aftermath of Hurricane Joaquin.

On Saturday, October 3, the US Coast Guard conducted an extensive disaster assessment through the most impacted areas of the Bahamas observing conditions on the ground in Ragged Island, Long Island, Crooked Island, Mayaguana, Samana Cay, San Salvador, the Exumas, Cat Island, and Eleuthera. The US Coast Guard liaison officer and Department of Homeland security attaché was joined by disaster assessment experts from the Office of US Foreign Disaster Assistance (USAID/OFDA), the National Emergency Management Agency (NEMA), the Ministry of Meteorology, Bahamas Civil Aviation, the Ministry of Works and Urban Development, the Royal Bahamas Defence Force (RBDF), and the Bahamas Red Cross.

The information gained from the assessment has been instrumental in directing resources to those most in need.

Prime Minister Perry Christie joined the DEA and RBPF on board a Bell 412 helicopter on a mission to the southern section of Long Island, where humanitarian supplies were delivered. The prime minster was able to meet with residents trapped without food and water. Similar missions, including with Prime Minister Christie, continue on October 6, with an operational focus on communities in and around Crooked Island where some residents have been without food and water since Friday when the storm passed.

Also on October 4, US Chargé d’Affaires Lisa Johnson, with USAID/OFDA, handed over NEMA relief supplies, valued at over $100,000, which were flown in from Miami. RBDF officers supported the handover of the supplies which weighed over 37,000 pounds, and included 200 rolls of plastic sheeting, 500 hygiene kits, 540 kitchen kits, 600 collapsible water containers, and 500 blankets.

The US mission will continue to work collaboratively with the government of the Bahamas in support of its efforts to bring relief to those severely impacted by Hurricane Joaquin.

The hurricane battered parts of the southern and central Bahamas for more than two days last week, with storm conditions felt in some areas from last Wednesday until Friday.

The Bahamas was officially given the all clear from the storm on October 3.

And Christie's new Chinese friends have agreed to use some of the many millions stolen from the Izmirlian family (with Christie's help) to help re-develop the Southern Bahamas!