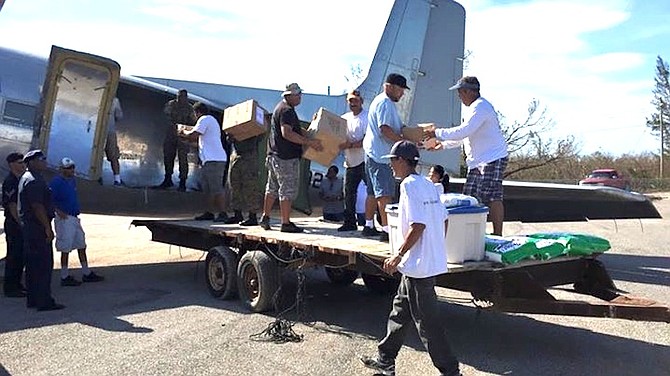 Supplies being unloaded in Deadman's Cay, Long Island this morning.

THE extraordinary public response to appeals for help for the Family Islands devastated by Hurricane Joaquin has resulted in the $500,000 target of donations of cash and emergency supplies set by the SOS - Save Our South initiative being exceeded and allowing HeadKnowles, the relief group, to plan for the next phase of the operation.

“We have achieved our goals, as we are confident that with the supplies, planes, boats and funds received we more than accomplished $500k,” Krystynia Lee d’Arville, public relations director of HeadKnowles, announced yesterday.

The last of the weekend emergency relief flights funded by Save The Bays went to Rum Cay and Long Island yesterday and from today, the Furniture Plus Distribution Centre will be emptied and containers with the remaining emergency supplies shipped by mailboat to the affected islands. At least five 40-foot containers donated by Mike Maura, the president and CEO of Nassau Container Port, will be filled and dispatched over the next couple of days.

The second phase of the operation – codenamed Deliverance – will focus on the rebuilding of the islands, saving and repairing homes, HeadKnowles said. Under the direction of Andrew Knowles, owner of Island Cellular, HeadKnowles has established accounts at building suppliers JBR, Tops Lumber and Plumbing and Pinder Enterprises to which people can donate credits towards acquiring the necessary materials. Discussions are also underway with FYP Builders Mall, the organisation said. The account name for donations is HeadKnowles Hurricane Relief and the appropriate materials will be shipped out from Nassau.

Mrs d’Arville praised The Tribune Media Group and its president, Robert Carron, for its support and that of its listeners and readers. “We at HK cannot thank you and your team enough for the support, collaboration and connections with Tribune Media Group as well as all of your amazing friends, family, business colleagues and more,” she said. “These partnerships enabled our teams to extend massive emergency relief to so many impacted by the storm and, we believe, to also start an evolution amongst the country of community and a ‘we can” attitude’, which is so very needed.”

In order to concentrate fully on the transition to the rebuilding phase, the HeadKnowles organisation advised that the Furniture Plus Distribution Centre will no longer take in donated supplies for transhipment and that the New Oriental Laundry and Cleaners and Island Cellular locations have ceased as collection points.

However, other relief organisations will still accept donations and HeadKnowles said that people could use their YouCaring.com site and make out cheques to them for the cause.

“The challenge to rebuild and restore our southern islands after Hurricane Joaquin is truly daunting,” said Robert Carron, president of the Tribune Media Group. “After the extraordinary outpouring and amazing response to our SOS - Save Our South fundraising initiative we should all now appreciate that if we come together as Bahamians, there is no challenge that we cannot overcome.”

“We are very confident that everyone has food and water now,” said Lana Lee-Brogdon, owner of New Oriental Laundry and Cleaners and part of the HeadKnowles team. On returning from Rum Cay and Long Island yesterday, she estimated that over 200,000 pounds of relief supplies had gone through the distribution centre over the past week or so and described the public response as “incredible”. She said there were still challenges in the affected islands, from floodwaters still cutting off roads in Long Island to the dangers of infections from the stagnant water.

She said that ‘Scalpy’ Cartwright was running “a ferry service” with his dinghy near the settlement of Hamilton, Long Island, where the road was impassable, and that he had received supplies of bleach and chlorine to treat the standing water which completely surrounds his house. She added that there were concerns about the stagnant water. “Lots of bees and flies have been seen around by the grocery store there and it is starting to smell,” she said. She was encouraged to see more activity going on in the islands, re-shingling of roofs for example.

She was unable to put a monetary value to the donated supplies and pointed out that “so many things that were donated were brand new”. Some of the hidden benefits of the HeadKnowles operations were to give people information on family members who were out of communication as a result of the damage caused by the hurricane. “I think why it went so quickly was that people trusted us with their goods,” she said.