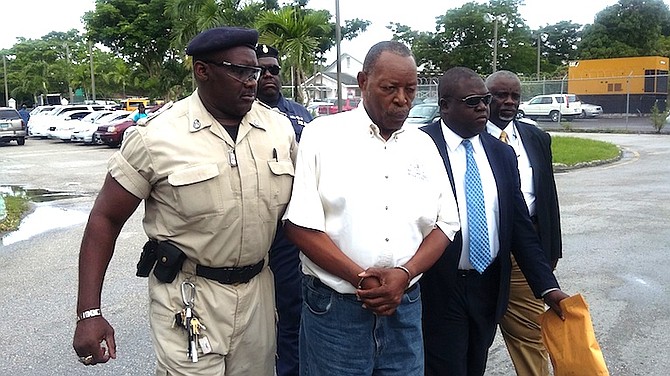 A MAN recently charged with accepting more than $500,000 worth of bribes in connection with generator purchases for the Bahamas Electricity Corporation more than a decade ago will stand trial in nine weeks.

Freddie (Fred) Solomon Ramsey, 78, and his lawyer Roger Minnis appeared before Magistrate Guilimina Archer yesterday for a fixture hearing concerning four counts of conspiracy to commit bribery and 14 counts of bribery, allegedly committed between 1999 and 2003.

The allegations are related to a widespread scheme involving tens of millions of dollars in bribes to countries around the world. They were revealed last year in a US Department of Justice report that French power company Alstom SA allegedly paid more than $300,000 to a BEC board member to influence contracts to a French company between 1999 and 2003.

It is alleged that Ramsey, being concerned with others, conspired to “solicit, or accept any advantages as an inducement to or reward for or used influence in procuring” for ABB Generacion and Alstom SA in the New Providence Expansion Phase Two contract with the Bahamas Electricity Corporation.

It is further alleged that Ramsey, on a dozen occasions during the same period, received a total of $370,395.90 cents in bribes from Alstom SA.

Ramsey pleaded not guilty to all of the charges.

He is a former Free National Movement Council member and former parliamentary candidate for Fox Hill. He is also a former insurance executive.

The Office of the Attorney General will be handling the matter as Cordell Frazier appeared for the Crown.

Next up for court is the AG

Is the AG following the money? You know Ramsey didn't keep all of the money and you know that he had no influence in the bidding process. So, who did he pass on the money to? Is the AG or police force interested in finding out the real culprit or, are they just happy to arrest and prosecute this low lying fruit?