Free - After Being Locked Up For Nine Years Without Trial 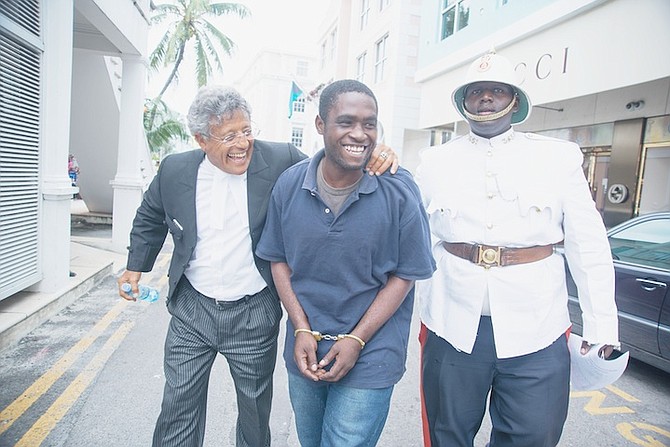 A JUDGE yesterday ordered the immediate release of a Jamaican national who was shuffled back and forth between the former Her Majesty’s Prison and the Carmichael Road Detention Centre for more than nine years without trial on sexual assault, housebreaking and murder charges.

Matthew Sewell, 27, appeared before Senior Justice Stephen Isaacs on a habeas corpus application seeking to challenge the state’s legal basis for holding him at the Detention Centre since November 2014 after the last of four criminal charges was dismissed against him in the Supreme Court.

“Given the circumstances described, including the background, what I’m minded to order today, with a written judgment to follow, is that the respondent, having conceded that the committal order is irregular, a habeas corpus is issued,” the judge said.

The judge ordered that Mr Sewell be released from detention immediately, his travel documents be returned to him immediately and he be allowed 60 days to resolve his legal status in The Bahamas upon making an application to the Immigration Department.

The judge also awarded Mr Sewell legal costs for the application “to be taxed if not agreed.”

When asked for his response to the ruling of Senior Justice Isaacs, Mr Sewell’s lawyer, Fred Smith, QC, told The Tribune: “The Bahamas is not Guantanamo Bay.”

“You can’t just arrest thousands of people, never take them before a court, hold them in some cases like Mr Sewell for up to nine years and not expect consequences. We have to stop trying to reinvent the wheel. These same cases were dealt with in the 1980s, and 1990s.”

Mr Sewell’s ordeal started back in June 2006 when, at the age of 18, he was granted three weeks stay to visit his father in the Bahamas before finding himself accused of raping a six-year-old girl. Yesterday he told The Tribune that he feels “very good” at the outcome of the hearing.

“I feel so very good. I thank God for everything. I am thankful for Fred Smith and everybody who support me,” he said, including his father Clive Sewell, relatives and friends on that list.

Speaking to his nine years in and out of the legal system, the 27-year-old said “it was awful and bad and inhumane.”

“I don’t like it (but) I thank God for everything,” he said.

“I guarantee you that Mr Sewell is going to sue for substantial damages, for assault, battery, false imprisonment, malicious prosecution, especially charging him with a murder count when he was already in Fox Hill (at the prison),” Mr Smith said.

“That was completely malicious just to try and keep him under prosecution but I’m so very pleased that the judge was able to give a ruling very quickly and I’m very much looking forward to the full judgment which I hope will help to guide the immigration authorities on the lawfulness of all these thousands of arrests and detentions in which people are simply never taken before a court.”

Mr Smith cited the historic case of Atain Takitota, which he relied on in his submissions yesterday, where the Japanese man was awarded more than $1 million in damages for his unlawful detention.

Arriving in the Bahamas from Osaka, Japan in August 1992, Mr Takitota was granted permission to remain in the country for one week.

During the same month, after losing all of his money and documents, he was arrested on Paradise Island for vagrancy and detained at Her Majesty’s Prison until October 2000, without being charged or tried.

Once released, Mr Takitota successfully sued the government and was awarded $1,000 for his unlawful detention. Following an appeal to the Court of Appeal in 2006 and the Privy Council in 2009, it was determined that his compensation was insufficient and the Court of Appeal was ordered to increase the amount to reflect his eight years in prison and the suffering and damage that was caused.

In 2009, the Court of Appeal increased compensatory damages to $500,000 and kept exemplary damages to $100,000. A 10 per cent interest per year on the eight years Mr Takitota spent in custody was also awarded by the court.

Kendra Kelly, the Crown’s respondent for yesterday’s hearing, argued that the legal basis for Mr Sewell’s detention had been set out in the applicant’s own affidavit filed to the Supreme Court in May of this year.

She highlighted that on June 20, 2006 he was accused of raping a six-year-old girl who lived next door to where he was residing during his visit. He was not released from custody until May 2008 when he was granted bail until his trial.

He was accused of raping his girlfriend in April 2009, nearly a year later, and was not released on bail for that matter until August 2013.

By the time of his scheduled appearance before Justice Bernard Turner on October 31, 2014 concerning the murder case, the remaining cases he had pending were dismissed after years of awaiting trial.

The murder charge too was dismissed against him, however, he was turned over to the Detention Centre instead of being released.

Ms Kelly argued that this history disputes Mr Smith’s claim that his client was in custody for some nine years as there were periods in between in which Mr Sewell was on bail.

“It is only in November 2014 after the applicant appeared before Justice Turner that the applicant was in detained in custody and that was the subject of the committal order,” Ms Kelly said.

The Crown representative said the Immigration Department was given power by the Immigration Act to detain any person found wanting, without or undeserving of legal status.

“I haven’t heard you say he’s been convicted of anything,” Senior Justice Isaacs said.

“I’m not seeking to say that, but based on the facts (since) his entry into the Bahamas, he has been accused and charged with a number of offences,” Ms Kelly explained.

“Unless he was tried and convicted, in my view, he was wrongly accused,” the judge said.

“I know there are reasons why cases are not heard but it doesn’t make him guilty of anything. It may make the authorities guilty of something,” the judge said.

The judge asked the respondent if she accepted Mr Smith’s argument that the government’s committal order against Mr Sewell had no legal framework or existence in the Immigration Act.

“I will acknowledge there are some issues with the committal order,” Ms Kelly said.

“Can you name them?” Senior Justice Isaacs asked.

“A deportation order should’ve been issued but the Department of Immigration sought to expedite the process by speaking to his father in making arrangements for his return to Jamaica.”

The judge said the father was not legally responsible or obligated to do so nor was the state able to make such requests of an individual they were detaining.

“Our government spends tons of money on repatriations every year,” the judge said.

Ms Kelly noted that even if the court ordered the release of Mr Sewell, the Immigration Department still had the authority to detain him because he still has no status to be in the country.

“Are you suggesting it would make more sense to keep him in custody?” the judge asked.

Mr Smith replied that Mr Sewell’s issue was a simple fix in that the judge could order his release and allow him time to either apply for some status in the Bahamas - as Mr Takitota was allowed - or allow him to renew his passport so that he could return to Jamaica and pursue his dream of joining the military.

Senior Justice Isaacs ultimately ruled that Mr Sewell’s detention was not justified and ordered his immediate release and two months to resolve his status dilemma.

chalk one up for the good guys and take one away from Fweddy Mitchell.....

"Good guys" don't stand accused of raping a minor, or coincidentally charged with a laundry list of additional heinous crimes. Sounds like he got off due to a slow moving court system and general ineptness, not because he is innocent of the charges.

Cas0072 - that is an awfully naive statement. Of course "good guys", or rather "innocent guys get accused of a laundry list of serious offenses in this country. It happens all the time. We have a police force that simply MUST be seen to be winning the fight against crime and maintaining a high "detection rate". The reality is that once you are accused of one crime, rightfully or not, you stand to be accused of others when they can't find the real perpetrator. The attitude is "Aww, well, one fella around here was accused before, it must be him." For God sake, the last two charges this man was accused of happened while he was IN JAIL! Did you not read the story? What kind of serious evidence do you suppose led them to charge an incarcerated man with two crimes committed miles and miles away from the prison where he was being held?

I am well aware that innocent persons can be accused and charged of crimes, which is why having one's day in court in a timely manner is especially important. This is a failure of the Bahamas judicial process, and again it does not mean that he is not guilty of the rape accusations that were obviously made by the alleged victims. The saddest part about this is that his accusers won't have their day in court, while he is paraded around as some kind of martyr. Where there is smoke, there's fire. Neither of us know why this man was believed to be the perpetrator of two crimes that occurred while he was in jail. It could be as simple as a false or mistaken identification or information provided by witnesses thought to be reliable?

Simply put, the justice system is in serious need of an overhaul. The assertion by some folks that this is some personal battle between the minister and Fred Smith is stupid. Our immigration problems and shoddy criminal justice system reach far beyond either man. I am sick of hearing Fred Smith champion human rights only when it serves his own purposes. Equally frustrating is the government's inability to lay down solid legislation which is carried out by a competent and capable border security department. The attorney general's office should be absolutely ashamed of itself. Sloppy work.

Man already do his time, and ein get charged........ so yah. Let him go. If he's a badman, den it's on the Bahamas Judicial system for imprisoning him for so long and never getting to trial. Str8.

PS. Is that Golden Handcuff dat man dey got on?! Jah!