Rigby In Bid For Plp Leadership 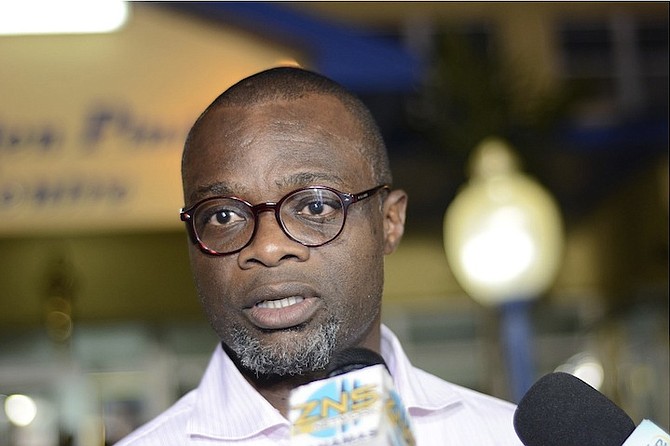 FORMER Chairman of the Progressive Liberal Party Raynard Rigby hinted yesterday that he might run for the position of PLP leader at the party’s convention in November.

However, when contacted by The Tribune to elaborate, Mr Rigby declined to say if this meant he will challenge incumbent party leader Perry Christie at the upcoming convention.

“I’m going to put my name on the list,” was all he would say.

While on the show, Mr Rigby discussed the PLP’s chances of winning the next election and the need for “fresh blood” within the party.

He stressed that the PLP has to begin the transition to new leadership sooner than later and must court young voters if it wants to hold onto power.

“We can’t be talking about building a bridge to the future for the next 20 years,” Mr Rigby said. “The bridge ought to have been built, got to be ready to be walked on, ran on and travelled on and we have to ensure that we are ready to position the party for the new kind of Bahamian that is upon us.”

He added: “There are a group of leaders in our party, and I say leaders in a broad sense, who do not get what the new Bahamas is about. Who don’t understand the degree of suffering and hopelessness that so many are feeling out there, who don’t recognise the level of despair that people are feeling. They are out of depth.”

Mr Rigby said younger members of the PLP are “frustrated” with the party for not living up to their expectations.

“And that’s why it’s important in the next convention for us to ensure that the party reflects the new Bahamas. The days of marshalling support by those who are pensioners are over. If you look at the demographics of the Bahamas, the people who are going to determine the next election are those between the ages of 18 and 35, maybe 38.

“If the PLP is to win the next election, the party’s leadership must reflect the demographic so that we can reach out to them, talk to them, understand their sufferings and disappointments, make the necessary corrections and lay out a vision and plan which corresponds to what their shared view is of the future of the Bahamas.”

Last week, during an interview with The Tribune, Mr Rigby challenged party leader-hopefuls to put themselves up for nomination regardless of whether Prime Minister Perry Christie decides to seek another term.

At the time, Mr Rigby said politicians could not expect leadership to be handed to them on a “silver platter”, and forecast that Mr Christie will remain tight lipped over his political future because he expected them to battle it out just as he did.

He said there was no such thing as “succession planning” in politics as he called for potential candidates to make good on their intentions and put up a fight for top post.

Earlier this year, Minister of Tourism Obie Wilchcombe and Minister of Works Philip “Brave” Davis both revealed their ambitions of leading the PLP and one day becoming prime minister.

However, both men said they would not challenge Mr Christie for the party’s top post if he decides to stay on.

Why not??!! I say go for it. Lord knows this decrepit party really does need young blood with great ideas.(Even though Rigby looks like he needs a walking cane) But even if Christ himself comes down to earth and lead this party I would never vote for them. The PLP is responsible for the downfall of the Bahamas and has stripped thousands of Bahamians of their dignity. History will not be kind to any of its members.

Yep, time to clean house for the PLP, and as a former chair, he knows the skeletons and the dirty closets, and who is in the closet.

While i can agree with his expressed sentiments, i fear it is just empty talk aimed at gaining the support of the underclass people of this country......... which is what the PLP strategy has been all along, while they step on the same poor people who vote for them

.....both men said they would not challenge Mr Christie.... They can't swim in vomit if it goes sour, obviously !!!

New blood for sure! Need a complete transfusion!!! get rid of these old decrepit, out of touch politicians and get someone in there that is in touch with the wants/needs of the people...(but we can only hope) he's not bitch slapped for his efforts by the PM and others.....

Poly = many in latin... Ticks = blood-sucking parasites - you can figure out the rest!

Comrades, don't overlook all the "Thank you Jesus" shouting for the former PLP Chairman Rigby, running to replace PM Christie - is only coming from the red opposition benches up in Honourable House of Assembly.
This is about as exciting as the news that Marsh Harbour's Edison, is ready run again come the 2017 General - where the "Thank you Jesus" can now be heard coming from across the governing side House isles.
Pinch me alert me, why I needs know that both these man's are playing around me mind.
Oh yes, soon that other Abacoian, "The "Fisherman's from Cooper's Town," be's making his big return pronouncement. May Her Majesty da Queen exercise her Royal pen to block both Rigby and Papa from their 2017 General's political aspirations.

Rigby has a better chance of giving birth......

@Tal-Why don't you let that fisherman from Abaco retire in peace. You are so hooked on Ingraham til it ain funny. But no matter how you look at it, It is undisputable that Ingraham has been the BEST prime minister the Bahamas has ever had to date.

Well at least he is trying something. Narcissist 1 and 2 aka Brave Davis and Obie Wilchcombe, who haven't had a compelling idea in years, waiting for Perry to decide and to be ordained. And Shane Gibson ain't too far behind. Not a spine among them. At least BJ Nottage tried to do something and run (did they give him National Security to punish him for running against Perry? lol) Those three just sitting in wait like sly foxes. They are about to get the shock of their lives. To The Back of The Line- right behind Fred, whose recent tactics, speak to the dictatorship that might come if he is ever elected.