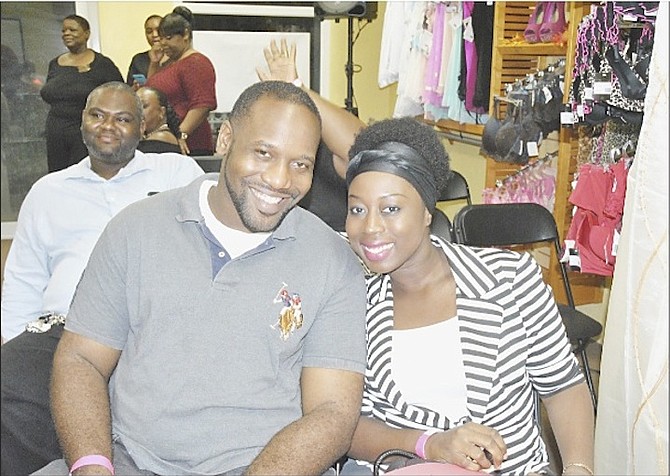 One of the couples taking part in the Happy Marriage Club.

FOR many couples walking down the aisle and saying “I do” is the easy part; the true challenge comes when trying to successfully mesh two different lives to sustain a long and healthy marriage.

After the big wedding day, many couples are left without the tools to properly navigate their lives and their marriages, which eventually leads to a loss of the spark they once had.

To help couples restore and sustain the beauty of intimacy in their marriage, Anishka Culmer has founded the Happy Marriage Club, which held its first meeting for couples last weekend.

The club is an extension of the Marriage Bed, a unique company started by Mrs Culmer to help married people on their journey.

The Marriage Bed liaises with the very best in all professional fields related to its work. The company, Mrs Culmer said, strongly believes in offering credible sources with solid foundations in reference to education and experience.

“It has become very apparent that married folks are usually left out of the social scenes, (labelled) by others as miserable and boring. Hence, our decision to design our efforts toward married people only,” she told Tribune Woman.

From membership clubs and interactive events, to sensual classes and couple’s therapy, the Marriage Bed, Mrs Culmer said, seeks to inspire married couples to step out of their normal routines to make time for intimacy, passion and excitement in a safe, mature atmosphere with others who are on the same journey.

Mrs Culmer started the Marriage Bed after it became apparent to her that there were many couples in the Bahamas who needed help but did not no where to get it.

Mrs Culmer said that having been married for 10 years herself, she knows exactly what kind of struggles couples face, including challenges brought on by having children, financial troubles and more.

“A lot of people don’t realise that when they get married that there are a whole lot of challenges that they may not be prepared for, and so usually after the honeymoon it’s kind of like you wake up and it’s now a reality. And a lot of the things you did not think about before getting married start taking place and you are lost,” she said.

“I saw this quote before that I use and that I send out to my couples, and its called ‘The Marriage Box’ and it talks about the box being an empty box. Marriage does not come with all of those things. You have to actually put stuff in the box to get something out of the box. If you do not put anything into the box, it is empty. So if you are not putting romance in there and love and care in there you cannot expect to get those things out go it. You marriage is what you make it.”

While the Happy Marriage Club is strictly for married couples, Mrs Culmer said she will also be hosting events for engaged couples who are about to take that step.

“I am going to have an engagement event so that people can see what marriage really is. It is a lot of work first of all. Marriages are different and it depends on the people that are in the marriage,” she said.

“For me marriage is a team of two people that work together to navigate through life. You have to respect each other enough and love each other enough to know how to work out your differences and bring your differences together to use them for good. A lot of times by the time as we reach past the honeymoon phase we see a lot of the little things we did not see about the person before. Sometimes we focus so much on the negative and we also forget the good stuff about marriage and why you decided to marry this man in first place. So I really want to help couples get back to that place they were in when they got married. I want to also help them understand that people grow and they change, because no one is going to stay the same,” she said.

The couples part of the Happy Marriage Club will meet on a consistent basis. Mrs Culmer said couples should also keep abreast of the Marriage Bed’s activities because there will be a number of upcoming unique and exciting events.