But what about the $5,000 for Leevan Sands and Trevor Barry? 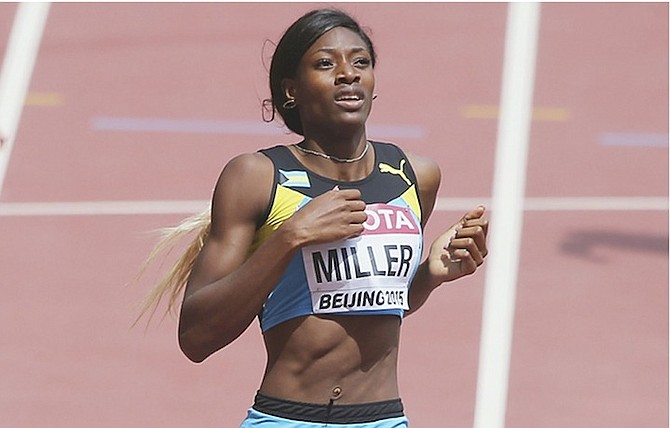 The Ministry of Youth, Sports and Culture is expected to pay out some $50,000 in incentives to women’s 400 metres silver medallist Shaunae Miller, men’s 400m hurdles bronze medallist Jeffery Gibson and high jumper Donald Thomas for making the top eight as finalists at the 15th IAAF World Championships in Beijing, China.

But national triple jump record holder Leevan ‘Superman’ Sands and high jumper Trevor Barry are both questioning why they are being excluded from receiving the $5,000 when they made the final for their respective events in Beijing. Unlike the track events where the top eight (with the exception of the distance races) carry the top eight into the final, the field events have a total of 12 athletes qualified for the final.

According to Timothy Munnings, the director of sports, the ministry’s sports policy calls for all gold medallists at the Olympic Games or World Championships to receive $40,000, the silver $30,000 and bronze $15,000, while all those athletes making the top eight will collect $5,000.

When asked why they were not included, Munnings said the sports policy only calls for the top eight and in the case of Sands, who finished 10th in the triple jump and Barry, who was 10th overall in the high jump, will have to write into the ministry for clarification or speak directly with Minister of Youth, Sports and Culture Dr Daniel Johnson, who has the power to make any exception.

Johnson was unavailable for comments up to press time last night.

As it stands now, Miller is expected to receive $30,000 for her silver in a personal best of 49.47 seconds to finish behind American Allyson Felix’s gold medal run of 49.26 for the world leading time and Gibson, who lowered his national record to 48.17 for the bronze behind Kenya’s Nichlas Bett (world leading 47.79) and Russia’s Denis Kudryavtsev (national record of 48.05), will pick up a cheque for $15,000.

Thomas, on the other hand, will collect $5,000 for finishing sixth at 7-feet, 6-inches in the men’s high jump final that saw Candian Derek Drouin secure the gold with 7-8 followed by Ukraine’s Bohden Bondarenko and China’s Guowei Zhang in a tie for the silver at 7-7 3/4. Barry was also a finalist, placing 10th at 7-4 1/2.

Sands found himself in the same situation as Barry as he got 10th in the men’s triple jump final with 54-8 3/4. The event was won by American Christian Taylor with a world leading lap of 59-9 with Cuban Pedro Pichardo getting the silver with 58-2 and Nelson Evora of Portugal taking the bronze with 57-5 3/4.

In what has been a fantastic comeback year for Sands, who has bounced back miraculously after undergoing surgery to repair a torn knee in an injury he sustained competing in the final of the 2012 London Olympics, noted that he was quite disappointed on hearing the news.

“I read the sports policy and it says elite athletes that make the final are eligible to receive $5,000. After the first day of competition in the triple jump, it said Leevan Sands made the final. So I had the final the next day. In the field event, they take the top 12.

“So you have 12 finalists in the field events, In the track, they only have eight lanes, so you have eight finalists. Are they saying that I didn’t make the final? That’s my question. Did I make the final? I know I worked very hard this year to achieve what I did this year. It wasn’t easy, so I expected to at least get the compensation from the government as a finalist.”

Sands said he only made the inquiry after he heard that Munnings had indicated in a press statement in Beijing that only the top eight will be compensated. But Sands said he’s confused because the sports policy said once you make the final, you get the incentive from the government.

“So I’m very disappointed because I worked very hard for the past two years and I think it is well deserved,” he said.

Coupled with that, Sands said he was told by other athletes in the past, who were rewarded for advancing to the final in field events even though they didn’t medal or get into the top eight, so he still can’t understand why he and Barry are not included this year.

While there maybe some consideration given to Sands and Barry for getting into the final, Munnings also noted that the ministry is reviewing its subvention to the elite athletes as there has been a number of changes on who is still on, who has been removed and who has been added.

He said by the end of the month, the ministry should be able to provide a definitive number and provide a new contract for the athletes to sign, which outlines what is expected of them and what procedure will be used to distribute the funds to the athletes.