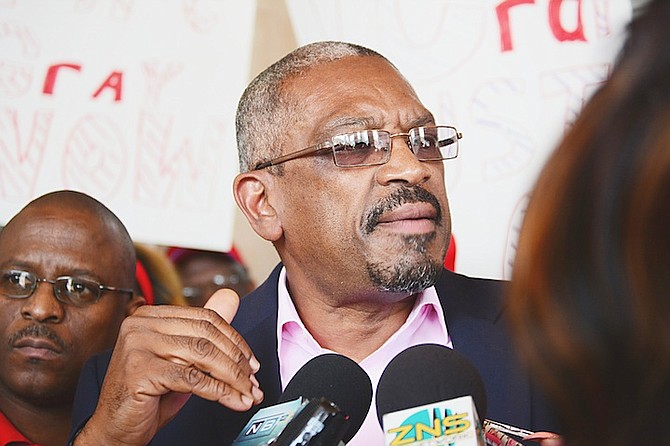 AS the country’s homicide count continues climb, Free National Movement Leader Dr Hubert Minnis said the capital has turned into a gun town under the watch of the Progressive Liberal Party, which struggles to get a handle on crime.

Dr Minnis blasted the government yesterday insisting the Christie administration is “pussyfooting” around with crime instead of aggressively taking measures to break the cycle of criminal activity.

The Killarney MP said the government needed to consider stiffening the penalty for gun traffickers because he was of the view that the supplier was just as guilty as the person pulling the trigger.

Dr Minnis also criticised the government yesterday as the murder count rose to 106 following the shooting death of a man who was driving on Mount Royal Avenue around 8am yesterday.

“The criminals are destroying this country,” Dr Minnis said. “And sad to say, but guns are the leading weapon of choice. Nassau is turning into a gun town.

“If we are serious, we must advocate for harsher and stricter penalties. The government is pussyfooting with crime and it is getting worse and worse.”

“The government continues to pump millions of dollars into Urban Renewal. But yet still crime is up. What is its purpose? Has it really achieved the objective? Urban Renewal has failed to make a dent on crime.”

“The inner city is represented by (National Security Minister) Dr Bernard Nottage and Prime Minister Perry Christie but those areas are where we see the most crime.”

The suggestions are a part of the FNM’s 26-point crime plan which also includes: ramped up police presence; gun amnesty; strengthened intelligence through networking with community leaders and faith-based groups; increased use of technology, such as gunshot detection devices, mobile forensic equipment, and drones; victim counselling; and the establishment of a non-partisan Crime Commission.

FNM Chairman Michael Pintard has called for the prime minister to replace Dr Nottage as national security minister over his uninspired and lethargic response to mounting crime.

He was speaking in response to Dr Nottage’s recent assertion that his critics were in for a “sad awakening” if they thought there was a quick fix for crime.

“What’s sad is that he’s just realised it,” Mr Pintard said recently, “because he was one of the persons most critical of the former government. He is asking for a bipartisan approach now, which is what our (FNM) plan has always been.

“He is ill-suited for the job, his comments are pretty much the same. Now that the shoe is on the other foot he has a different look on the matter. He’s out of energy, out of ideas.

“The prime minister needs to look at an alternative, someone who would have credibility to deal with these issues. Dr Nottage is not it, and Keith Bell (junior minister of national security) is substantially worse than him,” Mr Pintard said.

Comrades, is this Her Majesty's government-in-waiting red leader anxious to throw off his own party's image of their leader much too bor'ing, for them come the 2017 General?

They should call an emergency cabinet meeting to put a halt to every penny going into the UR program..It is NOT working. The only reason to continue it in its current form, with apologists Mother Pratt, Algernon Allen and Lunch Lady Reckley at the helm, is to secure the safe passage of millions of dollars straight to some PLP "who can't earn an honest dollar's" pockets. After in excess of 15 million dollars, they have not achieved ONE objective. The "another UR project" on EASTERN ROAD, that they paid God knows how much money to "weed", has grass up to your eyeballs now. Wasted money. Washed out ideas. small time criminals dying in the streets while the real Crime Bosses moving behind the gate, buying yachts and fancy cars and handed the gates to the city.

When you have an executive branch that does not obey the laws of the land and ignores the verdict of the Judiciary (Blackbeards Cay) you have lost the rule of law. Why would the citizens of a country obey the law if they see the people that are supposed to be leaders in that country breaking laws. We must get rid of the corrupt PLP and bring back the RULE OF LAW. This town has gone down the path we are on with the pirates of yesteryear, the only difference is those pirates probably had more honor than the ones today. We need a Woods Rodgers in the worst possible way to hang them or run them out of town.

Urban renewal is not the problem and shouldn't be used as a political football by the FNM or salvation for crime by the PLP. What needs to stop is the corruption around urban renewal - conceptually I don't think it's a bad idea and I personally like the bands made up of young people. In other words both parties are playing politricks with the poor and it is a disgrace.

It's not a political football it's a slush fund, it's always been a slush fund. This program was never engineered to produce any change. It makes no sense. They put Mother Pratt and a lunch lady in charge of a social service program.Does anyone in their right mind think that's a recipe for success? So if the goal wasn't "renewal" and they've dumped 15million into it, what was the goal?

I am sick of these sexy phrases that these dumb politicians throw around without knowing what they mean. How many businesses has the urban renewal program started in Bain town and trained the residents of Bain Town to perform the work ? real businesses, not landscaping and construction (no disrespect to landscapers and construction workers)

I concur. If Urban was not a slush fund and used as a vote buying tool, it would be fantastic. These things MUST benefit ALL Bahamians, be managed professionally, with transparency and accountability. The bidding must be open to all.