Bahamas Ready For An Out-Of-This-World Visitor 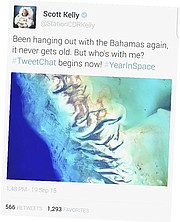 FOR astronaut Scott Kelly, the sight of The Bahamas from his vantage point on board the International Space Station has been a regular talking point on Twitter - sending out photos of the beauty of the nation as seen from space.

And now, the country’s Ministry of Tourism is to extend an invitation to the astronaut to come and see that same beauty at close quarters once his year-long mission orbiting the earth comes to an end.

Kelly has been in orbit for the last six months and has been documenting his voyage on social media, sharing images of the earth from his vantage point with more than 421,000 followers. He has posted about the beauty of The Bahamas on several occasions.

On April 26, the American astronaut showed his daughter “the most beautiful place from space” when he tweeted an image of The Bahamas.

On July 19, he posted another stunning image of the archipelago with the comment, “Bahamas, the strokes of your watercolors are always a refreshing sight.”

His most recent images of The Bahamas from space came on September 18th and 19th when he posted, “The Bahamas never fails to impress!” and “Been hanging out with The Bahamas again, it never gets old.”

Joy Jibrilu, the director general of the ministry, said: “This is amazing organic marketing for us.

Here is this astronaut, who the whole world is watching because he is making history, talking about how beautiful our country is. We must bring Scott Kelly here to The Bahamas, not only to thank him, but also to show him the country that is bringing him so much joy while he is in space.”

If Kelly stays until March 3, 2016, Kelly’s 342-day visit will be the longest consecutive stay in orbit by a NASA astronaut.

“After such a mission, who wouldn’t want to relax on our beautiful beaches? I think he has earned himself a much-needed vacation in The Bahamas.

“We would be more than happy to host him and his family,” Ms Jibrilu said.

Unfortunately, I never share your stories with my social media friends. Even though a story like this is great, and promotes the Bahamas, and science, I don't want them to see all the crime and murders on every page of any Bahamian news website. If I shared that, my friend's resort would lose all tourism and they would close. Your country could be so good, but bad management is ruining it.

Every country has crime, but nassau is so small almost all crime is reported, which isn't true for other countries. It makes what is truely a friendly island seem bad because everyday goodness is not reported.

I think your international friends would note if they did read through the tribune that it is very rare for tourist to be the victims of crime, most especially violent crime, here in the bahamas.

In the downtown core there is close to 3 million people.

Now you can see why the Bahamas is an unsafe war zone.

Hong Kong is an island (just like Nassau) with millions of people ....... how many murders occur in Hong Kong ........ or Oahu, or Barbados??? We look for excuses to the crime problem instead of using the 3000 policemen and 1500 defence force officers to root out the criminals ....... but the government have a good strategy now ....... wait till the Courts release the criminals on bail and then shoot them in undercover "raids"

Thanks be to God for the beautiful Bahamas. May God continue to bless us. and it is my happy that all will work together to solve the crime problems. and may the blame games come to an end

birdie.....: You should not call the name God while you support this Godless Government. Sorry. And He don't like ugly.