A hero’s welcome for Miller and Eve 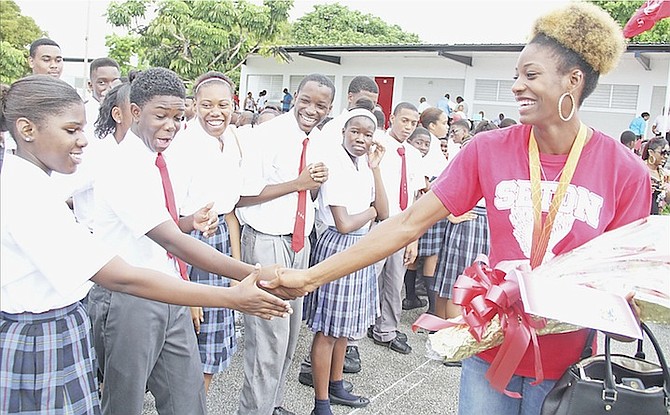 It was a hero’s welcome for a pair of St Augustine’s College alumnus as they returned to their alma mater.

World Championship silver medallist and sprint sensation Shaunae Miller and retired javelin thrower Laverne Eve, were greeted to a hero’s welcome as they spent the early morning hours at the SAC campus yesterday.

Sporting their former house t-shirts, Miller (Seton) and Eve (Bernard) were honoured with tributes from the students, gift bags and bouquets.

Additionally, Miller was given a portrait painting done by Big Red Machine coach and renowned artist Marco Mullings. It was the latest stop in the tour.

Miller returned home after she concluded an historic season with a 400 metre win at the IAAF Diamond League in Brussels, Belgium.

During the 2015 season, she also broke the Bahamian national record of 22.14 seconds in winning the 200 metres in a meet in Kingston, Jamaica, on May 9 and ran a personal best of 49.67 for the silver behind American Allyson Felix in Beijing on August 27.

Eve was recently inducted into the Hall of Fame for her collegiate alma mater, Louisiana State University.

Following her career at SAC, Eve went on to the star for the Tigers where she rewrote the record. She was a discus, shot and javelin thrower from 1986-88, helping to guide the Lady Tigers to three NCAA championships.

In 1987, she was the individual NCAA champion for javelin. That same year she set the school record for the longest javelin throw - 204 feet, nine inches - a mark that still stands today.

Eve, a two time All-American, helped lead the LSU women’s track and field team to the 1987 NCAA outdoor championship, a title which started a streak of 11 straight outdoor NCAA crowns for the Lady Tigers.

She went on to compete in five Olympic Games, eight IAAF World Championships and win 22 gold medals at various events, including one at the 2002 Commonwealth Games.

She enjoyed her greatest moment on the international scene when she was sixth in the javelin at the Olympics in 2004 in Athens, Greece.